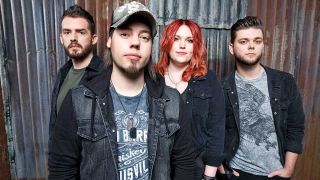 Deluxe revisions of albums are traditionally the types of package bands compile as their careers begin to wind down rather than ramp up, but that's what Stone Broken have done.

The band's debut album crept out in 2016, and has since gone on to become something of a classic of the NWOCR movement. Now it's been given a well-deserved lick of paint: remastered, reissued with new artwork, available on vinyl for the first time, and embellished with six extra tracks.

"All In Time wasn’t just a stepping stone for us," says frontman Rich Moss. "It wasn’t just our debut record. It literally changed our lives! When we were writing the album, I don’t think any of us realised just how important it was going to be. We released it independently, and within the first couple of hours the CD stocks had all sold out!

"We feel now is the right moment to put All In Time back into production and to let people have a piece of our history.”

Below, Moss takes us through the album, track-by-track.

The new version of All In Time is out now.

Stone Broken are currently on tour with Black Star Riders.

"This is what we call the ‘Finisher’. It’s the song that seals the deal. We have finished our live set with this song for around four years, whether we're headlining or supporting. And no matter which country we're playing in, the crowd love it.

"When we were writing it, we were imagining the audience singing along. We needed that big sing-along chorus, and I think we nailed it. Every single time we play it the audience get involved… and that’s what playing live is all about!

"When we were writing this song we wanted to inspire people, to motivate them to strive and push themselves, just as we did when starting the band. We had all been in bands before that didn’t really work out, but we didn’t let that get in the way of us giving our all to this band. And we wanted to share that message. It was probably the first song we wrote with an actual message rather than telling a story."

"I mean, it starts off with a resonator guitar. You probably guessed where this song's influences came from. We love all kinds of music, and we wanted a song that sounded like it came from 'the south', with gang vocals shouting 'HEY' to the lead slide guitar in the intro. It ticked all of the boxes and became a favourite of ours to play live, because it was a bit different."

"This was the first song we filmed a video for - we released it as a single from the original EP. Now the funny thing is, we thought the song was just 'ok' when we headed in to the studio, but once we heard the final mix it had completely flipped. We loved the track. It had everything we wanted featuring in it: riffs, melody, stomp…everything that makes us sound like us. It was a great introduction to the band!"

"It’s quite nice to be able to talk about a record in retrospect. It allows you to talk about the songs after you have lived with them for sometime. Wait For You turned into something really special for the band, and became 'The Song' of the record.

"At one of our headline shows – where we did a little acoustic set in the middle of our show, all sat down on stools – we started to play the song fully acoustic. Just before the final chorus, Rich was going to ask the audience if they would sing with him, but it turned out that he didn’t even need to ask. They just took over. One of the most emotional moments the band have encountered on the road."

"As some of you may know, the record was actually comprised of two EPs, but instead of bringing the second one out as an EP, we just added new songs to the first to create All In Time.

"Save Tomorrow was actually the first song that we wrote for the second EP, and we had to write it super quickly. We were headlining our hometown, and for some reason we announced that we would play some new songs, but we didn’t actually have any! So we got our heads together and Save Tomorrow was the song that came out of it."

"A couple of tracks on this record were inspired by the loss of an old band mate that used to play with Rich and Robyn. This Life is one of those songs. The lead line in the song 'I’m not gonna waste this life' was literally a note to self, and was one of the sentiments behind starting Stone Broken."

"When we're writing new material, we have to give the tracks a temporary title so that we can easily identify each track. So, for instance, Fall Back Down was called 'Zombie Stomp' and Stay All Night was called 'Mr. Crackle'... but Another Day was always called Another Day. The working title actually inspired the direction of the song, and a story was written around those two words."

"This was the first complete song that Stone Broken wrote. We had a really old cooling fan in our first lock up which was slightly broke, but it did the job just enough. It would repeatedly click every time we turned it on, so at one rehearsal Rich decided to jam a riff to its tempo, and the main intro riff was born."

"There feels like there's so much we could write about this song. It was kind of the turning point in the band when it was released. We struggled for ages getting it right: Chris had a riff idea which then turned in to the musical hook of the song, the chorus nearly didn’t happen because Rich was stuck, Robyn wrote the half-time section when we were jamming the structures out, and Kie provided the perfect bass line. It took a while to get it all right, but we got there and we're glad that we did!"