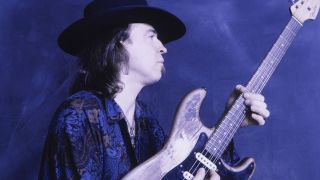 When Stevie Ray Vaughan died at 35 in a 1990 helicopter crash, moments after participating in a triumphant, concert-closing jam with Eric Clapton, Buddy Guy, Robert Cray and his elder brother Jimmie Vaughan, it was a mark of the love and respect in which he was held by the blues community that Guy and John Lee Hooker dedicated their next albums to his memory.

After catapulting to mainstream attention with his Albert King-inspired licks on David Bowie’s Let’s Dance album and following up with his own major-label debut, Texas Flood, his searing post-Hendrix Stratocastering, huskily intense voice, extravagant onstage showmanship and distinctive Tex-Mex bandido clobber had rendered him the most prominent and convincing blues-rock ambassador to emerge since the late 60s.

Born and raised in Dallas, Texas, and following in the guitar-playing footsteps of elder brother and future Fabulous Thunderbird Jimmie, he discovered both great British invasion post-bluesers Clapton, Beck and Page, and the original titans Buddy Guy, Otis Rush and the Three King, though the primary influences who eventually coloured his own music – especially after the brothers relocated to Austin – were Jimi Hendrix and Albert King.

Yet there were downsides to his success. The first was a flock of wannabe post-Vaughanists who copied just about everything he played or wore; the second (and more serious) was a massive coke and booze habit which not only affected his performances but damn near killed him before he cleaned up and returned with In Step, his best album yet.

Out of traction and back in action, he was literally a new man… before a helicopter crashing into a mountainside on a foggy night robbed him of the life his rigorous rehab had just saved. Planet Blues went into mass mourning.

A soup-to-nuts journey of blues mastery, including posthumous releases.

Your basic one-stop-shop starter kit: three CDs and a DVD, nicely packaged and (for once) reasonably priced. The core SRV catalogue of material released in his lifetime and with his input was comparatively slender: five studio albums (including the collaboration with brother Jimmie), one live shot and a few sessions and jams. However, as was the case with his idol Jimi Hendrix, his oeuvre was posthumously bulked up with all manner of live recordings and studio outtakes to the point where he released more stuff dead than alive.

This set does a more than reet-canny job of filleting the available material into a soup-to-nuts narrative trajectory which takes our hero all the way from early stints in other people’s bands, through his beginnings as a featured artist, to his later triumphs.

All the classic high spots are duly hit, with generous helpings from Texas Flood, Couldn’t Stand The Weather, Soul To Soul and In Step, plus plenty of live stuff and the obligatory spikings of previously unreleased rarities.

All’n all, a very fair representation of who SRV was and what he did, and a perfect catch-up for inquisitive latecomers, those never previously convinced and anyone else who just never got around to investigating him before.

If you prefer your introductions to an artist more slimline and condensed, however, there are always the two-CD Essential Stevie Ray Vaughan and the single-disc Very Best Of.View Deal

Superior - The releases that built his reputation

The final studio record offers a glimpse of what could have been.

The last studio album Stevie Ray Vaughan completed and released during his lifetime was, in many ways, his best. Free of his debilitating drink and drug addictions and with his primal influences fully assimilated, his post-rehab clarity of vision had finally set him on the path to developing a songwriting voice – just check Crossfire, Tightrope and The House Is Rockin’, which Jerry Lee Lewis really should cover – in the same league as his guitaring and singing, with a fresh new funk and focus which boded well for the future that it turned out he didn’t have. For many contemporary artists In Step represents something of a ground zero of modern blues. It hasn’t half helped sell a lot of Strats an’ all.View Deal

SRV and Double Trouble on fire in this mid-80s live collection.

Not the first great live album to be heartily disliked by its players (Dr Feelgood’s Stupidity) or patched from end to end with overdubs (Thin Lizzy’s Live And Dangerous), this assemblage of 1985-6 Double Trouble shows, cherry-picking the repertoire from the first three studio records, blazes pretty much from start to finish – despite a version of Hendrix’s Voodoo Chile (Slight Return) that’s even longer and more superfluous than the one on Couldn’t Stand The Weather.

The Sky Is Crying (Sony)

Offcuts of blues standards and a few acoustic surprises.

Paradoxically, this posthumous collection of outtakes from SRV’s four original studio albums – lovingly assembled by his brother Jimmie – makes for more intriguing listening than any of those originals on those albums other than In Step. For a start, it includes the instrumentals Little Wing, his finest Hendrix interpretation, and his exuberant roughing-up of Lonnie Mack’s Wham!, not to mention the moving acoustic take of Doyle Bramhall’s Life By The Drop.

Add to the aforementioned treats a heaping handful of classics such as Elmore James’s title track, a couple of Howlin’ Wolf standards and the jazzy Chitlins Con Carne and your talking about an essential purchase.View Deal

Most of SRV’s recordings feature him in the bare bones setting of a trio or quartet, so it’s a lot of fun to hear him do his stuff backed by a bigger ensemble. This set, recorded at NYC’s Carnegie Hall on October 4, 1984, the day after Stevie’s 30th birthday, has big bro Jimmie (rhythm guitar), Dr John (piano) and Angela Strehli (vocals) and the blasting Roomful Of Blues horn section joining in the fun for the second half, plus repertoire (including stuff from Alberts Collins and King) you won’t find on any of his other records. On this occasion the audience is at least as noisy and cranked-up as the band.View Deal

Siblings join forces for a double helping of contagious grooves.

Unselfconscious big fun which fulfilled the bros’ long-held ambition to cut a record together, genially overseen by producer/guitarist Nile ‘Chic’ Rodgers, with whom SRV had worked on Bowie’s Let’s Dance. Liberated from the constraints of the Double Trouble/Fab Thunderbirds formats, they trade off both guitar and vocal lines, and fool around with soul, funk (check out Baboom/Mama Said), country and western swing (on the splendidly titled Hillbillies From Outer Space) before playing a manic Albert King-style duet on the same guitar. Warning: their obvious good time is highly infectious.View Deal

In The Beginning (Sony)

Early work in progress served up before it’s ready for the turntable.

A little bit of prehistory in the form of a live local radio shot from 1980, before the classic rhythm section came together (with Jackie Newhouse on bass rather than Tommy Shannon) while SRV was still in the process of swallowing his influences, but before he had fully digested them. Instructive, perhaps, but less than satisfying: for geeks and completists only.View Deal