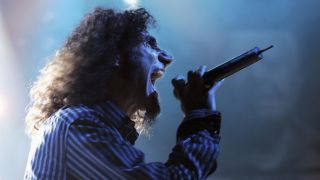 System Of A Down guitarist Daron Malakian looks me up quizzically as he tap-taps his pipe on a nearby table. “Classic Rock, huh?” That’s a weird one. Why d’you wanna talk to a band like us?”

Maybe an explanation in in order. My first serious encounter with System Of A Down took place a little under two years ago, when I saw them play second-on-the-bill to Metallica at the 2003 Reading Festival. I was, I inform Malakian, as blown away as I was baffled by his band. ‘Eccentric’, ‘histrionic’, ‘self-consciously wacky’ and ‘brutal’ were some of the words I used. In my review, I said that if I was 15 years old again, System would probably be my favourite group of all time.

The performance was best summed up by an on-stage remark from vocalist Serj Tankian. At the end of one particularly mind-melting, angry, operatic, stop-start speed-metal song, he offered: “Well, that’s what you get for smoking too much dope.”

Malakian laughs long and loud. He finishes tap-tapping his pipe and plunges his hand into a plastic bag that on first sight looks to be full of Bombay Mix. He smiles conspiratorially as he extracts a fistful of what on closer inspection reveals itself to be… well, let’s just say it isn’t Old Shag, either.

Malakian fuels up a lighter the size of a small flame-thrower. “Hmm. So, you only found out about us relatively recently, hey?” he drawls, his face disappearing behind a pungent haze. “I appreciate the honesty.”

Although System formed in Los Angeles as long ago as 1995, that still makes them pretty much a new band in Classic Rock’s book. Since the release of their self-titled debut album in 1998 their career has been on a perpetual upward swing. For some years now they have been a staple of both the hard-core heavy metal and indie-oriented mags – not to mention related satellite TV channels. This summer they’re headlining the third day at the Download Festival at Donington Park (on June 12), above Slipknot and Slayer. To put that into further perspective, that’s on the same day Motörhead are the main attraction on Download’s delightfully named, and somewhat smaller, Snickers stage.

If you care about the future of heavy music, you should care about System Of A Down. When they first started out they toured with the likes of Limp Bizkit and were bracketed with the nu-metal brigade. But seasoned rock’n’roll observers identified a subtle subversion. When they dug deeper they discovered System actually combined the crunch of Slayer with the sedition of Rage Against The Machine. What’s more, they had an uncanny knack for killer hooks and melodies.

Even today, “I can’t think of a single band that sounds like us,” Malakian offers slyly, flicking at the brim of his floppy leather cowboy hat.

“We just came in from sharp edge of the LA scene and started doing our own thing,” says singer Tankian, who has just emerged from his own personal cloud of smoke on the other side of the room. With his curly black hair and stuck-on oblong beard, he looks like the star of a Young Frank Zappa cartoon. He adds: “System Of A Down is definitely schizophrenic – emotionally, musically, thematically. But it works for us.”

You also have an affinity for ingenious, left-of-centre pop songs.

“I guess in one way you could call our music progressive pop,” Tankian concedes. “Our strength is that all our tracks are songs, rather than scores or isolated pieces of music.”

With regard to his unconventional vocal style, Tankian states: “Sometimes I sing operatically, sometimes gutturally, sometimes normally. It’s just doing what comes naturally. The music is the stimulus, I just react to it.”

Malakian sums it up: “When I first started out, I wanted to write and play music that I couldn’t buy in any record store. That’s what System Of A Down is. It’s the band I want to hear. When we see some rival band going in our direction, we go off in a different one. If we see people latching on to what we’re doing, then we change.”

One thing that may have prevented you from checking out System Of A Down up until now is their political perspective. All of the band (completed by bassist Shavo Odadjian and drummer John Dolmayan) are of Armenian descent. In the early days, much was made of their efforts to persuade the US government to formally acknowledge the Ottoman Empire’s genocide of 1.5 million Armenians between 1915 and 1923 (each band member lost family during the period).

Tankian runs a non-profit organisation called Axis Of Justice with Audioslave (and former Rage Against The Machine) guitarist Tom Morello which, among other activities, stages benefit gigs to raise money for the homeless and for rape crisis/counselling centres. Tankian has also marched on demos protesting against the war in Iraq.

But as one System sceptic recently remarked to us: “They ain’t agit-prop Armenians, they’re college boys from Pasadena”.

For sure, it’s easy to pick holes in the band’s socially aware schtick. For example, Malakian – in-between generous drags on his hookah – spends the early part of our interview devouring a Big Mac; he confesses to having to consume one every day, otherwise he suffers withdrawal symptoms. That supersized habit doesn’t sit very comfortably with the McDonald’s-are-evil-global-overlords debate, which might have been a core System Of A Down cause.

Malakian also drives a Hummer, the giant American SUV that drinks petrol in gallons per mile rather than miles per gallon – not exactly ‘green’.

New single BYOB (Bring Your Own Bombs) may complain about presidents always sending the poor to war, “but the fact is that kings and queens, and rulers throughout history, have always sent their peasants off to battle while they themselves hide behind closed doors,” Malakian explains.

“What the song is really saying is: stand up for yourself for a change, stop watching TV and start thinking. We should be an advanced species, but we still drop bombs in this day and age. People want to believe in God, but then God comes along, wipes out 200,000 people with a tsunami and says: ‘Look, motherfuckers, I’ll kill you all if I want to’.”

So, are System Of A Down anti-religion? What do they think about all the agonising over the death of the Pope?

Malakian: “I respect the Pope. I’m not anti-religion. I’m just anti-stupidity. I’m anti-blind-eye. I’m anti-selfishness. I’m anti-I’m-just- going-to-go-to-work-today-and-I-don’t-give-a-fuck-about-what’s-going-on-in-the-world. I’m anti-programmed minds. I don’t write songs trying to be an activist; I write songs as a guilty party – as a person caught in the middle of all this shit.”

Tankian: “We’re not preaching, but that doesn’t mean we don’t believe in what we say… as long as we can afford to laugh at ourselves as well. If you don’t laugh at life, then you’re missing the whole point.”

Ah, yes – humour. Look beyond all the soap-boxing and you’ll find System have a dry wit and a predilection for the absurd. For example, they rhyme the words ‘gonorrhoea’ and ‘gorgonzola’ on one of Mezmerize’s choice cuts, the frankly bonkers This Cocaine Makes Me Feel Like I’m On This Song. Another track, Violent Pornography, contains the couplet: ‘It’s a non-stop disco/Bet it’s Nabisco’. While on Cigaro Tankian proclaims proudly: ‘My shit stinks much better than yours’.

“I like finding things that don’t have rational associations and then forcing a relationship between them. Like…” (Tankian takes an almighty toke and the room’s walls bulge inward in sympathy) “…the connection between those curtains over there and the shoes on your feet.”

Malakian has done the bulk of the song writing on Mezmerize, with Tankian taking something of a back seat this time around. In Old School Hollywood the former tells the tale of a celebrity baseball match in which he participated, and found himself on the same team as 50s dreamboat crooner Frankie Avalon.

“I was pushed into it; those events aren’t really my style. It was weird and surreal. Kind of nightmare-ish. But living, observing and writing about stuff is what I do. In a way, I do think the focus on our politics suffocates our humour. Usually when I write songs I don’t start with any preconceptions, I don’t think about what I’m writing about, and time passes quickly – sometimes a minute, sometimes an hour, sometimes a year. Then when I’m done, I’ll look at it and I’ll think: ‘What the fuck am I talking about? Why the fuck did I say that?’

Besides the excremental observations, the track Cigaro contains the boast: ‘My cock is bigger than yours’.

Malakian tap-taps his pipe agitatedly and looks trouserward at me: “I don’t know what size your cock is, and to be honest I’m not very interested in finding out. That’s an example of what I was talking about – of me only realising what the fuck I’d written after I’d finished it.”

“No, I’m very into that. A lot of that 80s hair stuff… shit, man, some of it was pretty good rock’n’roll. I see that song, Cigaro, as being based on ego.”

Jim Morrison of The Doors wrote a poem called Ode To My Cock.

“I’m a big fan of Jim’s. The Doors were a major influence on us in the early days. A lot of people focused on The Doors’ politics, but if you asked the band they’d say they weren’t very political. That strikes a chord with us. So yeah, Cigaro is about ego – although equally, it could be looked at it in a political way – like, we have bigger tanks than you so that gives us the right to invade your country. You’re the terrorists because we’ve got bigger tanks.”

But you drive a Hummer – that’s a big tank.

“You know, a Hummer can run on vegetable oil.”

New album Mezmerize is System’s long-awaited successor to 2001’s Toxicity (2002’s Steal This Album! was a stop-gap, fill-in release). Mezmerize is the first part of a double-CD that will be completed with the release of Hypnotize in six months’ time.

Malakian: “I know what you’re thinking: we’ve lost it, we’re done with, it’s all over for us. What can I say? It just felt right to do two records. We didn’t want the songs to sit around. People have waited a long time to hear a good amount of new stuff from us. The two albums flow together. The first one starts with a track called Soldier Side, and the second one ends with another song of the same name. That completes it. It’s kind of tough to explain until you hear it.”

Tankian, horizontal on a sofa, murmurs: “We did a big record and we decided to split it in two. For digestive purposes. No matter how much you enjoy a band, sometimes if it’s too long it wears you out. You don’t want music to do that. You need to feel at peace with yourself.”