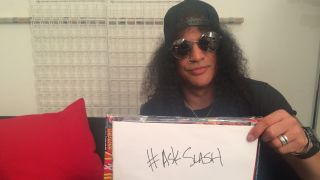 We had rock'n'roll legend Slash popping into the office so asked you guys to send in your questions using #AskSlash! Some were serious, some were funny and some were... just a bit weird. Here's what went down!

Nebzeh: What are your favourite songs from genres outside of metal?

“How far outside metal? Albert King or Raspberries songs? You know, one of my favourite fuckin’ songs is Baker Street by Gerry Rafferty… and that’s definitely not heavy metal!”

RossLeahy: What is the one essential you can’t go on the tour without?

“A guitar! Air guitar doesn’t really work. A guitar is the main thing, outside of that maybe my top hat. It’s not essential though. Really that’s it, I don’t need much!”

Daniel Moore: What are your best memories from your time in Guns N’ Roses?

“Probably from 1984 up until 1990, that was really the golden era of Guns N’ Roses and when it made total fuckin’ sense.”

Crawford Lynn: If there was only one food item left in the world, what would you want it to be?

“Probably some kind of tandoori - maybe chicken tandoori or shish kebab, something like that. I’m not a big foodie, I have things that I like and they’re all pretty simple, to be honest.”

Dannii: How do you get your hair to look the way it does? What’s your secret?

“I just get out of the shower and don’t do anything. I wish there was something I could do with it haha!”

Sanderson : Can you give us a hint as to your support acts on your UK tour?

“Um, well I know we’re gonna go out with Glenn Hughes’ new band California Breed with Jason Bonham and their new guitar guy – who is really cool – on the UK side of things. I feel pretty comfortable saying that, I think it’s been worked out!”

David Cantu: You’re pretty much everywhere with so many music projects. Will you ever stay with one band or just keep branching out?

“I tend to only do one thing. Like when I was in Velvet Revolver and it was working, that was my main thing. I always have one solid thing going on. But I like to jam around - that’s something I’ll never stop doing. It really helps stop me from getting stuck in a rut as a player and just having what my band does and being resigned to only that. It allows me to play with people who do different things and discover new styles, shit that basically I normally wouldn’t do. It’s very humbling and you learn that you’re not the only fuckin’ guy in the room. You have to work with people that are better than you or bigger than you, and adapt to their situation.”

Brian Loughlin: How often do you say “I’m going for a slash”?

“I never do. My dad picked on me about that for a while! I think it’d just be drawing way too much attention to myself going to the bathroom to ever say that haha.”

Jack Blair: What’s the best guitar you’ve ever owned and why?

“Well, the Derrig guitar is obviously the best guitar… maybe just because I’ve had a personal relationship with it for so long. But I’ve used it so much, it’s my go-to guitar, I feel comfortable with it. Even though now it’s becoming very vintage, it’s starting to fall apart and we have to fix and tweak things, replacing little bits and pieces. It’s very temperamental… it’s like a marriage, you have to treat it a certain way for it to work a certain way!”

Gerald Jacobs: Have you ever thought about recording with Jerry Cantrell?

“I haven’t really thought about recording with Jerry, but I’ve jammed with him a bunch of times. We’ve done a lot of little impromptu appearances together. But to record with Jerry for the sake of it… he’s got his own special way that he does records and he drives that very diligently in terms of how he records. Getting together with guitar players for the sake of bouncing ideas has never been my thing. I like singers and then I do all the guitars. But I’m a lot less fascinated with guitar albums and guitar this and that… I prefer the context of a song. And for me, I love playing but all the other visions people have for boundless guitars and interacting doesn’t really excite me in the same way. All that considered, if me and Jerry wrote something together and recorded that would be awesome!”

Martin Winchester: Have you and Slasher films got anything else in production? I loved Nothing Left To Fear and would love to see something else from you.

“I’m working on a new one now. It’s called Cut Throat Scenario and I’m producing that, we’re just starting to cast it. The director wrote it, so we have that done, now it’s just a case of raising the money to make it! It’s nothing like Nothing Left To Fear though.”

Alexander Mak: I have heard you collect pinball machines. What machine is your all-time favourite?

“I think my favourite pinball machine is Funhouse, which is this great machine with a clown head at the back of it whose mouth opens and closes where you shoot the ball! When your ball moves to the right, the eyes move so it’s really creepy. The clown’s name is Rudy and it talks! That’s probably my all-time favourite but I’m not what you’d call a big collector. I don’t collect tons and tons of machines for the sake of collecting them for their pedigree or whatever. I have subject matter that I really dig, but mainly it has to be a really good player, I really have to like the game and graphics. It’s rare for me to buy one, I only have about 10 or 11 pinball machines and I’m not even that great a player! I come home after being gone for six months or whatever and I’ll play like three times. I’ll have that one game where I get the highest score and then maybe not play for another year!”

Rob Fraser: Who is your favourite actor?

“I have a couple… I love Jack Nicholson, he’s my go-to favourite actor of all time. But I also love De Niro and Gary Oldman too, and Christian Bale who played Batman - he’s a very dedicated method actor.”

“Do I hate Justin Bieber? I don’t hate anybody… all things considered. There’s a thing going around where I talk about a band called One Direction, it’s online all the time and I keep having to take it off my Instagram cos I didn’t say it. There’s like two paragraphs about what’s wrong with these guys… I don’t give a shit! I don’t care about One Direction, I hadn’t even heard of them at that point. Although I did finally see them on Saturday Night Live and I get why people might not like them. But all things considered, I don’t care what Justin Bieber does or anyone else I’m not necessarily a fan of. I don’t have time to be worrying about what they’re doing.”

Leah Higgins: What is it like knowing that most people in the world know who you are?

“I’m not gonna sit here and go, ‘Wherever I go, everyone knows who I am’. I’m a guitar player; I’m not a celebrity like George Clooney or something. I love the fact that as a musician I can go somewhere and play and people know who I am, because that means I have an audience wherever I may end up. But I don’t think about the other side of it, and I don’t really know if that’s true!”

James Captain Beard Hopkins: Who would in a fight – Superman or Chuck Norris?

Becky Elford: If you could bring back any deceased musician, who would it be and why?

“I wouldn’t bring back any deceased musicians haha! I don’t think I have the right to be able to do that. But that said, I think John Bonham would be the one ‘cause I never got to see Zeppelin. He’s probably one of my all-time favourite deceased musicians. I got to see Jimmy play with P Diddy one time, but I never saw Page & Plant or any other carnation. I just wanna see Zeppelin!”

Peter Warner: Who is the most underrated guitarist in hard rock today?

“I think Tom Morello. It’s funny ‘cause we all know he’s one of the most inventive, most interesting and most innovative guitarists around, but no-one seems to pay enough attention to him. He’s phenomenal, I know the guy and have played with him… he’s so talented and creative. I think Rage could be my all-time favourite live band.”

Dirk Paton: What guitars does he like to play other than Les Pauls?

“On this last record, I took these ES-175 and ES-135 Gibsons and used them for a lot of rhythm guitars on one side of the speakers. They sounded amazing! I’d never played ‘em before. I stumbled on one, then Gibson sent me one to check out and I used it primarily for the parts Frankie will be playing on tour. Those two guitars are unreal. I also have Les Paul Junior that I use and an Explorer. I don’t like to pull out Strats anymore, I found I’d rather make a Les Paul sound like a Strat than a Strat which just sounds like a Strat.”

**Classic Rock magazine will release World On Fire, the new album from Slash with Myles Kennedy & The Conspirators, as a special Fanpack edition on September 15, a full four weeks ahead of the album’s regular release date. **

If you pre-order via www.myfavouritemagazines.co.uk/slash before 12pm (GMT) on Monday 11 August you will receive an exclusive personalised giant poster featuring your name.