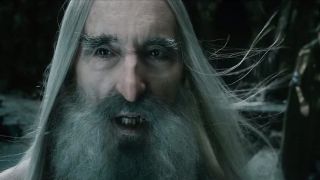 It begins with a history lesson, his voice a melodious rumble that bears all the fruit of a near century of experience, his words emerging at the pace of someone who thinks before he speaks and with the consideration of someone who knows what he’s talking about. At the moment we’re talking about the historic origins of Christmas – as you do when you have a knighted actor on the line who just happens to have recorded a festive heavy metal single. In truth, though, when conversing with a man of Sir Christopher Lee’s stature, you don’t really do much talking at all. If you’ve any notion of the life he’s had, all 92 years of it, you listen.

“Jesus Christ, well, he wouldn’t have been called that at all,” he says. “In Greek, Christos means, ‘the anointed one,’ so it would have been the Christ. As for the day? Well… it’s more to do with ancient feasts like Beltane,” he pauses, then smiles. “Christmas should be a source of joy and happiness for everyone.”

And that’s what brings us to this moment. Sir Christopher Lee’s brand new single, Darkest Carols Angels Sing, the follow-up to last year’s Jingle Hells, has just been announced. And why not discuss Christmas? By now, the heavy metal bit should surprise to no one. It was back in 2010 when Metal Hammer first crossed paths with the man who was Scaramanga opposite Roger Moore’s Bond and whose Lord Summerisle will forever be etched into the minds of all who’ve known The Wicker Man’s twisted delights. News had reached us that the one-time WWII RAF intelligence officer with mysterious ties to the SAS had just emerged from the studio, at the age of 88, with a heavy metal concept record based on the life and times of Charlemagne and was happy to tell us why. It’s impossible to forget the moment that our interviewer – Black Sabbath’s Tony Iommi, as it happens – asked what it was about heavy metal that Sir Christopher found so appealing. He paused for a moment, his eyes then widening and, with a slowly clenching upturned fist, simply said, “The power.”

“I think I was in a car,” he says of his first-ever encounter with the riffy stuff. “I wasn’t driving, but it was playing and I thought, ‘Well, this is certainly something new.’ It appealed to me because it’s different,” he says. The appeal was strong enough to result in collaborations with both Rhapsody Of Fire and then Manowar, but it was really the release of Charlemagne: By The Sword And The Cross in 2010 that confirmed his commitment to the cause.

“I have a great belief that things – no matter what they are: music, literature, anything in life – should from time to time surprise people and that’s what I believe in: surprising people. Heavy metal has, since its very beginning, surprised in the best sense of the word, and people all over the world. To be involved in that, and to show people that even now I can still surprise my audience, it’s very important. I’ve spent my entire career taking risks. Acting is a risk, it has to be. I’ve never been afraid, and I’ve done my best to take those risks.”

He’ll relate how over the course of his career – which includes more than 200 films (and that’s a sentence worth re-reading once or twice) – it isn’t the mere act of entertaining but the far more challenging one of staying entertained that’s important. You do get the distinct sense that, particularly where his storied years working with Hammer Films is concerned, there was no small amount of fun involved, either.

“I’ve been doing this on and off for about 68 years – I still want to entertain people,” he says, imploringly. “I want to surprise them, and I want them to enjoy what I do. You see too much these days that’s totally conventional, in acting and presentation of character. It’s always been important to me, always – even when I started, and that’s a long time ago. I wanted to find the right areas in which to make my name, but above all you have to remember you are an entertainer.”

As Sir Christopher sees it, it’s that moth-to-flame allure of left-turns and colouring outside the lines that’s kept him so motivated as an actor, but it’s far more than a mere career approach. In his view, it’s a way of living and much of that wisdom came from on the set.

“I remember doing The Private Life Of Sherlock Holmes with Billy Wilder,” he says, referring to his 1970 role opposite Sir Robert Stephens’ Sherlock. “I played Mycroft, and Billy said, ‘I want you to be completely 100% different from what you’ve done before, from what you might be known for, I want you to be unrecognisable – with a bald patch, and so on,’ and that was the beginning of the major change. Billy said, ‘I don’t want to see you on the camera, or to be too familiar.’ That again applies to music, not to be familiar. People would not think of me automatically as a heavy metal singer, but now I’ve done every variety of singing, from opera to country to heavy metal, and the audience seems to like it!”

And, as he reveals, it’s the appeal of doing things differently that’s guided all of his roles – including Saruman, a role he’s clearly been delighted to revisit but in a new way.

“In The Lord Of The Rings I was Saruman the Evil. In The Hobbit I’m not, because it goes back 70 or 80 years and he’s very wise and noble, with great dignity and decency. He’s the same character but completely different. It’s never explained, really – I think it’s possible that he was turned somehow…”

As to the experience of working on the Peter Jackson epics and bringing life to such an enigmatic character, it’s clear that it wasn’t just the role, but the relish of entering the world of J.R.R. Tolkien, whose work he’s so long admired.

“It was such an amazing experience for me to work on The Lord Of The Rings,” he says. “Other authors and dramatists, Lewis Carroll for instance, who wrote Jabberwocky, invented words, but Tolkien was unique because he invented a new language – that’s phenomenal. That’s genius. No one in history has quite done it like that and ever will again.”

And, on the face of it, the very same thing could be said of the life of Sir Christopher Lee. So then, can we expect another heavy metal record?

Darkest Carols Angels Sing is out now. Download it now from iTunes.

The Hobbit: The Battle Of Five Armies is now in theatres. To learn more about the life and times of Sir Christopher Lee, see his autobiography Lord Of Misrule.