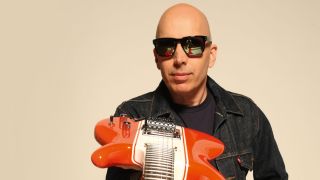 There’s a theory that playing guitar makes a guy more attractive to the ladies. Agree?

Yeah, I would say so. It’s important, however, to play the right guitar. And then, of course, it’s where you wear it. You know there’s that thing about the low-slung guitar? I definitely don’t know many guitarists that achieve that level of attraction when they’re wearing the guitar really high.

Has a fan ever told you they’ve used your music in the bedroom?

Yeah. Three months after [1987 album] Surfing With The Alien came out, I was on tour, and that was the first time I started to see the fans. And they started telling me these things, like, “I love having sex to Rubina.” But the funniest – and most often-repeated – thing was how many strippers were using Hordes Of Locusts to strip to. By about the tenth time, I was thinking, “What have I written here?”

Oh, those were absolutely crazy. There was basically no rule to govern any kind of behaviour, so drugs, sex and rock’n’roll were just everywhere. People would dress like a cross between burlesque and a horror show. There was always a lot of sex going on everywhere – sometimes right on stage while we were playing. Y’know, sometimes, depending on your viewing angle, it could be nice to look at. Other times, it could be off-putting, because although they’re having a good time, you’re not really attracted to the way they look!

What’s your song Borg Sex about?

I was thinking about Star Trek and the character of the Borg. The show had started attempting to make the Borgs sexy, and I thought: “Well, they’re just trying to spike up their TV ratings.” But I had a silly daydream, and I thought, well, if there’s a distinction between male and female Borgs, then how would they engage in sex and foreplay? So I came up with this funny improvisation and sent it off to my co-producer with a little paragraph saying: “Imagine Borgs having foreplay and sex: what would it sound like?” Then I plugged in the guitar and tried to start a sexual conversation with really high pitches and low pitches and different scales. So, yeah, it really was about Borg sex!

The first time I saw Led Zeppelin, I was thinking, “These guys look really dangerous.” Until then, I’d been looking at album covers of British Invasion stuff and I always thought everyone looked pretty funny all dressed up. Then suddenly there was Zeppelin and Sabbath: they looked so cool, dirty and dangerous. Together with Hendrix. Hendrix just moved that way, y’know? His show, he looked like he was trying to attract that kind of action. Whereas Page didn’t. Page was all about cool. Hendrix was all about sexuality.

If you had to rank sex, drugs and rock’n’roll, which order would you put them in?

I think you said it right. There it is.