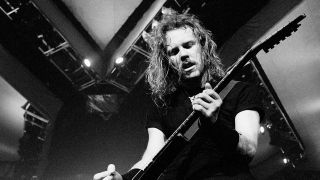 By the start of the 1990s, Metallica had recognised that the epic sprawl they had perfected was unsustainable, while drummer Lars Ulrich’s finely tuned cultural antennae had clocked that a change was in the air. Their response was a stroke of genius: strip away all the fat, without losing the things that made Metallica so unique.

With producer Bob Rock (whose previous credits included The Cult’s Sonic Temple and Mötley Crüe’s Dr. Feelgood), brought in as producer – a controversial move at the time, but in retrospect an inspired one – they delivered an album that redefined rock and metal for the coming decade.

Here’s 20 things about the album you might not know.

1. The band were ready to get rid of Bob Rock

Between his poodle-rock CV and his early pronouncement that Metallica’s records didn’t match their shows (Ulrich: “We’re like: ‘Excuse me, who the fuck are you?’”), the band were wary of their new producer – and kept former collaborator Flemming Rasmussen on standby.

Late in the sessions, Hetfield drafted a lyric based on the premise of “baby suddenly dies, the sandman killed it” (with the line ‘Disrupt the perfect family’ where the familiar ‘Off to never-never land’ is now). But with management eyeing Enter Sandman as the lead single, Rock had a quiet word…

3. Holier Than Thou might have been the first single

Twenty-seven years later, the band still rag Rock for championing the galloping third track as radio gold. He told MusicRadar. “Every time I see the band, they always say the same thing: ‘Holier Than Thou, huh?’ They’ll never let me live it down.”

By1991, Hetfield had the furball bark down pat, but Nothing Else Matters required a different approach. “He said: ‘Bob, I’ve never really sang before, I’ve just kind of yelled,” Rock recalled. “He played me a Chris Isaak record and he said: ‘On Nothing Else Matters and The Unforgiven, I want to sing. How do you sing like this?’ I said: ‘What you hear in Chris Isaak’s voice is the nuances when he sings – he isn’t doubled. He’s actually performing. You perform.’”

5. The Bullying went both ways

6. Cliff Burton would have pushed them further

Asked in 2016 what Metallica’s late bassist would have made of the band’s mid-period direction, Hetfield said: “Well, I certainly would have thought there would have been some resistance, for sure. I think the Black Album was a great album… [but] I think Cliff would have probably interjected some different stuff, getting his bass heard and some more musically challenging things, probably.”

7. Hetfield was bricking himself at the premiere

With 19,000 tickets given away free by their US label Elektra, the Black Album’s grand unveiling at Madison Square Garden on August 3, 1991 was the mother of all listening parties. But for Hetfield, watching from the wings, the record’s more divisive moments made for an anxious night: “I was just waiting for Nothing Else Matters to come on. Y’know, to see if these people just look at each other and throw up.”

8. Even the packaging was consciously “anti-metal”

If the new material stepped away from …And Justice For All, then the Black Album’s minimalist sleeve was conceived by Ulrich to kick against the iconography of the late-80s metal scene. “All these cartoon characters and all this steel and blood and guts,” he said. “It was like:, ‘Let’s get as far away as possible from this.’”

9. There’s more to that sleeve than meets the eye

Don’t Tread On Me isn’t just the Black Album’s most political moment, it was also the motto of the Culpeper Minutemen. The militia group fought for the patriots in the American Revolution of 1765-1783, and their flag features a coiled rattlesnake bearing a striking similarity to the serpent on Metallica’s sleeve art.

Asked in 2012 which song he’d scratch from the Black Alb um tracklisting, Ulrich sniped at the “shuffle vibe” of Don’t Tread On Me. In an interview with Playboy, Hetfield offered three duds: “There are some songs on there I don’t like. Through The Never was a little wacky. Don’t Tread On Me, probably not one of my favourite songs musically. Holier Than Thou was one of the sillier songs, more the old style of writing.”

11. …While Rock wasn’t convinced by Of Wolf And Man

I’ll be honest,” the producer told MusicRadar. “At firs t I thought it was silly to write about a wolf. I was like: ‘Great, a song about a wolf. What are you fucking getting at? May as well write about pyramids or something’. When metal goes in these kinds of areas, I lose the plot. Then, as we got more into James’s lyrics, I realised that the song wasn’t silly.”

The Diamond Head leader – and thrashscene talisman – stayed at Ulrich’s home in 1990 and was left nonplussed by early sketches of the material. “He played me some demos of the songs, Sad But True and so on,” he told Joel McIver. “At the time, it was just James singing ‘wah-wah-wah’ on each track, just drums and guitar. And I was wondering how this was going to sell.”

When the associated Wherever We May Roam tour reached the Orlando Arena on March 16, 1992, fans dangled an usher from the balcony by his ankles, during a rampage that resulted in Metallica being billed for $38,000. #

14. There was no big album wrap party

The Black Album was remixed three times and only narrowly hit its pressing deadline. The frazzled group toasted its completion at a local bar, in an exhausted silence – after which Ulrich and Rock didn’t speak to each other again for a year.

15. Bob Rock took the most flak

Despite the Black Album’s commercial slam-dunk, Rock was vilified for meddling with the band’s early sound, culminating in a fan petition that urged Metallica to cut their ties with him. “Bob Rock was a huge target,” Hetfield pointed out. “Everyone blamed him. He got some horrible death threats and shit from fans.”

16. Hammett was scared of Nothing Else Matters

The lead guitarist didn’t play on the track, and admitted in a Village Voice interview that he held off tackling it live: “We kept putting it in the set and taking it out, until we were certain we were actually able to play it. I had to relearn that whole intro part to play by myself on stage, which was a little bit intimidating for me at that point.”

He might have questioned the origins of Enter Sandman, but in 2011, the waspish Megadeth man admitted a soft spot for The Unforgiven. “I liked it because I thought this was really the first time I’ve ever really heard James sing,” he told Revolver. “He had sung before, and he was a great singer. But that was the first time I ever heard him really, really sing.”

18. It was on the playlist at Guantanamo Bay

In 2008, leaked documents revealed that Enter Sandman had been used by the US military to “induce sleep deprivation, prolong capture shock, disorient detainees during interrogations and drown out screams”. Ulrich felt the interrogators had missed a trick: “I can name, y’know, thirty Norwegian death metal bands that would make Metallica sound like Simon And Garfunkel.”

19. It took down the country queen

In 2009, the Black Album dethroned Shania Twain’s Come On Over as the bestselling CD since the introduction of the SoundScan sales tracking system. It hasn’t budged since.

20. Five thousand people have bought it this week

The Black Album has sold more than 16 million copies, and shifted 267,500 units in 2016 alone. But it’s the fact that the record still sells 5,000 copies a week in the US that makes Ulrich gape. “I think you file that one under ‘mindfuck’,” he says.

Metallica: the epic story behind the Black album