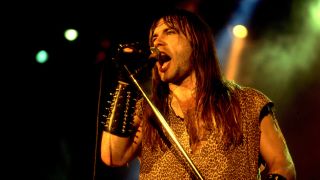 On September 26, 1981, Iron Maiden made arguably the most important line-up switch they would ever undertake. Bruce Dickinson was brought in to replace Paul Di'Anno on vocals – fronting the biggest band to come out of the whole NWOBHM explosion. And it didn't get a universally positive response at the time.

Now, I had been told the Samson tyro was coming into the Maiden fold a couple of weeks earlier. I was at Saxon’s management offices in West London, and they had heard that Di’Anno was out and the bloke from Samson was in. Amusingly, there had been some confusion, because word had leaked that it was the Saxon singer, namely Biff, who was defecting to Maiden. The similarities in the two bands’ names had caused the misdirection. Samson. Saxon.

So, the Saxon team were anxious to repair the damage, and emphasise that Biff was staying put. It was Bruce who was moving, but this was very much under the radar. All very secret squirrel. Nothing had been made official at the time and this was all off the record. The last thing Saxon wanted was for anyone to know they were telling people what Iron Maiden were up to.

But, Bruce Bruce? Was he really what Maiden needed? Di’Anno had been such a crucial part of the band’s ongoing success up to that point. His voice had helped to define their two albums so far, Iron Maiden and Killers, and his departure was gonna be something of a blow to the band, surely?

But then I began to think about how things between the frontman and Maiden had begun to deteriorate. When they headlined Hammersmith Odeon earlier that year, their first time in that position at the revered venue, he hadn’t been able to cut it. Di’Anno looked and sounded out of his depth. He wasn’t comfortable on the bigger stage. Besides, the reaction to Killers had been mixed, and a lot of reviews suggested it hadn’t taken the band on from the quality of the debut. Personally, I thought (and still think) it was an excellent record, and better than the first one. To this day, it remains my favourite Maiden album. However, the consensus was that unless something drastic was done, Maiden would stutter, stall and crash. It was a massive crossroads in their young career.

In addition, Di’Anno was becoming increasingly unreliable. He was already missing gigs due to embracing the rock ‘n’ roll lifestyle.

So, he had to go, and his sacking was no surprise. Although interestingly, more than a decade later I was shown a handwritten letter from the singer, in which he said he was leaving, because he had personal issues to deal with which were affecting his commitment to Maiden. He admitted to being unfair to the band, and felt it was in everyone’s interest that he should step down. Now, whether Maiden allowed him to look like he’d left of his own free will rather than being fired is really irrelevant. The fact is that he was gone.

Bruce had done a decent job in Samson, and he clearly had a good voice. But was he really the bloke to take over? There hadn’t been anything in his brief role with Samson that made him seem like the man for the task. I’d seen him on a big stage the previous year, when Samson opened for Rainbow and he didn’t strike me as a major figure in the making. I actually thought that Jess Cox of the Tygers Of Pan Tang or Reuben Archer from Lautrec would have been more convincing choices.

I wasn’t alone in my scepticism. A lot of Maiden fans decried the loss of Di’Anno, and believed the band were heading for disaster.

Still, at least the new boy was to be known as Bruce Dickinson, his real name, not that daft Bruce Bruce stage one he’d used in Samson. That was a step in the right direction. But the moment of truth came when the band played at the Rainbow on November 15th in London. Their home town, facing an audience of diehards who had to be won over. You felt rather sorry for Dickinson. The fans’ attitude was ‘Go on, impress us!’, and he was singing what essentially a Di’Anno setlist, and hardly had the time to put his stamp on the band. No pressure then.

However, there were a couple of new gems on the night. Maiden introduced 22 Acacia Avenue and Children Of The Damned, and these nascent versions gave Bruce Dickinson a chance to air his talents, and he seemed to grow visibly. Of course, the shadow of his predecessor loomed large for much of the night, but there were clear signs that he could take Maiden up a notch or two.

Afterwards, the naysayers who had been so vocal beforehand, were rather muted. Dickinson hadn’t won them over, but had done enough to persuade people to give him a chance. A score draw. The consensus was that he should be given an opportunity to see what he could do in the studio for the new Maiden album. And we all know now how that went.

I will say this: my favourite Maiden albums have always been the first two, but, I also readily accept that, had Di’Anno stayed, then Maiden would have probably gone up in smoke. The move to recruit Dickinson was inspired, and perhaps the best decision Maiden ever made. But I still also muse over what might have happened had Cox or Archer been brought in… nah, let’s not even go into these alternative universes.

Dickinson’s arrival 35 years ago kick-started a spell of dominance that still goes on to this day. And, realistically, what has Di’Anno done ever since? Maiden were headed to the top one way or another.