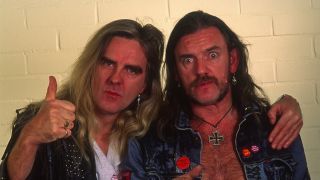 The Saxon frontman mourns the demise of “the Mad max of rock’n’roll”.

From then onwards, Lemmy became Saxon’s unofficial mentor. He impressed upon us the importance of never letting your fans down. Refusing to sign an autograph was unforgiveable.

Lemmy was a really great guy. Yes, of course he was a hellraiser, but there was also quite a gentle side to him. He could empty the dressing room with a simple look, but he was incredibly popular right around the world.

Saxon supported Motörhead on their last tour of North America, and he hated cancelling or aborting shows. It tore him up inside. When he was unable to finish a show, he would go back out and apologise from the stage. It was brave of him to explain why he couldn’t carry on.

Okay, on some nights it was a bit loose by their standards, but by the last four or five shows we did together in Europe they were really cooking. He always said that Motörhead play better when Saxon go on before them. He was very proud of our band as well as his own, and there was a lovely friendly rivalry between us.

In 2008 both bands did a festival in Germany, Wacken Rocks Seaside, and there were adjoining dressing rooms. As I was talking to a journalist, I could see Lemmy peering through the crack in the door. When it was over he came in and demanded: “Have you got a bigger sofa than us?” I told him to fuck off, obviously. But that was Lemmy; as everyone knows he was very funny bloke.

Being out on the road with him and Motörhead was quite an experience. How he would stay up so late, drinking and doing whatever, and continue to perform at such a high level was something to behold.

On many nights we would sit up late talking on the tour bus. Like him, I’m a bit of an amateur historian. He was a very intelligent man. His lyrics, like his bass playing, were extremely underrated.

I know he was very proud that Motörhead’s final tour of America broke them in that country – that’s something he had been trying to do for years. Now that they’ve gone, people are going to miss Motörhead. On their last tour they appeared at big festivals and headlined huge shows. They were a great live band, the loudest band in the world. And don’t forget, Phil Campbell almost died while out on the road. They were definitely a band of hellraisers.

On December 19, Lemmy sent me a text message saying that he thought Saxon had been fantastic on the tour we’d just done together, and asking me to say hi to the boys, and it meant a lot. That’s the last thing that I heard from him.

I believe that he wanted to kick the bucket on the road, but he won’t have been too disappointed by the way things panned out. Playing a fucking videogame, he died as he lived. It was quick, at least.

The bottom line is that Lemmy Kilmister was a good man. He was the ultimate road warrior, the Mad Max of rock’n’roll. With Lemmy what you saw was what you got – he always wore the same clothes, you could rely on his playing, and his music never let you down. RIP, old mate.

Lemmy was not one for spending a great deal of time in the studio, and when we were making the Another Perfect Day album at Olympic he would head off to the Embassy Club to play the fruit machines at the first opportunity. He rarely came to the studios with cash, and would regularly ask to borrow 20 quid off anyone in the studios but rarely pay it back.

His attitude to money can be illustrated by a story related to slot machines. He had apparently bounced a cheque at the Embassy Club, and a week later won the jackpot on the slot machine. The jackpot was not paid directly from the machine, but by the manager, who took it upon himself to deduct the value of the bounced cheque from Lemmy’s winnings. Lemmy was incensed. He felt that the manager should have paid him the whole amount and then asked for the money owed, however unlikely that scenario was.

He wasn’t tight, but he did have a particular view on how life worked.

We heard that Lemmy had heard our single and liked it. He came down to a rehearsal and we clicked straight away. Motörhead asked us to support them on their first major British tour – Overkill. He certainly championed women. He really stood up for Girlschool and said: “Look, if the girls can do it, they’re in there. And they’re as good as guys.” Not many people were saying that at that time.

I also do astrology, and I wrote an article about Lemmy’s chart. He was a Capricorn; they’re usually ambitious, hardworking and disciplined. And his Virgo side reflects attention to detail, very modest. So not the usual signs for a rock star. He told me how he started taking speed originally so he could stay up and work longer. And he knew his astrology too. He was very intelligent and interested in everything.

I think my lasting memory of him will be the first time I saw Motörhead on stage. I just stood there with my jaw hanging down. It was like thunder. Lemmy’s playing was so unique.