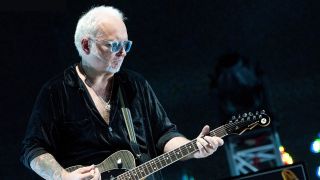 Reeves Gabrels is celebrated as one of the most daring and forward-thinking guitarists of his generation.

In addition to his current, high-profile gig as lead axeman for the Cure or his work with his own band, Reeves Gabrels & His Imaginary Fr13nds, Gabrels’ resumes includes notable collaborations with the late David Bowie, both as a member of the band Tin Machine as well as notable contributions to three of the singer’s mid-to-late ‘90s albums, Outside, Earthling and ‘Hours…’.

But in arriving at his selections for “the 10 records that changed his life,” the iconoclastic guitarist decided to separate the musician in him and instead focused on discs that, in his words, “had a larger impact on me.” “This presents a whole new world of possibilities,” Gabrels notes, “but there is a downside in that, with one possible exception, my choices are pretty much from the first 15 years or so of my life. That’s when music starts to form your thinking and it becomes part of your worldview.”

Gabrels recalls always being surrounded by music as a kid. His father was a fan of the New York country station WJRZ, while his mother listened to the pop-oriented WABC. “My mom collected anything that was pop music, from the time when she was a Bobby Soxer,” Gabrels says. “So that went from the Platters, the Coasters and the Dorsey Brothers and right on through to the Beatles. She was the first person who played the Beatles for me. I remember sitting in the car with her when Love Me Do came on. She turned the radio up and explained to me where the Beatles came from, told me about their haircuts. It was pretty magical.”

Surveying his selections, Gabrels points out how they all share a common trait, a particular transportive quality that he says is unlike other art forms. “If you’re looking at a painting or some other kind of visual piece, it’s a different kind of experience,” he says. “You can be staring at a famous painting in a museum, but you’re catching the frame, the walls, or you’re noticing other people walking around in your peripheral vision. With music, you seem to take it all in and it becomes immersive. Music has a power all its own.”

Below, Gabrels runs down his picks for the 10 records that changed his life.

“This is the first single I ever bought. They used to play it going into the news on WABC and WMCA in New York. They could always fade in an instrumental, so this song worked well.

“That groove was so cool, and I just loved the sound of the organ. There was a real sense of place to this song – you could hear the room that the guys were in. With Tin Machine, I really went after that. I had the room miked in a way that the sound of the environment came through.”

“Terrifying. Most of the guys in the band were tenors, but Levi Stubbs was a high baritone, and he just dominated the sound in a special way. If you go back and listen to their songs, you can hear the mic distorting because he was hitting the limiter. Whatever they did when they were setting levels with his voice, it went out the window – he must have been holding back.

“Such a powerful and believable performance, and especially to somebody so young, as I was when this came out. It was eye-opening. What did I know about such angst? It made me feel kind of… tingly.”

“I picked this in spite of having met and hung around the Gallagher brothers, finding Liam passed out in front of the urinals of the BBC when we were doing Jools Holland or listening to Noel talk about himself at the after-show at Wembley. In spite of my intellectual dislike for their attitudes, I really love this song.

“In fact, you could play this song at my funeral. Lyrically and vibe-wise, it resonates with me. It draws me in and holds me, and it has that sense of place that I talked about with Soul Limbo. Hey – nobody ever said you have to like the guys who make the music; otherwise, we’d never like anything done by Ike Turner.”

“Talk about being in the room. You listen to this song and you’re in Pye Studios in London. And you can picture the recording, too – I’m guessing it was cut live with the band and orchestra. It’s truly magical.

“I’m doubling up on this one. Tom Jones’ version of Thunderball’ does that same thing to me. It’s that sense of time and place. At this age, I had just discovered The Man from U.N.C.L.E. TV show, and I was seeing London every week. It felt like this place that I wanted to go to, and Thunderball brings me there. It’s transportive.”

“This was on Jack’s Songs for a Tailor album. This one felt pastoral to me. It had all the things on it that we like about Nick Drake, but it also had the Jack Bruce advanced harmony.

“I remember the first time heard it, on WPLJ in New York – that was the big FM station. I was living on Staten Island when the first moonwalk happened, and I remember sitting on the back stoop of the house when the song came on. I looked up at the moon, and I just thought, ‘Wow, there’s guys walking around up there.’”

“It came from the Tumbleweed Connection album, which had Burn Down the Mission and some other great songs. This one brings me right back to my first high school girlfriend, in the summertime – not in the corn fields but in the hay fields.

“Now the thing about tall hay is, you could walk into it and no one could see you – unless a plane flew over you, which it never did. The lyrics make me think of that line ‘There’s nothing like a pair of bib overalls on a girl – ‘cause there’s only two snaps.’ It’s a pretty tangibly sexual song – ‘The fruit juice flowing slowly, slowly, slowly/ down the bronze of your body.’ That’s pretty bold stuff.”

“This appealed to me on so many levels. There’s a section in the song where it sits on the C major – the root pedals and the chord slides to B flat – and it just sounds so great. Plus, there’s that great recurring part – “Da-da da-da da-da…” Try to get that out of your head. People have stolen that bit for years.

“Look at the whole Jimmy Webb catalog and you’ll find a lot of the same harmonic devices. As a pre-teen, I didn’t know shit about what that meant, but I did know that certain things made me feel a particular way. It’s there in Up, Up and Away, another great Webb song. That’s what made him such a talent.

“I remember seeing Glen Campbell on TV back then. He was such a star. A song like Witchita Lineman was common ground between me and my dad. There’s other cool versions of the song out there. A band I played with called Rubber Rodeo used to do it. That’s the mark of a great song – anybody can do it.”

“A lot of people have done this song. Sergio Mendes did it, Stan Getz did it – there’s been a few great versions. I remember my mom belonged to the Columbia Record Club, and if you didn’t tell them what you wanted every month, they would just send you the number one record. They sent this record. My mom wanted to send it back, but I liked it.”

“The stream of consciousness lyrics are fascinating. They’re kind of like a nursery rhythm you can play for kids, but I imagine an 80-year-old man might cry when he hears them. The Sergio Mendes version really affected me because of the female unison vocals.”

“This is off Hot Buttered Soul. Isaac stretches it out to 12 minutes, and it’s completely magical. I knew the song, of course, from Dionne Warwick’s big hit version of it, but when I heard Isaac Hayes do it, I learned something without learning it – that you can re-arrange the fuck out of a song.

“I first heard it while riding in a Volvo with a friend of my parents. At night. In a snowstorm. The guy had these big stereo speakers in the back, and he stuck me there so that my head was right between them. It was kind of surreal. Then he played me Careful With That Axe, Eugene, by Pink Floyd. Talk about two extremes.”

“If you listen to the latest Queens of the Stone Age album, they cop the ‘shoo-bop, shoo-bop’ thing in a song. I thought that was pretty remarkable.

“This song came from a Busby Berkeley film [Dames, 1934], so it hung around for a long while. It’s such a beautiful, soothing track. Any time I hear it, I just have to sit there and let it take me away.”