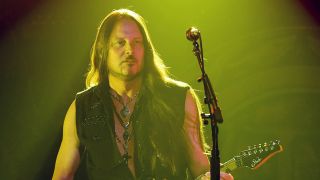 “I’m very picky when it comes to guitarists,” says Reb Beach, whose own axe skills are so prodigious that he divides his time between two bands – Whitesnake and Winger. “I like guys who phrase well and have good tone, but most of all, I want to hear personality. I like hearing a song and immediately saying, ‘Oh, that’s so-and-so!’”

More than anything, though, Beach insists that six-string virtuosity is meaningless unless it’s in service to strong material. “I’m a songwriter, so I need to hear a guitarist playing a great song,” he says. “From the moment I wake up, I’ve always got a song in my head. No matter how cool somebody’s guitar playing might be, if it’s part of a crappy song, it bothers me. I can’t listen to an album that has terrible songs and lousy lyrics. Who would?”

Beach breaks down his criteria for an essential guitar album thusly: “It’s gotta rock, it’s gotta sound good, and it has to have the songs. I want the whole package. I can’t listen to a guy soloing over music that’s just a vehicle for virtuosity. I tried to get into Allan Holdsworth’s solo records – and he’s a brilliant guitarist – but I just can’t dig on his music. It bothers me. I loved it when he played with Jean-Luc Ponty, but his own records leave me cold.”

Van Halen’s 1978 debut album – a benchmark for two generations of axe slingers – turns up on Beach’s list of essential guitar albums. Here again, despite Eddie’s celebrated fretboard skills, Beach points to the strength of the material as the disc’s main calling card. “Would Eddie have had the impact he did without such good songs?” he asks. “I keep waiting for these Berklee grads to come out with something that changes the world Van Halen did, but it never seems to happen. People want awesome songs. Your guitar playing should be a bonus.”

“All of my records at this point were hand-me-downs from my brother. He had this record because Sweet Home Alabama was on it – that was the big hit on the radio. The second I heard the guitar playing on Second Helping, even though it was a little on the country side, I just went, ‘Whoa. This is amazing!’

“The guitar playing was so good that it was way over my head – I couldn’t play it at all. It was like this big brass ring that I wanted to reach, but I just wasn’t able to get there. Technically it was perfect, but it wasn’t sterile. It had total soul. It was on the clean side – beautiful tone – and you could hear all the little chirps and pops. It sounded like real guys playing together in a room, like you were there. It was orchestrated perfectly.

“Every song was brilliant, and the album was really diversified. You’ve got honky-tonk stuff, rock stuff, funky grooves, and the guitar solos are insane. I didn’t know which guitarist was doing what, but it didn’t matter to me at that age. Here was a big guitar band with a huge sound, doing stuff that was too complicated for me to even attempt to play.”

“Molly Hatchet was a less complicated version of Lynyrd Skynyrd, so I sat down and learned their first album. All the songs were good, and the solos were super-easy pentatonic things that I could master. I’m not putting it as one of my essential guitar albums, though.”

“I hadn’t heard a sound like that – huge, gritty, tough guitars that just came right at you. From the very first song, it’s nothing but cool, fast rock songs, but the whole thing sounds like an orchestra. Two guitars, just a little bit out of tune, but they fit perfectly together. And all the solos are incredible.

“I was living in Boston at the time, so all the kids were into Aerosmith. I got turned on to Toys in the Attic and marijuana, and the two things went very well together. I wasn’t really a blues guitar fan, but I dug what Joe Perry and Brad Whitford were doing. I played along to this stuff like mad – I was a little better than when I was trying to play Skynyrd.

“Toys in the Attic was the be-all and end-all for me. Without the Internet, I absorbed everything a man could from this album. I learned who did which solo, the whole thing. I said, ‘This is what I want to do.’”

“My mom bought this album for me. I was so into Aerosmith, and she went into Peaches Music and asked a guy, ‘What would my son like?’ The two hippest albums at the time were Boston and Kansas’ Leftoverture. She got me both of them.

“I was a little disappointed at first when she gave me the Boston album. I heard More Than a Feeling on the radio, and it seemed too happy to me. It was uncool. But then I put on the album and checked out the rest, and man, it completely blew me away.

“The solos are unreal. What beautifully melodic playing! What’s interesting is, I’ve heard that Tom Scholz always thought his solos sucked. News to me – I thought they were brilliant. He did the double-solo thing in Hitch a Ride, and wow, that one floored me. Totally unique. And you can’t beat the tones. Tom Scholz worked for something like seven years recording the album, all on tape, and he revolutionised the way guitars could sound.”

“Everybody picks this one, and I’m no different. You have to include this one on any kind of ‘essential’ list. Nobody had ever heard something like this. It was completely groundbreaking. I was at a school for creative kids in Vermont, and one of the kids there had the Van Halen record. I checked it out, and I stole it from him – it’s one of the only things I ever stole. I feel bad now, but there was no way I was gonna give this back. Forget it.

“I listened to it every day and thought it was amazing, but I wasn’t really influenced by it – not really, I don’t think. I got the idea of tapping from Eddie, but I couldn’t do it like him. I tried learning ‘Eruption,’ but I just couldn’t do it justice.

“Still, it was exciting and it felt very vital. The band was a three-piece, with the greatest solos you ever heard. It seemed as if the needle was going to jump off the record because the music was so alive and forceful. Fantastic songs, an incredible singer and guitar playing that knocked you on the floor. What more could you want?”

“This album was my transition into the world of jazz. More than anyone else, Larry Carlton taught me the importance of phrasing. I learned how to stop from this record. Before this record, I would just play and play – and overplay. Hearing Larry, I learned to trust myself. I said, ‘I feel like stopping, so I’m gonna stop right now. And you know what? It’ll be cool!’

“The other thing I got from this album was holding your notes. You play a note and let it sustain over the next bar, and then you come back in at weird times. It takes a while to get comfortable with that, but it really changes things up in a cool way. Larry’s bebop chops really get me off. I wish I’d learned this stuff much earlier, before I got kind of set in my ways. Even so, it was an eye-opening experience for me.”