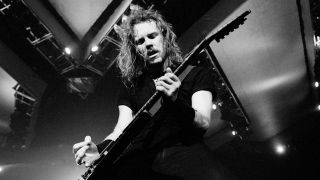 The mystical appeal of ‘boutique’ guitars, amplifiers and effects units is as healthy now as it’s always been and, thanks to modern retail options, just about any item of even the most obscure gear is available to buy. Gone are the days of someone like Joe Perry chatting loftily about using an obscure amp that was built by a guy in a Californian shed. Now you can get one too.

Amp manufacturers Mesa/Boogie, based in Petaluma, California, are the brainchild of certified amp genius Randall Smith. Their current product range straddles both the boutique and mainstream markets by offering units that are built to the highest possible standards, possess that vibe of exclusivity and sound amazing too. What’s more, they’re almost magically versatile, and have attracted a diverse roster of musicians that includes guitarists John Petrucci of Dream Theater, jazzer Al Di Meola and bluesman Keb’ Mo’, among many others.

Pictured here is the King Snake, a contemporary reissue of Boogie’s first amp, the Mk I combo, which is also significant in that it featured the world’s first high-gain valve pre-amp, which enabled players to obtain a warm, smooth overdrive sound without turning the amp all the way up, thus deafening the front rows.

The man who first gave this new amp and tone the exposure it deserved was Mexican legend Carlos Santana. While playing in the band named after him, he opened eyes and ears in the early 1970s with a searing sound previously not available to guitarists.

Santana’s original Mk I Boogie featured a covering of lambskin that was embossed with a snakeskin pattern, a look that’s been recreated with the King Snake. And although the design might be traditional, Boogie have also included more modern features. These include a custom-designed KS-100 12-inch speaker, their Multi-Watt selectable power system, and a switchable presence circuit that offers two distinct settings for added tonal control.

Playing a guitar through any Boogie amp is a genuine treat, irrespective of your style. The King Snake… well, it’s a wonderful thing, all full of warm, grainy girth and articulation. And even though it’s priced at an eye-watering £2,799, you’ll need to be quick to grab one as production is limited to just 400 units worldwide. But as it possesses more tone than you can shake a PRS guitar at, it’s got to be worth the lolly.

Boogie’s Mk I amp might have been instrumental in starting it all, but arguably Mesa’s most lauded amp of more recent times is the Rectifier, which uses cascading gain circuitry to give a tone so heavy yet articulate that it went on to define the sound of early 90s metal. Try a Rec’s modern high-gain channel setting and be amazed. Metallica had been staunch users of Marshall amps but, prompted by producer Bob Rock, James Hetfield (pictured) used a combination of Marshall and Boogie amps to obtain the massive rhythm tone that anchored the Black Album to the ears of everyone who heard it.To recreate that heady studio mix, Hetfield and fellow Metallica guitarist Kirk Hammett used Mesa/Boogie Triaxis pre-amps (the Triaxis offers no fewer than eight pre-amp modes) fed into specific Boogie power amps, and lo and behold, a legend was reborn on stage. And they still form the cornerstone of Hetfield’s live rig.