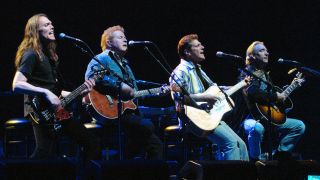 Formed in Los Angeles in 1971, country rock hedonists The Eagles have sold a colossal 120 million albums, a whopping 29 million of which are their Greatest Hits 1971-1975, the USA’s best-selling album ever.

It’s been almost 30 years since The Eagles’ last studio album.

Ha ha! We’ve been touring quite a bit since we got back together in 1994, and we’ve never been good at writing on the road. But the main difference now is that everybody is deeply involved in being a good parent and not having our kids grow up to be Paris Hilton or Britney Spears. Things are different to when we were young and self-absorbed and all we had to think about was music and girls. We’ve also had some personnel problems, and all that turmoil was a major obstacle that crushed the creative spirit.

I heard that you personally wanted the new record to be a single album.

True. I strongly opposed a double album, but Mr Frey wanted a double record and he’s the boss. Everybody thinks I’m the boss, but I’m not. Part of it was band politics. When you have four lead singers, you want everybody to be represented, but frankly, Joe and Timothy didn’t bring in a lot of material. We were waiting for it, but it never came.

Tell us about No More Walks In The Woods, the album’s harmony-drenched opener.

We wanted something that said: ‘The Eagles are back and we can still sing.’ I suppose it has an environmental aspect to it, but it’s also about lost youth and lost love. It’s an adaptation of a work by the poet and former professor emeritus at Yale, John Hollander. I was thumbing through The Oxford Dictionary Of American Poetry and I came across his work. I sent him the demo I’d made and asked for his blessing. And he sent back a very cordial note saying we could do the song. I said: “Great! Go and get yourself a good lawyer – this is the music business!”

The title track of Long Road Out Of Eden has been attracting a lot of attention for its political comment.

Basically, it’s about American foreign policy and American energy policy – and those are largely one and the same thing. It was hard to condense those themes even into 10 minutes.

Is that song the new Hotel California?

It’s more serious than that.

You were born in Gilmer, Texas, so it’s interesting that you’re so critical of the US oil industry and the Bush administration’s relationship with it.

Listen, there are plenty of us from Texas who are not Bush fans. We saw who he was when he was Governor of the State. Texas gets stereotyped, but there are a lot of diverse opinions there. And let’s remember that George W. Bush was born in Connecticut. He’s not really a Texan.

The lyrics for the song Frail Grasp On The Big Picture seem pertinent here. One critic reviewing the new album described the song as “enough to send Fox News pundits into apoplexy”.

I certainly hope so. I blame [Fox Network owner] Rupert Murdoch for a lot of the world’s ills. We just got asked us to play at half-time at the Super Bowl, but we won’t do it because it’s on fucking Fox.

While you were writing the new album were you at all intimidated by your own back catalogue?

We were. We knew that some people would automatically say: “These songs aren’t as good as Hotel California and Desperado. There’s no objectivity in that, because those songs are connected to a time in people’s lives that they can’t get back. In the end we decided to just do what we do best, and if the album doesn’t do well nobody’s going to jump off a building.

The ballad Waiting In The Weeds is another highlight from the new record.

That’s my favourite. On the surface it’s a story about a guy who has lost his love to some other guy, but like [Henley’s solo hit] Boys Of Summer it’s also about a guy that’s getting older. You could say it makes reference to The Eagles, too. There’s a line that goes: ‘I’ve been biding time with crows and sparrows while peacocks prance and strut upon the stage,’ because when I turn on my TV I see all these new bands that sound the same. _Waiting In The Weeds _is about having faith that quality will prevail.

What do you think of bands such as Radiohead offering their music for download almost for free?

This industry creates a lot of jobs, so I don’t understand these people who think music should be free. Why don’t they think cars or food should be free? Why have musicians and other artists been singled out? The internet is killing copyright. Our album was available for illegal download on the day it came out, and it’s just not right.

You turned 60 in July 2007. How did you celebrate your birthday?

I went surfing with my nine-year-old son. I’m still learning, but I’m doing okay. I’m in pretty good shape, I think. I couldn’t tour and play drums every night if I wasn’t. All the debauchery stopped a long time ago. I still like a glass of claret, but that’s about it.

How do the four members of The Eagles get along today?

I’d be lying if I said there weren’t difficulties, but it’s all about compromise. You have to remember that there’s this thing out there called The Eagles that’s much bigger than the individuals concerned. Some days I feel like going: “Fuck it!” But what can you do? None of us is going to change now.