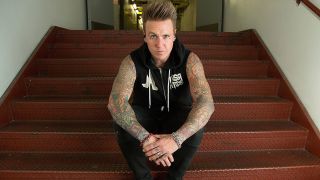 Following the tragic deaths of Chris Cornell and Chester Bennington earlier this year, the topic of mental health has been in the spotlight across the music industry. We have previously investigated why depression is on the rise within the rock and metal scene, plus in the new issue of Metal Hammer (and on TeamRock+) we talk to experts about how we can really make a positive change to help those struggling with their mental health.

Papa Roach frontman Jacoby Shaddix is no stranger to mental illness, he sees a therapist himself and recently became an ambassador for the Re-Mind Project, which promotes compassion for those who need it.

“When we were writing our record The Connection, that’s when I really understood the raw, real power of what music and lyrics can do for you, because the music saved my life,” Jacoby tells Metal Hammer. “Just recently, with Chris Cornell and Chester, you just see how ripples of suicide affect people on such a major way.”

We recently sat down with Jacoby in London to talk about mental health and its relationship with rock music.

Do you think the rock scene is doing enough to tackle mental health and open up the discourse?

“I think, in general, mental health is the next frontier in health for humanity. Now, we’ve got to a place where we can understand physical health, and the brain, the mind, is the next frontier of discovery. We’re right at the beginning of this, where they’re starting to really make strides. I really, truly believe that rock music has been dealing with mental health issues since the beginning. It’s a way to express our demons, speak our truth, our darkness, and find some sense in all of it. But when it comes to broader strokes, the pharmaceutical companies have proved themselves not up to the task of taking care of our mental health. There’s a better way for us to fix ourselves other than just medicating the fucking masses. You see the commercials for the depression drugs, and it’s like, ‘Side effects may include weight loss, weight gain, ulcers…’”

And if there’s money to be made off it, it’s hard to see where the discourse is gonna open up properly on that side…

“That’s why they say money is the root of all evil. Fortunately, I feel like I’m on the ‘good team’, and a lot of the time, what’s helped me out of those dark places is music, and also human interaction. We have a tendency, as individuals, to isolate, and I think that’s a big part of the problem. We’re not honest about what we’re going through, and it just fucking eats you up until you’re so desperate that you’re like, ‘It’s just not worth it any more’. And it’s just so tragic, especially with a friend like Chester. I went out to dinner with him a month before he took his life. He was all jovial, boisterous, focused and on point, and [it just goes to show] you never know what people are struggling with. Mental health sees no bounds. It doesn’t matter if you’re rich, poor, anything like that. Everybody has issues, and it’s such a prevalent thing right now. It needs to be talked about. So it’s definitely the next frontier, and if some good people can get in there and empower us, we might be able to come to some sanity, but if we keep medicating the masses, it’s not gonna help.”

So much of the rhetoric is that if you’re struggling, you should talk to someone, but often that can be really hard for people. What do you think we can all do better?

“Well I’m telling you, if you’ve got a friend that you think is going through some fucking darkness, press in, go talk to them, see where they’re really at, you know? A lot of the time, people might not be forthright about what’s going on, because there’s a lot of shame in feeling that way. If you’re at the end of your rope, it’s a very hard thing to admit. I see a therapist. I like going in and just talking to somebody where there’s no preconceived notion of how they need to treat me. There’s no baggage. It’s just, ‘I’m here to listen’. And nine times out of ten, for me, it’s like taking the pressure valve off. And stress levels, period, for everybody, just keep going up. It’s an issue that needs to be talked about.”

Read about how we can take positive action to help those struggling with mental health problems in the new issue of Metal Hammer – on sale now. Buy it directly here or become a TeamRock+ member to read it right now.