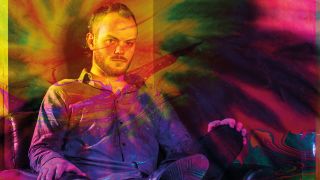 So Brett, when did you first develop an interest in psychedelic culture?

Brett Campbell: “I’ve always been interested in it from a very young age. As soon as I heard about what acid was I knew I wanted to do it. It’s such an interesting thing. In my early 20s and late teens I began experimenting with things, to rewire my brain. I was raised in a very conservative household, and one day you realise that everything you’ve been taught is complete bullshit. You know what I mean? So I thought, ‘Oh wow! I have to rebuild everything I know!’ And I was trying to come up with my own personal philosophy. And that became part of it, experimenting with psychedelics. Which had a very positive impact on me.”

Do you feel that it is positive for everyone?

“No, that’s not true of everyone. In fact, I know a lot of people that have had psychotic episodes. They’ve gone too far into it and haven’t come back. That negative stereotype of drugs exists for a reason. In many ways it’s well founded. I only had a positive impact because I used it responsibly. I didn’t want to lose my mind.”

So what about it attracted you originally?

“I’ve always been attracted to the extreme. Not just extreme metal but music that really experimented. The culture that came out of that in the 60s, the breaking down of typical mental constructs can be a really wonderfully creative thing. Because you are forced, through a period of almost pseudo-madness, to be more introspective and read more into things. True creativity that stands on its own and is idiosyncratic is really attractive to me, and I feel like psychedelics are a really big part of that.”

Why do you think there’s been an underground resurgence in psychedelic sounds recently?

“Who knows? Maybe it’s because, as far as I’m aware, psychedelic use decreased during the 80s but has crept back up again recently. People are searching for something again. The disposable culture we live in isn’t very rife with meaning. Living a typical life, the capitalist, consumerist lifestyle, isn’t very fulfilling for many people. Being creative is one of the things that can exist in a society that doesn’t look very far beyond the bottom line. Psychedelics are a window into that.”

How big a role has it played in the music of Pallbearer?

“It’s hard to say. It was inherent in me and Joe’s [Rowland, bass] previous band. It was the sonic representation of ‘This is your brain on drugs.’ But I’ve always been interested in non-traditional song structures and progressive ideas. And so I think that my mind has a wider perspective because of my psychedelic use. It’s hard to gauge. I think it’s made me a more peaceful, open and patient person, so if I could quantify it then I think that it may be in the lyrics.”

On a scale of 1-10 just how metal IS psychedelic culture?

“Well, it all depends on the band, I guess! If you’re talking about something like Megadeth on the psychedelic scale then that’s a zero! But if you listen to some avant-garde metal bands then it’s about an 11! Undoubtedly some of those post-rock bands have taken psychedelic drugs. It’s not very thrash, but it’s certainly there in the slower, more doomy bands. That sound is really metal. And psychedelic drugs have given me the patience to concentrate on those long songs and more drawn-out sounds. So I guess that is pretty metal. Who knows what’s next? PCP metal maybe?! Ha ha ha!”

HEARTLESS IS OUT NOW VIA NUCLEAR BLAST

WARNING! TAKING ANY ILLEGAL SUBSTANCES CAN BE INCREDIBLY DANGEROUS. TO READ MORE ABOUT THE EFFECTS OF DRUGS, VISIT WWW.TALKTOFRANK.COM

Joe Rowland from Pallbearer recommends a movie, a book and an album

Brothers in qualms: How Pallbearer are taking over the world