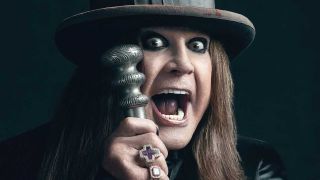 We’re sitting in his stately house, in a wellheeled pocket of Los Angeles, but word has it that Ozzy Osbourne is looking for a new one. Is that true?

“I don’t fucking know,” comes the reply. “My wife’s always looking for houses. My wife’s a terminal house hunter. She must have had ten houses now.”

Prince of Darkness, metal icon, former Black Sabbath frontman and current solo artist, Ozzy has spent much of the past year at home. This wasn’t the plan, but after a fall aggravated an old quadbiking injury he was forced to cancel all of his scheduled 2019 shows. Sadly, since then he has confirmed that he has also been battling Parkinson’s disease.

“It’s just been one thing after the other,” he says. “I don’t drink, I don’t smoke, I don’t do drugs any more, and all this shit happened [laughs].”

An upside of all this enforced time off the road is Ordinary Man, the searing solo record he made with producer Andrew Watt.

“I just was imploding emotionally,” Ozzy explains. “Lying on the couch every day, doing the same thing… you really get into your head – and your head never tells you anything nice. My head, anyways: ‘It’s over. You’re going to die… But then the album… well, it saved my life, you know?”

So Ordinary Man: is that your biggest fear – to die as an ordinary person?

It’s kind of like… When I started entertaining, shall we say, up until that point I was an ordinary guy. Music gave me everything. I don’t have a trick, I don’t know why, I don’t know how. I suppose it’s just what my fate was, do you know what I mean? We started off playing at the Star Club Hamburg, you know, where The Beatles played. The Beatles were the one that did it for me. There will never be another Beatles.

But do you worry about being forgotten by the younger generation?

Well, if they remember me they do, if they don’t… I didn’t do it to be remembered. I did it to give people a bit of fun in life. However, an ordinary man wouldn’t probably live in a beautiful house like this.

I’m not an ordinary man in a… I should have just called it ‘I didn’t want to die an ordinary man’ [laughs]. Well, in all my success I don’t love to think that I’m a big head; I don’t go: “Okay, get me this, get me…” No, that ain’t me. I still get my own stuff if I can. But I wish I could do more.

Can you offer any explanation for your ongoing success or the longevity of your career?

I can’t answer the question because I don’t know it. I must be the luckiest man in the world. It’s been ten years since my last studio album, and this album’s doing well.

Is it because people see in you what they wish they could be – at least some of the time? Don’t we all want to be a bit Ozzy at times?

Will your next tour be the last thing we hear from you as far as playing live?

Well, what I said was I’m not touring the world any more. I can’t. I’ll do shows instead of going on a world tour. By the time I go to Europe I’m usually burnt out, so I’m going to do a European tour then take a break for as much as I want. Do you know what the thing is now? Everyone does this thing in Vegas. If I ever have to do that, that will be interesting, because I don’t like doing more than one night at one place.

So what can people expect from the tour?

Oh, hopefully I’m recovered, you know? Because I can’t afford to go out there again and cancel again. I’ve got to be physically able to do it. Right now, I couldn’t do it.

Who’s going to be in your touring band? Is it the ‘usual suspects’, or the guys who joined you in the studio?

Oh, absolutely. Zakk, Tommy, Blasko, Adam. They’re all waiting to go, you know. But they’ve been really good. I mean, Tony Iommi from Black Sabbath has been so supportive. The only one I haven’t heard from is Geezer Butler. Even Bill Ward phoned me the other day. He’s probably on the road with his band, I suppose.

Let’s presume you’ll actually be slowing down after this tour. Will you turn into a family guy or pick up a hobby?

Well it will be a new experience because I’ve never been at home. And this fucking last year’s driving me nuts, because I’ve been at home for a year and it’s been a lot… I’m not retiring so much as semi-retiring. I’m going to be spending more time at home, but I’ll always be involved in music to some degree until I’m totally crippled. [laughs].

What’s the meaning of life?

At the end of the day, you can look back down the road and say: “Well, I did it my way.” I’m seventy-one now. Looking down that road, there’s so many people that have gone. Gary Moore, he was a good friend of mine. I used to go drinking with John Bonham, and the drink killed him years ago. But there’s so many great musicians gone.

Does that make you nostalgic or even melancholic?

Ordinary Man is out now via Epic Records. Ozzy’s UK tour is scheduled to begin in Newcastle on October 23. This feature was originally published in Classic Rock 274, in March 2020.