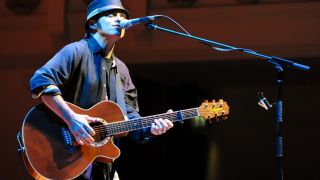 Nils Lofgren features in the current issue of Classic Rock, where he talks about seeing Jimi Hendrix in 1967, why Neil Young doesn't do chit-chat, and the two Bruce Springsteens. To whet your appetite, here are ten great moments from the guitarist's star-studded career.

While still a member of his first serious band Grin, Nils briefly joined Crazy Horse, writing two songs for their eponymous 1971 album. He re-recorded one of them for Grin’s final long player, ‘73’s Gone Crazy, as a eulogy to late Crazy Horse guitarist Danny Whitten.

A tour de force of unquenchable vitality and disarming subtlety” is how Rolling Stone magazine described Lofgren’s self-titled solo debut in 1975, the same year he visited the Old Grey Whistle Test for his first appearance on UK television. This song was also the title track of a promotional live album much sought after by Nils collectors.

Lofgren’s work with Neil Young and Bruce Springsteen is well known, but his 1979 collaboration with Lou Reed is less heralded. Although he didn’t play on the record itself, Nils co-wrote three tracks on Reed’s album The Bells, including this tribute to Charlie Chaplin.

Nils first played with Neil Young as a precocious teenager on 1970’s After The Goldrush, and was also an integral part of 1982’s notorious Trans album. Young’s radical use of synthesizers and studio effects made him the subject of a lawsuit by his own label, for producing “deliberately uncommercial and unrepresentative work.”

Secrets In The Street

When Steve Van Zandt took a break from The E Street Band in 1984, Bruce Springsteen called upon Nils as his touring replacement, the boost to his profile propelling his ’85 album Flip into the charts. This song, with its video showcasing Lofgren’s famed gymnastic and trampolining talents, gave him his only entry in the UK singles chart.

One of the highlights of Springsteen’s world tour to promote the Born In The USA album was Lofgren’s extended guitar solo on Because The Night. Up until that point Bruce had yet to release a version of the song himself, the best known recording being Patti Smith’s 1978 hit.

Just days after playing Wembley Stadium with Springsteen and the E Street Band in July 1985, Lofgren rocked up at the neighbouring Wembley Arena to guest with Dire Straits. Here he is adding a blistering guitar solo to Solid Rock, originally from band’s Making Movies album.

After two lengthy world tours with the E Street Band, Lofgren resumed his solo career with the release of Silver Lining in 1991. His erstwhile “Boss” was still in the picture, though, most notably on the album’s first single, Valentine.

Long May You Run

Lofgren’s last high profile collaboration with Neil Young was for MTV Unplugged in Los Angeles in 1993. He recalled the show in the 2011 documentary Don’t Be Denied, explaining how he persuaded Young not to drop one of his favourite songs from the set.

The Life And Times Of Nils Lofgren