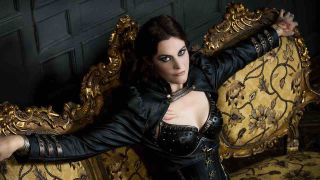 Floor Jansen hasn’t been wasting her time in lockdown. “I have two horses, so I've been getting to ride a lot.” says the Nightwish singer. “Plus I've been growing veggies and flowers. And I occasionally sit down at my piano and write.”

For Nightwish, as for every other band on the planet, 2020 hasn’t quite shaped up as expected. The symphonic metal giants’ year should have been taken up with touring in support of their ninth album, Human. :II: Nature. That record was released in April, just as the world shuttered its doors, throwing their plans into turmoil.

“We couldn’t even rehearse for the tour,” says Floor. “We were supposed to, but it was just before the flying ban came in. Some of us are in different countries, so we couldn't even meet to rehearse.”

Everything that’s going on is out of your control, but it still must be frustrating.

Actually, no. Putting the album out at a time like that meant that people actually had a lot of time to listen to it.  And the feedback we got was that they were grateful to get the album. It’s been five years since the last album, and people really appreciated that it came out when it did.

Be honest: what were your first thoughts when Nightwish keyboard player and mastermind Tuomas Holopainen presented you with the idea for a double album, half of which is a 30-minute instrumental orchestral track?

If it was anyone else but Tuomas suggesting it, I would have thought it was crazy. But because it was him, and because he’s so brilliant, I thought, “That's a great idea, you should write that, I can’t wait to hear it.”

But then if any band can do this, it’s us. We already had [2015’s 24-minute epic track] The Greatest Show On Earth. This song [All The Works Of Nature Which Adorn The World from the new album] is just the bigger brother of that. It’s a logical sequel. The only reason it became a double disc was because it wouldn’t fit on one CD.

Was it a tough album to make?

Well, there is enjoyment in difficulty. I was properly challenged – there are some difficult melodies in Music and Shoemaker. Some verses are extremely tricky to sing. But you want to constantly challenge yourself. We we didn’t think, ‘Ninth studio album, we're Nightwish, we can just sit back and copy the thing we've been doing for the last 20 years’ That doesn’t happen. We're still a very hungry band.

Endless Forms Most Beautiful was a huge-sounding album. Were you trying to out-huge yourselves with this one?

I think in a way you're always in competition with yourselves, but more to keep it fresh. I think this album sounds big and bombastic and huge, but then there's no orchestra on the nine songs we play on as a band. There's a string quartet and a choir, but no orchestra. That's pretty unique, because previous albums were pretty packed with orchestras.

Can you ever see Nightwish making a fully acoustic album?

I'm not sure if an album would work, but I could imagine us doing a tour. Personally, I can imagine that would be enjoyable.

You released the debut album from your hard rock project Northward in 2018. What did you get out of that that you don’t out of Nightwish?

Mainly the fact that I wrote it myself, with [guitarist/musical partner] Jørn Viggo Lofstad. There's a lot of me in there, in a different way than with Nightwish. It's a different style too – a genre that I haven’t done much in before. I was way more involved, in that it all came from me.

Do you want to make another Northward album?

I'm not sure I will. That project was written in 2008. Because we had a year off from Nightwish, I was able to finalise it, to see if the songs are still up to date, whether we could record it or not. I was just happy to have a moment to release it, 10 years after we wrote it.

But after 20 years of rock and metal, I think I would like to do something else. I don't mean stop with Nightwish, but something alongside it. I was recently involved in a TV show in my home country in the Netherlands [reality series Beste Zangers, aka ‘Best Singers”]. That really inspired me to start writing, and the stuff that has come out is very calm.

I would love to make an album where less actually is more. Something different – not because I’m bored, but because if you are already in one of the biggest bands in your own genre, and you have someone like Tuomas Holopainen as a songwriter, I don’t really see that I’d be adding anything by making another metal album myself.

In meantime, there is still a Nightwish tour scheduled for late 2020. Are you itching to get back out on the road?

Of course. But since I know I can't, I don’t want to waste too much of my time thinking about it.