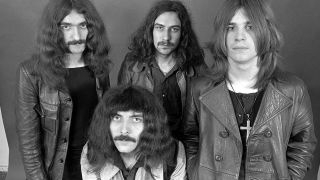 Metal Hammer readers from across the world have been voting all week for their favourite Sabbath album of all time.

And we can now reveal that the Black Sabbath album YOU think is worthy of the ‘best in the world’ crown is Master Of Reality!

Master Of Reality was the Birmingham heavyweights’ third release and the first time we saw the now infamous floating purple logo. And is it any wonder you guys named it as the greatest album when its tracklist includes Sweet Leaf, Into The Void and Children Of The Grave?

Here are the top ten Black Sabbath albums as voted for by Metal Hammer readers:

In the latest issue of Metal Hammer we talk to the four founding members of Sabbath – Ozzy, Tony, Geezer and Bill – about the band’s legacy and why now it’s time to call it a day.

You can read Metal Hammer the way you want. Instantly read the articles from issue 277 of Metal Hammer and dive into the back issues right now on TeamRock+. Experience the interactive digital edition for your iPhone and iPad or Android device.

Get a copy of Metal Hammer 277 delivered to your door here.