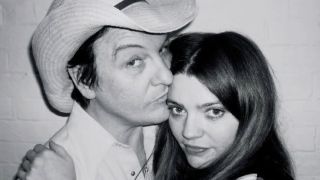 Making music with your other half can sometimes be a volatile business. Songwriters Nick Marsh and Katharine Blake had played on each other’s records in the past, largely without incident, but their latest endeavour was a lot more tempestuous. “It was a recipe for a fucking bloodbath,” says Blake with a laugh today. “The whole thing was pretty fiery. We’d have got it done a lot quicker if we’d cut out all the arguments, but when it’s your partner it’s no holds barred.”

Blake is talking about From The Deep, an album of smouldering duets recorded by the couple over the last few years. The songs themselves are finely weighted between the classical folk leanings of Blake (Miranda Sex Garden, The Mediaeval Baebes) and the goth-rock exotica of Marsh, formerly of Flesh For Lulu and, more recently, The Urban Voodoo Machine.

Yet From The Deep isn’t just a set of boy-girl come-ons: it was Nick Marsh’s last recorded work before he died of cancer this June. He was just 53 years old. The album’s motifs – devotion, loyalty, passion – are understandably loaded with a dual sense of poignancy and tragedy.

I meet Blake in a spacious boozer in Leyton, East London, just around the corner from her new house. She and her two children are still in the process of moving in, the council having relocated them from Ilford, a few miles away. Factor in work commitments – Blake only returned from touring America with The Mediaeval Baebes a few days ago – and it’s been a hectic time. “I’ve had this relentlessly stressful shit going on in my life,” she says, “so I just want to get settled now.”

It has, of course, been an extraordinarily difficult 18 months. Marsh was first diagnosed with cancer in the spring of 2014, after which he underwent a series of treatments involving chemotherapy, radiotherapy and two rounds of surgery. “Everyone was really positive at first,” recalls Blake. “I really didn’t think he was going to die. But it just returned very aggressively. The third time it came back, we found out that it was terminal. Nick was dead seven days later.”

Blake laughs a lot and looks well, if a little tired. All things considered, there’s little outward sign of a woman in deep crisis.

The pair first met at one of Blake’s house parties in the early 90s. Marsh was then in the last throes of his tenure with Flesh For Lulu, founded in 1982 as a meeting place for his obsessions with goth and glam. The band issued four albums and a clutch of wonderful songs – Subterraneans, Postcards From Paradise and Siamese Twist prominent among them – but they’re perhaps best known for I Go Crazy. Its inclusion on the soundtrack of 1987 Hollywood flick Some Kind Of Wonderful gave Flesh For Lulu a sizeable college radio hit in the US.

Blake, meanwhile, was a graduate of the Purcell School of Music and had formed Miranda Sex Garden in 1990 as a trio of singers who specialised in Elizabethan madrigals. They soon morphed into something more modish, however, infused by dark elements of goth and Cocteaus-like ambience. By the time they disbanded 10 years later, Blake and some of her band members were already up and running with The Mediaeval Baebes, arranging Renaissance-era songs in new settings.

“When I lived in Holloway I used to go for all these wild themes for our parties,” Blake recalls. “When I first met Nick, the theme was ‘Pimps and Whores from Outer Space’. One of my best friends was going out with the brother of Nick’s girlfriend back then. So that was the connection, though I’m sure I would’ve met him anyway, because London’s just one big rock’n’roll soup.”

Blake says she and Marsh quickly became fast friends. As the beau of Miranda Sex Garden bassist Teresa Casella, he even served as the band’s roadie for a while. But it was only when Marsh made his first studio LP, 2006’s A Universe Between Us, that their relationship took a new direction. “We were mates for years,” says Blake, “then he asked me to produce his album. We got it on just after it was finished. Sometimes those friendships can just insidiously turn into something else.”

A year later, Blake released her own solo album, Midnight Flower, co-written by Marsh. “That was our first project as a couple. I’d come up with the melodies, then he’d weave his magic on guitar. That album happened very quickly.” Judging by its sleeve – a photo of a heavily pregnant Blake – so did their romance. Ava, the first of the couple’s two daughters, was born in early 2007. Rosa arrived two years later. “We didn’t fuck around,” she laughs. “We moved pretty quickly all round.”

Some of the songs on From The Deep date from the same period too, though it appears that the notion of recording together almost happened by accident: “I used to guest with Nick at his solo shows, before we were even a couple, and we’d do a version of [Lee Hazlewood and Nancy Sinatra’s] Summer Wine at the end. People seemed to like that, so we decided to develop that side of things. Summer Wine actually got us in the zone for the whole album. There just aren’t that many great duets – that’s the reason why we wanted to make From The Deep. Our voices go well together, I play strings and recorder and he plays guitars. I’m more classical and he’s more rock, so it’s a nice mix.”

Aside from variants of folk ballads and the poems of Christopher Marlowe and William Blake, From The Deep features some stirring originals. “A lot of the songs were ones that we’d both written but hadn’t finished,” Blake says. “Then the other person got involved and we finally got them done.”

As their first truly joint venture, the nature of the project brought out both the best and worst in each of them. One of the loveliest songs on the album is Inky Black Water, an artful piece of diaphanous dream-pop. Its mood is completely at odds with the circumstances that created it.

“We just kept having these childish arguments about who did what,” Blake grins. “Tensions were running high and the police even turned up one night. We were arguing about Inky Black Water and Nick threw one of my grandmother’s chairs against the wall. The neighbours must’ve thought he was beating me up, so when the police were called I just told them we were having an argument over musical differences. You must be doing well if you get so impassioned about something like that. That’s how much we meant it.”

From The Deep would’ve been released sooner, but Blake was hoping for Marsh to get better. It’s now become a fitting epitaph. In the weeks after his death, arranging the funeral served as a kind of therapy for Blake.

“I was still numb and in denial at the time,” she says, “so it put me in my comfort zone because I’m used to organising events. It gave me something to focus on. Paul-Ronney [Angel, Marsh’s bandmate in the Urban Voodoo Machine] came over every night for about three weeks, we’d get drunk, commiserate and obsessively organise it all.

“It turned out to be a really epic, rock’n’roll funeral in Epping Forest. We got all our musician mates to play, people made amazing speeches and there was lots of dancing. Paul-Ronney led all the horn players and drummers through the forest in a New Orleans-style marching band to Nick’s grave. And 21 past and present members of The Mediaeval Baebes sang Nick’s favourite song of ours, There Is No Rose Of Swych Vertu, around his coffin. The Facebook notice said: ‘Dress fabulous!’ so everybody looked really glamorous. A lot of friends from the 80s came. There were about 500 people in the end. It was very much a celebration of his life.”

After the funeral, says Blake, she became nocturnal and threw herself into her art. “I’d take the kids to school, sleep all day and then stay up all night making music. It was a form of escapism. I started writing an album of horror versions of nursery rhymes, which I’m still in the middle of. A lot of nursery rhymes hide behind metaphors so they can poke fun at authority and discuss really heavy issues, so I wanted to bring out the darkness in them. I’ve arranged about 30 so far, but that all came to a halt when Nick died.”

For all her ongoing grief, Blake also understands the need for pragmatism. Her children are already undergoing bereavement counselling and, as well as the upheaval of moving to a new house, there’s unfinished business on the recording front. Listening to From The Deep, she says, “is like having Nick in the room. I thought it would be a bit weird, but it’s not. It’s just nice.”

She admits that her next task, editing the video for album song Where Blue Shadows Grow, is a daunting prospect: “It was done just a few days before Nick’s final cancer surgery. Even though he was in fucking agony, he managed to film it, so the least I can do is go through the process of finishing it. But it’s going to be quite traumatic.”

Aside from her own record and a Christmas tour with The Mediaeval Baebes, there’s also the matter of completing Marsh’s solo album. He began recording around the same time that he revived Flesh For Lulu in 2013.

“One of the things that’s really devastating is thinking about all the things he was going to do,” says Blake. “It makes me really sad, but all I can do is try to finish these things for him. He’d written quite a lot of it, especially when he got better in between the two surgeries. Many of the songs are about death, which is weirdly prophetic. The working title is ‘Waltzing Bones’.”

In the meantime, Blake continues to be buoyed by “an amazing support network” of family and friends. And, of course, her music. “You can’t just fall apart,” she states. “If my kids need to keep going to the same school, I need to keep doing the things that I was before. There’s been so much change lately and music is a lifeline. MD’ing The Mediaeval Baebes is a walk in the park compared to the rest of my life. I’m a survivor, you know.”