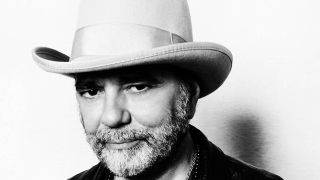 The Canadian musician and go-to producer for some of the biggest names in rock talks about balancing two careers.

You co-produced several U2 albums, including The Unforgettable Fire and The Joshua Tree, does that overshadow your own music?

Not really. I’ve lived with it for my entire career.

In your passport, does it say ‘producer’ or ‘musician’?

That first option usually gets me through immigration much quicker – especially if they think I’m a movie producer.

Bono recommended you to Bob Dylan. Was working with him a scary experience?

Sure, it was frightening. But the bigger the artist, the harder they’re looking for truth. Bob, like other great artists, has a pretty effective bullshit-o-meter.

Tell us a secret about Peter Gabriel?

It’s hardly a secret but Peter stood by his vision when the English press told him he was all washed up; that he had lost his way with African music. He was right, and those flippant, fashionable writers were all wrong.

A few of the most interesting things that happened to me in the studio were by-products of previous ideas. But we’ve also entered a place of uncharted territory.

Tell us about the live shows you’ll be doing.

Flesh And Machine will be well represented, but we will take things much further.

And what happens if someone shouts out for_ Pride (In The Name Of Love)_?

I’m actually seeing Bono tonight; maybe I’ll ask whether he has a hologram of himself that I can borrow [laughs].