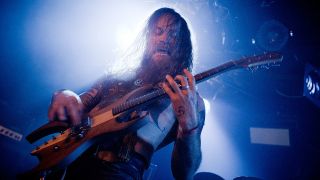 A band whose live gigs are akin to putting your brain on a spin cycle – albeit one slightly off its axis so that it rumbles and grooves like a motherfucker – Bölzer’s reputation has spread like a bushfire across the metal world since their inception in 2008. Festivals worldwide have been clambouring like zombies at the iron gates of a fat farm to book them while metalheads of all stripes have found themselves pulled into a vortex whose incendiary, heavens-prising energy has always felt more accommodating than elitist, no matter how uncomproming the nature of the band’s vision.

With only one demo and two cranium-cracking EPs, 2013’s Aura and 2014’s Soma, to their name, it’s fair to say that Hero – unleashed on November 25 via Iron Bonehead Records – is one of the underground’s most eagerly awaited debut albums in recent memory. Not surprisingly for a band revered for blazing their own, genre-defying path, Hero scoffs at the idea of merely reproducing the dense, groove-hammered whorl of the EPs, instead exploiting the scope of a full album to newly expansive effect, bringing in (relatively) clean vocals and making the fact this is the result of only one overdriven guitar and a set of drums even more a warping of time, space and rational thought to their own, indomitable will.

We are proud to offer a glimpse into the forthcoming furnace in the brazen form of Spiritual Athleticism, a track whose title is a perfect description of Bölzer’s fusion of convulsive heft and imperious, ultimately uplifting dynamics.

Plug yourself into the planet’s geomagnetic field, turn up the voltage until the alarm bells start to ring and prime yourself for Spiritual Athleticism below!