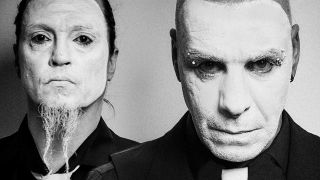 On December 4, 2018, Rammstein’s Till Lindemann strode into a Moscow book signing accompanied by a gimp on a leash. As he sat down to sign copies of his poetry collection, Messer, his companion knelt dutifully on the floor beside him.

It takes him a little while to recall the incident when we bring it up. “Ah, the bondage woman!” he finally remembers. “Book signings are so boring. It takes forever, standing in the cold and rain… so we brought something to entertain the people.”

Bringing a gimp to a bookshop is actually one of the meeker stunts Lindemann has pulled over the years. As a trained pyro-technician, his flame-throwing antics with German metal behemoths Rammstein have made him one of rock’s most controversial characters.

So on deciding that Russia was a long way to go just to sign some books, he used it as an opportunity to take Lindemann – Till and his bandmate, multi-instrumentalist, producer and Hypocrisy and Pain frontman Peter Tägtgren – an equally provocative, pumping amalgamation of Eurosynth and industrial crunch, on the road for the first time.

“It was a new start, an experiment,” he tells us today. “We needed to find out if it worked, if we had the right chemistry on stage. It was very crazy, small clubs, small venues."

Today Lindemann are back in Russia, shooting videos and conducting press for their second album, F&M. We meet them in St Petersburg, in the glass-walled roof restaurant of the plush Kempinski Hotel.

Just one block away, the brightly coloured onion domes of the Church Of The Savior On Spilled Blood rise into the air. It’s the perfect place for an interview with two of rock’s most unique characters. As we drink it all in, the duo, tucking into plates of fruit and cold cuts, recall how they met at the MTV Awards ceremony in Stockholm almost 20 years ago.

“You were still fresh in the game. [Rammstein] only had the second album out,” Peter remembers. “You opened Pandora’s Box. You were like: ‘Do you have any schnapps in Sweden?’ Because Germans always have apple Schnapps…”

“For digestion,” Till says seriously, nodding. “I’m like: ‘No, vodka maybe?’” Peter continues. “And he’s like: ‘No, it’s too much. Let’s do a couple of Jägermeister.’ It took a few hours, and then the war was on.”

“We puked, and then the same night we decided: let’s do music together,” Till says with a chuckle.

Due to Till’s Rammstein commitments and Peter’s numerous band and production commitments, it took them 15 years to record their first track together. Once they started recording, though, the project snowballed, leading to smutty debut Skills In Pills in 2015.

While Peter handled the music, Till’s perverse, ludicrous tendencies ran amok on tracks with titles like Fat, Ladyboy and Praise Abort. New album F&M is no less outrageous, with multiple songs about oral sex, as well as Gummi, a track about a rubber fetish.

Have they received any complaints?

“Of course,” Till shrugs. “The Christian groups, they come of course. But kids these days, they’ve seen everything."

Dressed all in black and towering over his bandmate, Till has an imposing presence. Yet as he repeatedly, perhaps nervously, removes and replaces his dark sunglasses, he’s a contemplative and quiet interviewee. And while Till procrastinates over our questions, Peter fills in conversational gaps with quick, sharp answers.

Despite their differences, though, the pair have an easy rapport that comes from decades of close friendship. Peter, what was your reaction when Till brought you a track like Gummi?

Till starts laughing. “In the beginning, the first song [we recorded] was Ladyboy, and he was: ‘Are you serious? Are you for real?’ He gave up on me a long time ago.”

While six of F&M’s 11 tracks are right out of Till’s mental gutter, it is undoubtedly an album of two halves. In 2016 the duo were approached by the Thalia Theater in Hamburg, who asked them to score the soundtrack for their modern adaption of Hansel And Gretel.

The five tracks they wrote and recorded for the production (Blut, Knebel, Allesfresser, Schlaf Ein and Wer weiß Das Schon) add much needed depth to F&M, touching on cannibalism, death and child abandonment – all topics Till has explored with Rammstein.

“My whole history inspires me, good and bad times,” he explains. “I take a lot from television, actually – from news, of course. Take cannibalism [talking about Rammstein track Mein Teil]. People were like: ‘You crazy motherfucker.’ This is not a story, it happened! There was a case in Germany – somebody ate the dick from another guy! You don’t have to be sick and crazy in your mind all the time."

As fun as it was, at times the sheer silliness of Skills In Pills made Lindemann seem like a novel concept, rather than something to properly plug the gaps between Till and Peter’s day jobs.

“You set a standard with the first album, and then people think: ‘Oh, this is how the rest of the career is going to be,’” Peter, says clearly aware of the questions surrounding Lindemann’s longevity. “We want to prove to ourselves that we can write different kinds of music. It’s important for us to develop."

Accordingly, F&M feels like a more serious artistic endeavour, a far more varied record than its predecessor – which, bar two ballads, was about as musically subtle as Rammstein’s penis-shaped canon.

Tapping into the unpredictable personalities of its creators, it feels like Lindemann have progressed beyond tongue-in-cheek laughs to something deeper and darker.

“I think a lot of people might have a hard time accepting it because it doesn’t go the way you think it’s going when you listen to it the first time,” Peter says firmly. “But we don’t write for anybody. We write for ourselves.”

F&M is out now. Lindemann are currently on tour.