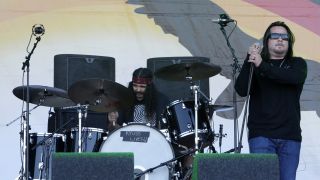 Average rock goons had it good in the 70s. AC/DC were huge and they looked like everybody’s drunken uncles. Bachman-Turner Overdrive could’ve worked with you down on the docks. Blue Öyster Cult were just fuzzy nerds with stun-gun guitars. You could let it all hang out, roll some dope and freak freely. But then the 80s kicked in and suddenly it was all boys in make-up setting their legs on fire. Who can compete with that? Suddenly slob-rock was dead. All the dope smokers got jobs and gave up their pinball dreams.

Then came Kyuss. They blew in from the California desert, dusty and red-eyed, at the tail-end of the 80s. They were fortified by punk, like the kids in Seattle, and got turned on to ZZ Top, Black Sabbath and mid-70s funk by their big brothers and sisters. Despite their almost instant reputation as in-the-know proto-metal revivalists, Kyuss were not the cook kids. They didn’t care about clothes or scoring chicks or throwing parties on yachts, they just liked to smoke a little weed and play loud, groovy rock music. And stringy-haired slackers everywhere rejoiced anew.

Kyuss’s frontman John Garcia joined the band in 1989 while he was still in high school in the tiny community of Palm Desert, California, back when the band called themselves Katzenjammer (German for ‘hangover’) and practised in drummer Brant Bjork’s bedroom. “I played football with Nick Oliveri and Brant Bjork and Chris Cockrell, the original bass player. Nick kept bugging me to see his band, Katzenjammer, play. This is when they still jammed in Brant’s room. So one day me and my buddy went up there, and that was it for me. I wanted a piece of it.”

After a quick Dungeons & Dragons-related name change and the addition of guitarist Josh Homme, the newly christened Kyuss began playing a now legendary series of ‘generator shows’ - outdoor gigs in the desert, away from parents, teachers and cops. While these shows were in actual fact locals-only events, over the subsequent decades they’ve grown into mythical, Woodstock-like events that were seemingly attended by thousands, if not millions.

“Yeah it’s funny, there really weren’t that many people out there,” Brant Bjork recalls, “but it seems there’s quite a few more claiming that now. It was really just desert locals. It’s rare to bump into someone who actually saw us in those days. Ironically, one of the people I’ve run into who actually saw Kyuss in the desert was Tony Alva, the skateboarder.”

Regardless of the mundane reality of those early outdoor shows, they ultimately forged the Kyuss legend. Under a merciless, blazing sun, the band fused punk, metal, funk and classic rock into one big, groovy ball of psychedelic rock.

“I would humbly say that when Kyuss was around I never ran into another band that was like it,” says Bjork. “We were not punk and not metal, we were somewhere in the middle. The same could be said for Monster Magnet.

“And there was another band from up north that we were aware of a little later on, which was Sleep. Those were the only bands who were doing something that we considered interesting and cool. There were other bands that we liked, of course - Soundgarden, St Vitus, Melvins, things like this - but it wasn’t quite what we were into.”

The sound that emerged from Kyuss would eventually be labelled and lauded as ‘desert rock’, but at the time it sounded like it was from outer space. More primal than grunge, groovier than metal, way too stoned for punk, Kyuss was simply, singularly Kyuss.

Eventually people outside of their tiny circle took notice. The band outgrew their home-town roots and started playing in LA. Which, it turns out, was just fine with Bjork.

“Back then we were pretty bitter about playing in the desert, because we were growing up in Southern California but we weren’t at the beach. I know everybody thinks the desert is cool and hip now, but back in the day it sucked. It was horrible. It was hot and boring and there was nothing to do. It was a wasteland.”

By the mid-1990s Kyuss had built up a considerable head of steam. After a couple of studio mis-steps they had released their finest album, 1992’s Blues For The Red Sun, a masterpiece of moody acid-rock that established the template of the coming stoner-rock tsunami. They toured with Metallica, received rave reviews in the rock press, and landed, through luck and circumstance, on a major label. For many bands it would be the start of a long and starry career. For Kyuss it was the beginning of the end.

The recording of the follow-up to Blues For The Red Sun, Welcome To Sky Valley, dragged on for two years, the victim of label meddling and in-fighting. By the time it was finished, founding member Brant Bjork was taking his leave. “There was just a lot of politics involved at that point,” he says, “and the band had started to disintegrate from all the business and politics and the all the stuff that’s just not fun to take responsibility for when you’re that young.”

For Kyuss, their grand rock adventure had suddenly turned into a corporate gig.

“It was. And I was 19 at the time, and that’s too young to wrap your head around that kind of scene. I bowed out.”

Meanwhile, Elektra Records were frantically trying to figure out how to market a band that simply had no peers.

“Yeah, that was a big deal,” Garcia says. “Elektra flew us out to New York, and we sat in a huge conference room and everybody ran around the table introducing themselves. We had a huge team of people. Back then the music business was a lot different than it is now. Anyway, I don’t think they knew what do with us. We got a little bit of airplay on MTV, but I don’t think they got it. They just didn’t know where to push Kyuss.”

The band limped along for another couple years, their last album, …And The Circus Leaves Town, being released in 1995. In a classic case of life imitating art, that’s exactly what this particular rock’n’roll circus did. Fatigue and frustration had set in, and within a few months of the album’s release the band was over.

“There were a lot of things that broke Kyuss up,” Garcia offers, “but I tell you, when Josh and I sat down at this bar in Palm Desert called the Red Barn, within five minutes of the conversation Josh and I had split up the band and we were already toasting to the good times we had. We were already reminiscing before we even let the cat out of the bag. It was just time.”

A funny thing happened on the way to oblivion, however. Immediately after Kyuss imploded, a vast – and still-growing – movement, dubbed ‘stoner rock’ for obvious reasons, exploded in their wake. Hundreds of bands formed seemingly overnight, many of them by ex-members of Kyuss themselves. Brant Bjork joined perpetual boogie van-sters Fu Manchu and later embarked on a solo career. John Garcia formed post-grunge contenders Unida, Josh Homme formed Queens Of The Stone Age, into which he brought another former Kyuss player, bassist Nick Oliveri.

Oliveri played with Kyuss in their desert-bound salad days. Clearly the biggest workaholic in the group, he has since already amassed an exhaustive resumé that includes stints in The Dwarves, Eagles Of Death Metal, River City Rapists and The Moistboyz, as well as recording and touring with his own band, Mondo Generator. However, he’s probably best-known for getting fired from Queens Of The Stone Age, just as they began penetrating the mainstream with their 2002 album Songs For The Deaf. The official word on why is the expected, much-cited “creative differences”.

“Everybody loves controversy,” says Oliveri. “People don’t want to hear about it when everybody’s getting along, they want to hear about things going bad. There’s always ups and downs in bands, but there’s been a lot more ups than downs, if you ask me. I just saw Josh in the studio when I was recording the last Mondo Generator record. Everything’s cool with me and Josh.”

But does Oliveri look back fondly on his time spent with Queens? “Absolutely. I’ll be honest, there was a time when I was bitter. But it’ll be eight years in February – like, February 15th. But who’s counting?” he laughs. “The important thing to know in all this is that everybody’s still good friends.”

Apart from Josh Homme (currently flying with John Paul Jones and Dave Grohl in Them Crooked Vultures), who is still vehemently against revisiting his Kyuss days, all of the players have at various times toured playing the music of their former band. And so it was last year at the Hellfest in Clisson, France.

“We were playing a festival during the day,” explains Oliveri. “Brant was with Bros, I was with Mondo Generator, and John was playing Kyuss songs at night. Brant and I got on stage and played three songs with him and it was just a blast.”

Such a blast, in fact, that they were soon talking about a full-fledged reunion. Garcia is planning on releasing his first solo album, Garcia VS. Garcia, in the autumn of 2011, and thought a Kyuss reunion tour would be the best way to promote it.

“When Brant and Nick got up to play with me at that festival in France it was a feeling I haven’t experienced in years. It made perfect sense to ask them to do this,” says Garcia.

And his former bandmates were happy to oblige.

“I think we would have jumped at the chance five years earlier if it had presented itself,” says Bjork. “Sure, the band dissolved, but that had nothing to do with art or music and those have been the same reasons we haven’t done this before. It’s always about politics and business. This is the first opportunity that presented itself to get back together and celebrate for the love of the music and the songs and to go out there and take responsibility for the legacy. It’s cool, there’s a lot of freedom to it now. It’s not run by a label, it’s not run by a corporate machine, it’s not run by a management team, it’s just family.”

The reunited band, dubbing themselves Kyuss Lives, plan on touring Europe and Australia in spring 2011, with a possible US tour to follow soon after. Josh Homme’s vacant spot will be filled by Garcia sideman Bruno Fevery.

“Yeah, he’ll be doing Josh’s parts,” reports Garcia. “Will he play like Josh? Yes, you’ll recognise the parts, but he’s got his own style, he’s going to put his own stamp on it. He’s very good and we’re very lucky to have him.”

Naturally, given this dramatic turn of events, the Kyuss faithful are hoping the band will eventually record again as well.

“Right now we have no plans to write or record again,” says Garcia. “We’re all busy with our own stuff now, but would I like to, sometime in the future? I’d love to. I’d be stupid not to want to do that. But there’s no plans for it at the moment.”

So toke up, teenage losers of all ages. Your gods of slack are coming back to town.

KYUSS CREW: WHAT ARE SOME OF THEM DOING NOW?