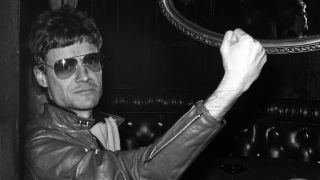 In 2005, when asked how he liked growing old, Kim Fowley replied, “I’ve been old and dead forever. I’ve always been ancient. It’s fine. It’s conceptual.” It was a typically extravagant response from Fowley, whose conceptual existence ended on January 15 when he succumbed to bladder cancer at the age of 75.

An unapologetically outspoken creation of his own boundless ego - “Basically I’m smarter, richer and more interesting than most of the people I talk to every day” - Fowley had the talent to back up his inflammatory rhetoric. His impressive legacy is a testament to a long and varied career as producer, writer, singer, Svengali, and musician. Defying a convenient label, Fowley’s own description serves readily: “I’m an idiot, but I make interesting product.” In truth he was far from an idiot, but he certainly did make interesting product.

Fowley was born in Los Angeles on July 21, 1939 to film-acting parents - his mother Shelby Payne’s credits include The Big Sleep. Before venturing into music, young Kim followed in their footsteps, appearing as an actor in movies that his mother and father appeared in. In 1960, as a member of The Hollywood Argyles, Fowley scored his first US number 1 hit with Alley Oop. Two years later he followed that up with a UK number 1 when he wrote Nut Rocker for B. Bumble and the Stingers.

By this time, Fowley’s career was already taking some unusual turns. “I was the first white employee of Motown in 1960,” he said. “I was producing black records and writing for black bands.” By 1964 he was in London working as a publicist for PJ Proby, where he also cut a couple of records with Jimmy Page. Fowley also became a recognized figure in London during the swinging sixties, and a frequent visitor to the notorious Ad Lib club where his fancy dancing caught the attention of The Beatles, who apparently would gaze on admiringly: “Yes they did. I did all the black moves.” The Beatles weren’t the only ones eyeing Fowley’s gyrations. Mick Jagger supposedly picked up on them, too. “Leon Russell is the one that suggested this. He called the dance ‘The Chicken’. He thought that Mick Jagger had gotten it from me.”

According to Fowley, in addition to admiring his dancing, the Fab Four were also fans of his music. “The Beatles allegedly covered Alley Oop and it’s sitting in Abbey Road. Ringo told me that. I said ‘how do you remember that?’ and he said, ‘I didn’t sing lead too many times, but I sang lead on our version of that’.” It wasn’t the only cover of a Fowley song yet to see the light of day: “I have a recording of Nut Rocker by Led Zeppelin, a bootleg they did one night on stage as an encore, and allegedly the Who recorded their version of it, but those records were never released.”

Back in his hometown Fowley worked with Frank Zappa, appearing on The Mothers of Invention’s 1965 debut Freak Out! Fowley was, however, a frequent visitor to England, returning in 1966: “I came back and I produced the N’ Betweens who later renamed themselves Slade and I produced the Belfast Gypsies when Them broke up. Van Morrison went his way and Them went their way and these guys were left over. Then I produced the Soft Machine. Then I also produced this group called Family, who I named.” Fowley also collaborated with Cat Stevens, writing the lyrics to Portobello Road.

In addition to writing for others, Fowley was also a recording artist in his own right, releasing more than 20 solo albums following his 1967 debut, Love is Alive and Well. One of his solo songs, The Trip, was apparently the inspiration for The Doors’ Soul Kitchen: “The Trip was on the jukebox at the London Fog where they played for nine months. Albert Goldman told me it was his opinion the song was lifted from The Trip.”

/o:pFor Fowley, the early seventies were spent hanging out with Jeff Beck in London, watching Judy Garland throw up at a Pretty Things party, taping an ode to Hawkwind’s Stacia (“I was too clean for her”) and being proposed to by Marianne Faithfull (“I had similarities to Gene Pitney, physical ones, that she found attractive”). He also found time to co-write songs for Kiss, Alice Cooper, Leon Russell, and Kris Kristofferson.

But it was the unpromising placement of an advert in the music paper Who Put the Bomp that would begin the defining chapter in Fowley’s career. He was looking to put together an all-female group. In 1975 he met the teenage Joan Jett and formed The Runaways. Their pre-punk rawness, with songs like Cherry Bomb, paved the way for a new breed of female rockers, and in so doing cemented Fowley’s reputation as a musical visionary: “I wanted another point of view beside the male point of view. It was hard to be a lady innovator in any field on the 20th century. I wanted girls to have heroes.”

Fowley with Robert Plant at a Runaways show in 1977.

When prompted about whether he had any regrets, Fowley said he should have been meaner, that he was too trusting. But there may well be those who felt he was mean enough. His turbulent relationship with The Runaways ended acrimoniously in 1977 but, more than 30 years later, Fowley reconciled with the band’s singer Cherrie Currie. Indeed it was Currie who helped nurse Fowley through his last years, along with his longtime girlfriend Kara Wright, who he married on September 24, 2014.

Asked if he felt he got the recognition he deserved, Fowley was as forthright as ever. “No, because my persona gets in the way of my content.” In 2012 he published the first volume of his autobiography, Lord of Garbage. The title links with the line he chose when asked what he would like as his epitaph. For that, Fowley chose a lyric from the song Rock Island Line made famous by Lonnie Donnegan: “I fooled you, I’ve got pig iron.”/o:p