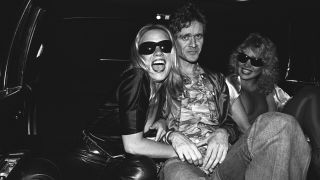 There is nothing that could be said about Kim Fowley, good or bad, that he hasn’t already said about himself. In one breath he declares, “Look at who I am. I’m an uneducated, untalented, bad-social-skills, horrible-intimacy- skills, unattractive, horrifying, dark, cadaverous, too-tall presence.” The next he states, “I‘m much more interesting than I have any right to be or you deserve to ever know about. I’m probably one of the last humans that reeks of immortality and magnificence.”

Legendary for his brash manner and scurrilous tales, anything ever written about the man should be prefaced by the opening line from Kurt Vonnegut’s Slaughterhouse-Five: ‘All this happened, more or less’. Even his good friend celebrated Los Angeles DJ Rodney Bingenheimer warns, “You can’t believe anything he says.”

At 65, Fowley has lost none of his bite. “Being a nice person in print is kind of like listening to a Karen Carpenter record: it’s nice if your grandmother’s there, but maybe it’s not something you want to wank to or have a smoke to.”

Pinning down exactly who Kim Fowley is, is a tricky task. “Greatness is an elusive item to describe,“ he humbly concedes. “No one’s quite sure what I do, because I did it in so many areas.” He rejects being called a businessman or a performer: “I’m neither one. I’m in that grey area between art and commerce.” Alternately known as a producer/ songwriter/singer/Svengali/manager/publisher/DJ/poet/chauvinist pig/egomaniac/lech, he prefers to lump all his various roles under the collective title “Sonic Cheerleader for 21st Century Rock’n’Roll”.

Best known as the man who brought the world The Runaways (Joan Jett plus the other four) in the mid-70s, his exhaustive cv includes being Alan Freed’s assistant, writing B Bumble And The Stingers’ No.1 hit Nut Rocker, being the first white employee of Motown and working as PJ Proby’s publicist. Since producing his first record, Charge by The Renegades, in 1959, Fowley has been linked to thousands of songs and hundreds of artists; he has co-written for Cat Stevens, Kiss, Van Halen, The Byrds, Mott The Hoople and Alice Cooper, and produced artists including Gene Vincent, The Belfast Gypsies (formerly Them), The N’Betweens (aka Slade), The Soft Machine and The Modern Lovers. He made his singing debut – backed by Jimmy Page and John Paul Jones – in 1964 on (Rolling Stones manager) Andrew Loog Oldham’s album 16 Hip Hits, and has since recorded several albums under his own name. He also sang on The Mothers Of Invention album Freak Out!.

If none of his achievements has elevated Fowley to the realms of stardom, then it’s certainly not for lack of trying. His passion foriself-promotion rivals that of Donald Trump. Fowley loves nothing better than to talk, and especially about his favourite subject: himself. Modesty is not a concept he’s familiar with, but he’s well aware of why he hasn’t become the legend he thinks of himself as: “Because my persona gets in the way of my content. Because I’m basically an arsehole, a piece of shit, no one’s interested in going any further to see if there’s any depth of talent, character or intellect.”

Anyone who is aware of Kim Fowley will know that he has an excess of all three of those attributes. Which in some cases has been the problem. “I’m smarter, richer and more interesting than most of the people I talk to every day. So I’m a bit of a fucking pig about that.”

Fowley’s latest venture aimed at alerting the world to his genius is his film Jukebox California – “it’s 21st century rock’n’roll in small-town USA”. Although it’s not strictly autobiographical, the degenerate schizophrenic lead character is essentially him. “I have 28 personalities and I play all of them.” He admits to having that many personas in real life, and while they don’t have different names, “they all have identities and accents and different clothes and haircuts and everything”.

The film promises to be a warped cathartic indulgence. “I admit all my diseases that I’ve suffered from. And I admit to all my flaws. It’s all there, all the confessions my friends and enemies have been waiting to hear and see.” Jukebox California also comes with a ringing endorsement from its originator. “Even I was entertained by it. It was very hard to capture me, because I’m an unpleasant, unattractive old ugly man in the middle of a Paris Hilton/Tom Cruise universe. To suddenly put Grandpa Supersonic Senior Citizen Number One up there and hold your attention for 90 minutes wasn’t easy.”

It’s interesting to note that perhaps the biggest influence Fowley has had on music came not as a result of his musical endeavours, but because he once turned down a marriage proposal from Marianne Faithfull. In 1964, when he was in London working for PJ Proby (a poor man’s Elvis, better known for his public trouser-splitting than for his records), he frequented the epicentre of London nightlife, the Ad Lib. One night the teenage Marianne Faithfull approached him – attracted by his resemblance to Gene Pitney, who had recently dumped her.

So it’s Fowley’s fault that Lennon’s dead and The Beatles split up? “No, the real reason is that I hear he was obsessed with Brigitte Bardot. When he was making a movie in France he got an introduction and they spent time together, but she was disappointing. The very next woman he spent time with when he came back to England was Yoko, and Yoko was so much more interesting for him than Brigitte.”

It’s not the only connection he has with The Beatles. The Fab Four would apparently venture to the Ad Lib just to watch the nimble-footed Fowley (“I am a great dancer”) strut his stuff. “Yes, they did. I did all the ‘black’ moves. Remember, I was the first white employee of Motown in 1960 – I knew my way around house parties, and always had black girlfriends. I was producing black records and writing for black bands. I was the white guy that would take the black music into white radio. That’s why [Motown boss] Berry Gordy hired me.”

Along with the more tenuous links to The Beatles, Fowley does have a musical association with them: “The Beatles allegedly covered Alley Oop [a 1960 hit for The Hollywood Argyles], which I co-published and co-produced, and it’s sitting in Abbey Road. Ringo told me that. I said, ‘How do you remember that?’. And he said, ‘I didn’t sing lead too many times, but I sang lead on our version of that’.”

It’s not the only recording of one of his songs to languish in a vault somewhere. “Jimi Hendrix recorded a Kim Fowley song which has yet to see the light of day. It’s called Fluffy Turkeys. I have a recording of _Nut Rocker_ by Led Zeppelin, a bootleg they did one night on stage as an encore, and allegedly The Who recorded their version of it one night. But those records were never released. That might have given me another set of anointing.” (One version of the instrumental Nut Rocker that did get released was Emerson, Lake & Palmer’s on Pictures At An Exhibition).

When asked which of his songs he’s most proud of, he picks a more recent cover. “Nirvana did a version of Do You Love Me?, which I co- wrote with Kiss.” But his obvious pride is tempered somewhat by the aside: “It didn’t get used in the latest box set reissue, so that’s too bad.”

Although Fowley states, “I’m not looking to be appreciated; I’m looking to make a living,” it’s clear that, despite all his success, the lack of recognition for his efforts bothers him. “If a member of The Doors or Nirvana walks in a room, they don’t have to explain what they do. In my case they say, ‘Who in the fuck do you think you are, arsehole?’ Then you say, ‘Do you want to fuck me, or fight me? Pick one’.”

Over the years, Fowley has done a lot of both – especially the former. The holder of both American and Irish passports, he has spent a lot of time in England, and recalls those early trips to London with salacious glee. “I went to a lot of parties and fucked a lot of women. We would have these big dinners every night and tons of people would come by – Jeff Beck, Nick Kent.” On one famous occasion he witnessed Judy Garland throwing up at a party attended by The Pretty Things and PJ Proby. “Everybody laughed and Proby said, ‘This is the queen of American showbusiness – have respect’.”

Fowley’s relationship with women has always been somewhat primal. Runaway Cherie Currie once described him as an “absolute beast”. A notorious libertine, he isn’t exactly known for his subtlety and shyness when it comes to the fairer sex. One of his favourite chat-up lines is: “Young lady, have you ever had your shit pushed back?”. How does that one go down? “I got a lot of people bending over.”

Even this blunt approach was too wholesome for Hawkwind’s anatomically blessed dancer Stacia, however. “I was too clean for her. Apparently she was into the Lemmys of this world.”

After giving Marianne Faithfull the brush-off, Fowley finally tied the knot in 1978. What ultimately convinced the 39-year-old to take the plunge was his 18-year-old fiancée turning down advances from Jackson Browne and Bruce Springsteen in the same evening. “I said, ‘Well, I owe her something for that’,” he laughs. Rather unsurprisingly, the marriage lasted a mere 52 days.

It’s with a group of woman, rather than one, that Fowley’s name will be inextricably linked. In 1975 The Runaways, featuring the teenage Joan Jett, kicked their knee-high leather boots into the balls of the male-dominated rock scene. 30 years on, Fowley reflects on the impact the group he managed and moulded have had. “Nobody had ever done that before. I wanted a bunch of girls who could play rock’n’roll. Later there were female musicians in every town and village in the world, but in 1975 there weren’t.”

Since parting company with the band in 1978, Fowley has been forlornly searching for the next Runaways. The latest hope is ROTF (Rebels Of The Flesh). “It’s post-Honey Bane, post-Germs, post-Black Sabbath.” With song titles such as Lust Ambulance and Underwater Sex Class, Fowley is convinced the UK girl group are “bound for stardom.”

As well as ROTF, Fowley is busy producing a number of other artists, though his heavy workload means that he can’t always be there in person. He’s also a DJ on Sirius satellite radio along with his old friend Andrew Loog Oldham, playing “lo-fi underdog rock’n’roll”.

Almost 50 years after hearing Whispering Bells by The Del Vikings and Jerry Lee Lewis’s High School Confidential – “Records that would make you want to drive your car right through authority, and burn down schools and set fire to yourself” – Fowley is still convinced of music’s power. “Rock’n’roll is a nuclear blast of reality in a mundane world where no one allows you to be magnificent.”

On the contrary – if that’s what happens, then thank you.

This was published in Classic Rock issue 83.