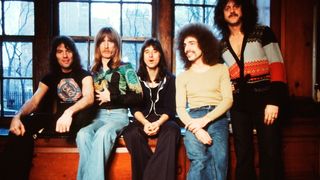 When David Chase, the producer of hit TV series The Sopranos, chose Journey’s Don’t Stop Believin’ as the soundtrack to the climactic scene in the final episode, former Journey singer Steve Perry felt deeply conflicted. A huge fan of The Sopranos, Perry admitted: “I was not excited about the possibility of the Soprano family being whacked to Don’t Stop Believin’.” But in the end Chase got what he wanted, and Perry and Journey got what they had been denied for so many years: genuine iconic status.

For all their success – more than 45 million albums sold in the US alone – Journey have always been a band that music critics have loved to hate, and pilloried as the epitome of corporate rock. Perry himself was mockingly nicknamed The Duck due to his high-register voice. But among fans of classic American melodic hard rock, Journey are revered as masters of the art.

Perry joining in 1977 elevated Journey to greatness and, indeed, saved the band’s career.

Since forming in San Francisco four years earlier, the band had recorded three albums for the Columbia label, all of which were heavily influenced by the Latino-jazz rock of Santana, the group in which both keyboard player Gregg Rolie and guitarist Neal Schon had previously played. But after all three of Journey’s records stiffed, Columbia delivered an ultimatum. As original drummer Aynsley Dunbar recalled: “We were told: ‘Get a singer, get some hit songs or you’re off the label.’”

After a brief trial with Robert Fleischman (who would later go on to front Vinnie Vincent Invasion), Journey recorded their first album with Perry, 1978’s Infinity. It promptly went platinum.

In the 80s, Journey became one of the biggest bands in America, with the Holy Trinity of AOR (Adult Oriented Rock) albums: Escape, Frontiers and Raised On Radio. But in 1987 Perry quit. Journey ended up on ice until his return in 1995.

When Perry left again two years later, Journey found a new singer in Steve Augeri. But in 2006 Augeri suffered problems with his voice and was replaced by Jeff Scott Soto for a world tour.

Incredibly, the band discovered their latest singer via YouTube. Filipino Arnel Pineda’s performance of Journey songs in covers band The Zoo was enough to secure him his dream job. Pineda sounds uncannily like Perry on the Journey’s single Never Walk Away. But as the band and their fans know only too well, there is only one voice of Journey. And that, of course, is The Duck.

The greatest AOR album of all time, Journey’s first US No.1 made them stadium-filling superstars.

And pivotal to its success was their new keyboard player: Jonathan Cain co-wrote every song on Escape. “What changed about Journey,” Cain said, “is that I started writing about the people that cared about the band.” Don’t Stop Believin’, an evocative tale of ‘streetlight people, living just to find emotion’, became an American classic. Open Arms – rejected by his previous band The Babys – was a monster hit.

With Steve Perry heartbroken by his mother’s terminal illness, and bassist Ross Valory and drummer Steve Smith leaving due to “creative differences”, 1985 was Journey’s annus horribilis. But out of turmoil came the last classic Journey album.

Raised On Radio was recorded three times before Perry was satisfied. But every nickel and dime they spent is audible in the deluxe soft rock of Girl Can’t Help It and I’ll Be Alright Without You.

SUPERIOR - THE ONES THAT HELPED CEMENT THEIR REPUTATION

With Frontiers Journey hit another home run. The album reached No.2 in the US and included two classic hits: Separate Ways (Worlds Apart), one of the heaviest and most emotive tracks the band have ever recorded, and Faithfully, the greatest power ballad of all time.

Journey never rocked harder than on Frontiers, with Neal Schon really ripping on Edge Of The Blade and Rubicon. The album would have been even better if Ask The Lonely and Only The Young, two brilliant tracks, hadn’t been dropped in favour of Troubled Child and Back Talk the latter a real stinker. (The two discarded songs appeared on the album’s 2006 reissue.)

Steve Perry was not a unanimous choice as Journey’s new singer. But when Perry presented the bluesy Lights to the band, everyone sensed the possibilities.

Tellingly, Lights was chosen as Infinity’s opening track – an introduction to the new Journey – and it remains one of the band’s best-loved songs, as does this album’s Wheel In The Sky.

As the 70s became the 80s, Journey still sounded, and looked, somewhat dated. Van Halen’s Women And Children First was released in the same month as Departure – March 1980. But where VH sounded like the future, with the image to match. Journey were stuck in the 70s.

But no matter, a great song will always hit the spot, however old-fashioned the delivery. And there are many on Departure, including the jubilant Any Way You Want It.

Departure was aptly titled. With Gregg Rolie set to quit, this was the last hurrah of the old Journey. Within a year the flares were gone and Journey were setting the template for 80s arena rock.

The dreaded solo album signals the end for many a band. Steve Perry returned to Journey after making Street Talk, but the balance of power had shifted; Perry would remodel Journey’s music on this album’s soul-influenced soft rock.

Street Talk sold a million copies. But Perry’s second solo album, For The Love Of Strange Medicine (1994), was nowhere near as good.

Steve Perry’s pain was Journey’s gain. The band’s first Top 20 single, Lovin’, Touchin’, Squeezin’, was written after the singer saw his girlfriend kissing another guy. Perry described the song as “love justice”, but it was the sweetest kind of revenge; with its slinky blues groove and a killer ‘na-na-na’ coda, the song became a genuine rock standard.

New Yorker Steve Augeri seemed to be the perfect replacement for Steve Perry, his voice being a natural fit for Journey.

Sadly that voice failed him. In 2006, after eight years and two albums with the band, Augeri left Journey amid rumours that he had lip-synced on stage. He was later diagnosed with a serious throat infection. His exit may have been ignominious, but his contribution to Journey’s legacy should not be underestimated.

Augeri’s debut on Arrival was heroic, his performances on the classy ballads All The Way and Loved By You measuring up to Perry’s superhuman standards.

The second coming of Steve Perry was hailed as a miracle by AOR worshippers, but it ended in disappointment.

With the definitive Escape-era line-up reunited, Journey should have delivered a great album. They managed only half a great album.

On opener Message Of Love and the ready-made wedding song When You Love A Woman, Journey achieved something close to peak form. But the big rock epics, Castles Burning and Can’t Tame The Lion, were all bluster.

Trial By Fire hit No.3 in the US, but the band’s comeback tour was aborted after Perry injured his hip in a hiking accident. Tragically, he never sang for Journey again.

LOOK INTO THE FUTURE

In the credits on 1979’s Evolution, Journey stated, gratefully: “Columbia Records stands alone in the field of developing new artists.” The company’s ‘tough love’ approach certainly worked for Journey, who couldn’t buy a hit record until Columbia ordered them to find a proper singer and write some tunes.

Greg Rolie was a great keyboard player but a very average singer. And the sub-Santana noodling on Journey’s first three albums was terribly self-indulgent. The worst of the three, Look Into The Future is the sound of a band showing off their muso chops and playing only for themselves.