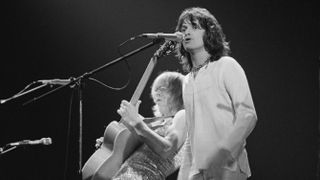 A founder member of prog-rock grandees Yes, vocalist Jon Anderson’s unique alto-tenor voice has been heard on albums such as Fragile, Close To The Edge and 90125. In 2008, though, Anderson fell victim to Yes’s notorious revolving-door policy. When the singer was hospitalised after an asthma attack, Yes’s co-founder/bassist Chris Squire replaced him for an upcoming tour with unknown Canadian singer Benoit David. In 2012, Squire replaced David with American Jon Davison.

Now fighting fit, Jon Anderson is planning a solo tour of South American and a rare one-off show in London, performing with a Slovakian chamber orchestra (“We’ll be doing some classic Yes songs – things like And You And I and Starship Trooper”). The Lancashire-born singer, now a California resident, is also a long-time environmentalist, pacifist and practitioner of meditation; a coping mechanism, perhaps, for the rigours of life in and out of Yes. “We must all learn to live in peace,” he proclaims, “and learn the beauty of this mystery world we live in.”

How did you come to be playing with a Slovakian chamber orchestra?

I did a concert a couple of years ago in Slovakia to celebrate the 20th anniversary of Russia leaving the country. A couple of the people putting on the show were big Yes fans, and the dream they had when they were under Communist rule was that one day Yes would play there. So I went and played. And now they’ve asked if I would sing with their chamber orchestra in London.

You’ve always been ecologically aware – Yes released the single Don’t Kill The Whale way back in 1978. Have we learned anything since then?

Things have moved on. Most of us are a lot more connected to Mother Earth than we were in the 70s.

How many times a day do you meditate?

Two, sometimes three times. It’s become second nature to me to just be in that place of calmness.

That I’m not a regular person. I am. When Yes started playing to 20,000 people, I started to get recognised a little more, but I would still wander through the audience before a show. People won’t notice you if you don’t want to be noticed.

I was always organising the football teams at lunch break. But I was always getting into trouble for messing around and singing too loud. At nine or 10 years old, I remember being told: “Anderson! Stop that singing!”

What job would you have had if you hadn’t become a singer?

I wanted to be a soccer player. I wanted to play for Accrington Stanley. I was their ball-boy and mascot for a year.

What are the best and worst drugs you’ve ever taken?

The best drugs are the ones that keep you healthy, and which I have been taking for the last 10 years: good vitamins, good supplements. The worst is cocaine. That’s always been bad for everybody. I did it once and didn’t like it.

So where do you stand on booze?

Alcohol’s not much better. A nice glass or two of wine is okay.

What’s the best Yes album to play to someone who doesn’t like Yes?

Probably Fragile. It gives you the scope of what we did – the larger pieces of music and the individual song ideas. I think it’s an incredible album. And Talk is pretty good.

I saw Alan [White, drummer] only the other day. He’s sweet. But they get on with their lives, I get on with mine. There’s no point pretending we’re all mates.

Can you imagine playing with Yes again?

Sure. Something could happen. Like Chris [Squire] keeps saying: “The door isn’t closed.” I say the same.

Does it feel strange seeing another man singing your songs?

Well, there are a few other bands who’ve got different singers in, but it still feels wrong. With Yes, they should tell people who’s in the band. That would help. When they tour around the world, a lot of people still expect to see me, Rick [Wakeman, ex-keyboard player], whoever.

Right in the middle of the Tales From Topographic Oceans tour [1973-4]. Some people in the band were very unhappy with what we were doing, some fans were unhappy. Now, though, I still look back and think, “Thank God we had the chance to play that music.”

Right now I’m really healthy, happy and in love. What else is there?

For more on Jon Anderson, Yes and how 90125 saved Prog, then click on the link below.