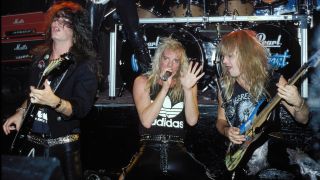 When Jani Lane checked into the Woodland Hills, California Comfort Inn in August 2011, he was not alone – he was accompanied by the demons that haunted his life, often causing him public and private humiliation.

He was ashamed of his afflictions, and would allegedly hide out in nightly lodgings, sometimes eluding his problems, other times indulging them. Ultimately, the demons got the best of him.

Only 47 years old, Jani Lane was found dead on August 11 the same year, leaving behind him a wife, two daughters and two step-daughters. His death came as a shock to the rock community, though to some it wasn’t entirely a surprise. “He’d been [falling off the wagon] for years,” says Sharon Chambers, Lane’s business manager. “Anybody that knows him knows this is nothing new. You’d wonder if you’re gonna get that phone call.”

Despite the foreboding, Sharon doesn’t believe that Jani was a man intent on real self- destruction: “He went to motels to sober up.I spoke to him the Tuesday before. He was in pretty good spirits. He had things he wanted to do. Unfortunately, drinking always got in the way. We wanted to get him back on track. He wasn’t just a client, he was family.”

The once-bright future of the former 80s rock star began to dim in the 90s when the pop-metal anthems of his platinum-selling group Warrant were eclipsed by the likes of grunge. Lacklustre sales, label troubles and unpredictable line-up changes plagued the band in the 90s, culminating in Lane’s eventual departure.

As an LA-based rock writer, I met Jani several times and gained some insight into his gentle yet tormented character. When he joined the Bad Boys of Metal tour in 2004, he was not able to make it beyond three shows, leaving his co-headliners, the equally troubled Steven Adler and the late Kevin DuBrow, to continue without him. At the time, I was working with Adler, acting as publicist and running his website. Prior to hitting the stage for the tour’s first show in San Diego, Jani spoke to me, “Hey, man, I just wanted to ask: is it okay to party around Steven? I don’t know how he’s been doing. Has he been okay?”. In hindsight, my response was ignorant: “Steven’s a grown-up, he makes his own decisions. Do what you want.” It soon became clear that Steven wasn’t necessarily the one to worry about. After barely making it through his intoxicated performances, Jani abruptly left the tour days later.

Oddly enough, many of Jani’s problems seemed to stem from his greatest success. He felt regret over his belief that, despite his integrity as a songwriter, he would only be remembered for one song, the enormously successful 80s anthem, Cherry Pie, which he downplayed as “a gimmick”. In a VH1 interview he shared his disdain for being known as the “Cherry Pie guy” stating, “I could shoot myself in the fucking head for writing that song” It is an unfortunate truth that when one reveals vulnerability, it invites insensitivity. Throughout a 2007 interview I did with the 80s metal parodists Steel Panther, they repeatedly asked their manager whether or not a person they referred to as “Cherry Pie guy” would arrive. I assumed it was a nickname for a friend, but it was, in fact, Jani Lane. He did show up, and not only did he sing the first Warrant single, Down Boys, onstage with them, he also performed that hit he so hated: Cherry Pie rocked the capacity crowd and Jani was in good spirits. He was drinking this night, and after I ushered him to the VIP room of the magazine I was representing, we drank cocktails. He never lost his composure and remained the nice guy free of pretence I’d grown to admire.

Still, he continued to endure personal jabs. A recurring bloated appearance made him the blunt of brutal jokes and criticism via “fan” comments on websites such as Metal Sludge and Blabbermouth, which relentlessly bashed him, often for “letting himself go”. Sadly, he may have taken such malice to heart. Possibly in an effort to diffuse such scrutiny, he agreed to appear on VH1’s reality series Celebrity Fit Club and successfully completed the fitness regimen. Shortly after the show, I noted the irony when we found ourselves at the same table at the Rainbow Bar And Grill on a busy Saturday night, and I suggested ordering one of their famously decadent pizzas, to the disinterest of our mutual friends. It was only Jani who said, “I’ll split a pizza with ya!”.

He still struggled in the subsequent years, often dropping out of sight for months at a time. By 2008, however, things were looking up. He rejoined the classic Warrant line-up. But after a sporadic run of shows, Jani’s lack of sobriety again began to cause problems. Six months after the initial reunion, Warrant announced that they’d continue without him. Bad news persisted when, in June 2009, he was arrested for driving under the influence, earning him a sentence of three years’ probation. Then in May 2010, he received another DUI. This resulted in a three-year suspension of his driver’s licence and a 30-month alcohol-education programme.

Shortly after, Jani surprised everyone by re-emerging to front the band Great White for a brief stint. Though there were rumours of internal problems and missed shows, Great White guitarist Mark Kendall says: “Jani was a complete professional. He was never late, and the fans were saying he hadn’t looked or sounded so good in 20 years. I have to agree.”

Despite success with Great White, in early 2011 he cryptically cancelled all dates of an announced solo tour, and again seemed to disappear. He had allegedly been frequenting LA area hotels in the weeks before he died. In vintage rockstar style, he trashed one room so badly it resulted in a banning.

Speculation swarmed as to the cause of death. Lane was found with a note on him that read, “I am Jani Lane” and a phone number. Police later revealed that friends often left such notes on Lane, who didn’t carry formal identification, in case someone found him unconscious.

Though there were pills and a half bottle of vodka found at the scene, preliminary autopsy results were “inconclusive”. As we write this, no further information has been released, and he has since been cremated (it was subsequently confirmed as being from alcohol poisoning). Sharon Chambers offers her insight, “Maybe he was tired of fighting, his body had enough, or he didn’t have the will. I believe he was on prescription meds, but it was nothing nefarious. I know others in this industry are rethinking their behaviour after this.”

Mark Kendall echoes certain sentiments: “Jani wanted to be a sober man. Besides the working relationship, we had something else in common: we are both alcoholics. We were good friends, and I tried to encourage him to stay sober. Sometimes addiction becomes overpowering and we make the wrong choices. I loved Jani Lane the person. I hated his addiction – and so did he.”

For more bands spawned on the Sunset Strip, then click on the link below.

Whatever Happened To The Stars Of The Decline Of Western Civilization Pt 2?