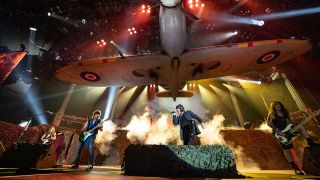 Roll up, roll up! Come one, come all, to the greatest show on Earth – the mighty Iron Maiden!

If a ringmaster were standing on a soapbox outside Birmingham’s Genting arena, you wouldn’t bat an eyelid. The heavy metal circus is in town, and it's a show stacked with thrills, spills and undead soldiers. It’s also much more than your average night out. In fact, it’s not much like a gig at all. It’s an experience that no artist can match. It's pure theatre.

The minute you enter until the minute you leave, it’s like entering another world. It's a world that goes further than music, and a world in which millions of people play a bit part, supporting roles to the six men who make the magic happen.

Over 10,000 of these extras have made the pilgrimage to Birmingham’s Genting arena, with the entrance lobby akin to London's West End at Christmas. You're greeted by Trooper banners hanging off balconies, and a pop-up Trooper stall has been erected (complete with Eddie handpumps), allowing dedicated Maiden fans to get the full sensory experience – this is the official Taste of Metal™.

The floor teems with bodies, all queueing for beer or merchandise, adding more shirts to ever-growing collections. At least 75% of the crowd are clad in official Iron Maiden swag, adding to the immersive aspect to the show: everywhere you look you see Eddie’s sneering face staring straight back at you. There is no escape.

Inside the arena itself, thousands of half-cut Maidenheads eagerly await their heroes. It starts as two soldiers arrive onstage to reveal the military motif of the set: we’re shown Winston Churchill’s iconic ‘on the beaches’ speech, and the band finally enter like rats escaping a trap, launching into Aces High. It’s like the start of a musical instead of a rock show, something Bruce alludes to in his brief banter with the crowd. He acknowledges that he won’t be chatting much tonight, instead letting the music tell the story.

A Spitfire soars overhead. Trooper Eddie starts a swordfight. Bruce dicks around with flamethrowers. A giant beast rises from the back of the stage. And there’s fire. Lots of fire. Someone-better-call-the-fire-brigade amounts of fire. The scenery moves from war zone to cathedral, gliding from act one to act two seamlessly. Each song has its own backdrop, from a Braveheart Eddie for Clansman to a hellish scene of burning churches for Sign Of The Cross. Bruce sings from a prison cell for Hallowed Be Thy Name. It's theatre 101.

The band have their signature outfits too: Bruce goes through a series of costume changes (from religious robes to a WW2 pilot), Steve has his cargo shorts, Adrian his bandana and Janick some inexplicably tight trousers and bright white trainers. These aren’t six guys turning up in t-shirts and jeans. Just as Beyonce’s costume changes are perfectly orchestrated, Iron Maiden have an image to maintain. It's why the tour's called the Legacy Of The Beast.

Sure, there are other arena-dominating bands out there. Kiss. AC/DC. Rammstein. But none of them have the scope or the vision of Iron Maiden. The 360º, full-throttle inclusion of everything you see, touch, hear, and taste – it’s all for you, it’s all for heavy metal.

In fact, it’s bigger than heavy metal. They're building a veritable dreamland in a different city every night, where Eddie is a celebrity, Steve Harris a King, Trooper flows, and everyone is either drunk or delirious. The band, all now in their 60s - Bruce celebrates his 60th birthday onstage with a Nicko-led singalong - are still galloping hard, running around like men a third of their age, beaming with glee as the Birmingham legions belt out The Wicker Man like it’s the first time all over again.

Just as Cirque Du Soleil gets bigger, bolder and more extravagant with every new production, the Maiden spectacle evolves, yet still gives everyone precisely what they want. Nobody buys tickets to Cirque expecting a pie eating contest, just as nobody watching Maiden wants anything to be wildly different from the previous 100 shows. And, just like Cirque, it's an exercise in fearsomely-drilled choreography. The setlist hasn’t changed since the first night of the Legacy Of The Beast tour, and the whole thing runs like clockwork, with every cymbal crash and ‘Scream for me Birmingham’ pinned down to the second.

There are people here who've seen this show more than once, yet they come back, wanting more, craving an experience they can’t get anywhere else. And next time out there'll be more firepower, a bit more finesse, and more money spent on production... but the cast of characters will remain the same.

Maiden aren’t calling it a day any time soon. Steve has said he wants to make another album. But we’re never going to see their likes again. Their ambition, their commitment, and their vision are far broader and deeper than anyone you care to mention. And when the final instalment of the Iron Maiden saga presents itself, we’ll be there again, wearing the outfits, drinking the drinks, singing the songs.

It’s our role in the play, after all.

You can read the full story behind Iron Maiden's Legacy Of The Beast tour in the new issue of Metal Hammer, including exclusive interviews with the band. There are also limited-edition bundles available including a Pharaoh Eddie patch and Eddie figurine.