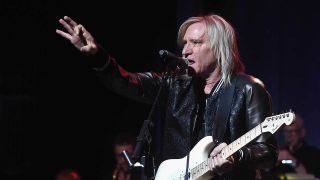 Like a rock King Canute, Joe Walsh is attempting to hold back the waves of 21st-century technological progress. “I’m an analogue man,” declares the Eagles guitarist, neatly referencing the title of his new album, Analog Man. “When I started on the album I listened to what was out there to see if I could fit in and it kinda scared me. So I thought: ‘You know what? You’re better off doing another Joe Walsh album than trying to be something else.’”

His first solo record since 1992’s Songs For A Dying Planet, it marks the end of two decades of what Walsh calls “semi-retirement”. But, given that he recorded and toured with the reunited Eagles, kicked both booze and substances, and married Ringo Starr’s sister-in-law during that time, calling it a “retirement” of any sort is a bit of stretch.

Why has it taken you 20 years to make a new solo album?

Two reasons. One is that I’ve been a full-time Eagle – in the last 10 years we’ve been around the world twice. The other reason is that I got sober in 1994 and I had to take time out to learn how to live. I discovered this whole new life in sobriety, and I wanted to go and check it out. Also, going into the studio still had some triggers – I’d get frustrated trying to write some stuff and my mind would say: “Well, you know what would work…”, and that wasn’t an option.

Where do you fit in the musical landscape in 2012?

I guess I’m a senior member of the rock’n’roll community I’m trying to represent. I don’t hear that much out there in terms of rock’n’roll albums, so I’ve decided that’s what I should do.

Well, yeah. It’s a digital age, there are no record companies. We’ve all had to make some adjustments and I’ve got to keep up with it. I’m just commenting on the fact that there are two worlds. There’s the one that I’ve always written about, which is reality on earth, and then there’s this whole other place, a computer-created illusion. People get on the internet playing these games and they’re in there for days. Meanwhile, reality goes on. And I’m just trying to write about it.

Being inducted into the Rock And Roll Hall Of Fame was good for my ego, but I don’t know how much it really means. I think having been a part of the making of Hotel California and then having it succeed beyond any of our wildest dreams, that was truly a high point.

What about the worst bit?

The low point was probably my last three years of vodka and substance abuse. I was pretty pitiful. I had lost myself. I always thought: “Well, if I need to, I can stop.” And then I realised that wasn’t the case, and I did not know what to do. That was pretty awful and I don’t want to go there again. There’s life after that and it’s good. There’s a notion that sobriety can kill your mojo.

Do you think there’s a link between creativity and excess?

I do. Could Hendrix have played like that sober, straight and without acid? I don’t think so. Could Hemingway and Faulkner have written like that unless they were alcoholics? Probably not. I always used that as a crutch in my denial – that artists should experience all extremes. But it never occurred to me that all those people are dead. Being a rock’n’roller and partying was part of the times back then. I took it as far as I could go and it almost killed me.

Is it true that on your first visit to England you were chaperoned by Keith Moon?

Oh yeah. The James Gang were opening up for The Who when they premiered Tommy in Europe, and Keith Moon decided that he liked me and that we should stay up for the entire tour. He taught me the basics of hotel damage, blowing stuff up and anarchic chaos in general. He was my mentor. And of course I embellished it later with things like chainsaws. You took a chainsaw on the road? Yeah. But I found that you didn’t have to really use it that much. Walking up to the front desk with one usually got a lot accomplished.

You actually ran for President in 1980. What are your feelings about the way the 2012 US elections are shaping up?

There’s a lot of stuff wrong and a lot of stuff broken. I was watching the debates and I was pretty sure that I could get elected if I just didn’tsay anything. These guys are putting their foot in their mouths with every third thing they say. It’s hilarious but it’s also scary. I don’t know why anybody in the world would want to be president, but if the whole country begged me, I’d probably consider it.

What’s happening with The Eagles?

This year marks our 40th anniversary and we’ve decided to take some time off and chill. I think we’re going to put a show together based around that theme. But that’s going to take five or six months.

If I was a young musician about to join The Eagles, what advice would you give me?

Just smile and nod ‘Yes’. They’re just real alpha guys in the band. We’ve always been strong personalities and we’re all solo artists. Some of the tension between us has been really good creatively. We don’t fight so much any more; we agree to disagree. When we’re together – and we know this – it becomes something much bigger than any of us individually. There’s something special aboutthe band and we know that.

And what advice would you give to the 15-year-old version of yourself?

Wow. Work at your craft. You can’t be a legend in your parents’ garage. You’ve got to get out and play in front of people. Even if you stink. Hang in there, pay attention to the internet, and good fuckin’ luck because it’s not easy.

This interview was originally published in Classic Rock 172.

Eagles: The Heroes Or Villains Of 70s Rock?