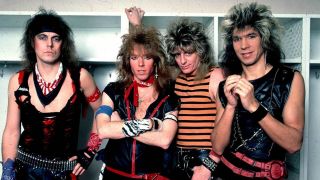 “It’s like getting back together with an ex-spouse,” George Lynch says about reuniting with Don Dokken for a clutch of Dokken shows next month. The dates, which comprise six October shows in Japan and one U.S. warm-up gig in South Dakota, will be the first time the four original members—singer Dokken, guitarist Lynch, bassist Jeff Pilson and drummer Mick Brown—have played a full show together in roughly 20 years.

Relations were notoriously strained during the band’s original run in the 80s and have continued to be ever since, in particular between Dokken, who still leads the band that bears his surname, and Lynch, currently fronting his own Lynch Mob. But the guitarist is optimistic—if cautiously so—that they will come together this time, if not exactly as friends, then certainly not as enemies. As for the possibility of continued Dokken work after the Japan gigs? “It’s pretty much a tossup,” Lynch admits.

The guitarist spoke to Classic Rock from his home in Southern California.

How do you feel about the Dokken reunion?

Well, um, it’s a mixed bag. It’s complicated. But the overarching feeling I have is I’m glad it’s happening for the right reasons. One of which is money. But another of which is putting a nice bow and closure on an important part of our professional and artistic lives, and also for people who care about this kind of music. Because it was important to their lives. And with all the bad things going around it’s nice to see that people can come together sometimes. I just think it makes people feel good. I know it’s a drop in the bucket, but, you know, I’ll take it.

Have the four of you gotten together to rehearse yet?

No. But actually, today we’re getting together to work on a song that Jeff and I wrote. We put it together about three weeks ago, over a period of a few hours. I went over there for half a day and we started from scratch and we built this thing and it ended up feeling like we were working together back in the 80s. Except we didn’t have cocaine this time. [laughs] Other than it was like a time machine. It was really fun. So we came up with this thing and sent it Don, and he dug it. We sent it to Mick, he dug it. And Don, Jeff and I are getting together today to come up with some ideas for vocals.

What can you tell us about the new song?

Well, the people I’ve played it for all love it and think it’s what they imagine or hope that a new Dokken song would be. And that’s that it’s still true to the old style and sound while also being a little more contemporary. So instead of copying something we did 25, 30 years ago verbatim, it’s obvious that it comes from the same people that wrote those songs, but at a different time. And it’ll be included on the live album.

So these Japanese shows will be recorded?

Yeah. There will be a live album and a DVD as well.

When it comes to the personalities in Dokken, people tend to focus on the dynamic between you and Don, which has over the years been rocky, to say the least. How is your relationship nowadays?

Well, you know, I’m trying to stay positive with all this so I don’t really want to get into what could go wrong with things. I would just say that we pretty much don’t have a relationship at this point. The only time we see each other is when we’re on the road and maybe Lynch Mob is playing the same bill with Dokken. Otherwise, there was an hour-long meeting at a management office and a few emails. But beyond that there really hasn’t been any communication. So there is no relationship.

When the idea to do these reunion shows came up, were you surprised? Did you feel that it was something that would happen again at some point, or was the possibility off your radar completely?

I had been campaigning for it, actually. I’ve been an advocate for some form of reunion for many years. And we’ve had a few failed attempts at it. So I’d pretty much given up on it happening until this came along, which came through a completely different avenue than anybody had expected. It was one of our ex-roadies, one of the very first drum techs we had, who has since risen up through the ranks in the music business and is really well connected. He put it together.

Assuming these shows go off without any problems, do you think we might see more activity from the original Dokken lineup in the future?

If I were betting I’d say there’s probably a 50⁄50 chance. And I’d be advocating for that, too. But it gets more complicated when you’re talking about more shows because of all our other commitments. Jeff is locked in very seriously with Foreigner. It’s not easy for him to take a couple weeks off. That’s probably our biggest restriction. But it definitely would be something that promoters and the fans would like to see. On a business level I’m sure it could be done very easily. So, you know, never say never.