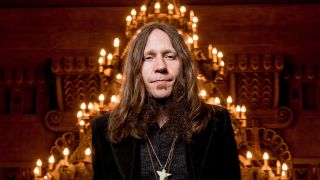 There’s more to Charlie Starr than Lynyrd Skynyrd connections, spectacular mutton chops and the most gloriously southern voice this side of 1977. Since his Baptist childhood in Lanett, Alabama, the singer/guitarist born Charles Gray has absorbed a vibrant feast of sounds including bluegrass, metal, rock’n’roll, punk and gospel. Hints of this wide range of influences are streamlined into a rich, textured southern brew on his band Blackberry Smoke’s new sixth album, Find A Light, for which Starr has written some of his most commanding, emotionally engaging material. “There’s only so many party songs you can write,” he says, “so it seems interesting to try to be a bit more complex.”

Starr quit alcohol in favour of caffeine and nicotine 11 years ago, has two children (aged four and 21) and lives in Atlanta with his wife, their vintage camper and a robust collection of guitars.

Find A Light captures complex, often quite bittersweet emotions. To what extent do the songs you write reflect your own experiences?

Sometimes you’re writing from experience and sometimes you’re playing a part. Or trying to detect how someone else might be feeling. It’s something that I’ve grown to love more than I used to, trying to be a little more complicated… Flesh And Bone, I guess you could say that’s about everyone as we get older, and you start to realise: “Jesus Christ, everything that I enjoy is bad for you.” That’s a cruel joke of the cosmos: “Why can’t I eat this, drink this, snort this?” y’know? Everything that’s good for you seems to suck. But that’s part of getting older, I guess.

Back in your partying days what were your poisons of choice?

Oh, everything. I don’t know what I was trying to escape from. I don’t really have a sob story that led me to any of that. I enjoyed it, I enjoyed being fucked up all the time. But I was just someone that wasn’t good at it and pissed everybody off all the time and was constantly apologising – or not. I just woke up one day and said: “I’m done. I can’t do this any more. I’m right at thirty and I feel fifty.” And then good things started to happen. I told my wife years ago: “When I get old, and I’m too old to get into trouble, then maybe we’ll have a glass of bourbon,” but until then I think I’ll just do my thing.

You seem like a very together guy these days. When was the last time you got into a fight or a bar brawl?

Well the last bar brawl was probably in 2001 or 2002, and I went to the hospital and got stitches. It was ugly. That was in a tiny little bar in Georgia, and it was a two-night stand. We were playing four sets a night – we were just a bar band earning our stripes at that point. It was a big, nasty fight. There was a misunderstanding on the first night, if you will, and Brit [Turner, drums] wound up jumping on this dude at the bar who was hitting on his girlfriend at the time, who’s now his wife. How did it end? That all ended up well enough – the guy was taken out. And then the next night he showed up with five or six of his friends, and they jumped on all of us. It was a bar-clearing brawl, and we got fired from the gig. I wrote a song about that whole incident on The Whippoorwill called Sleeping Dogs. A funny thing about writing songs, and poetic licence, is that you can write in the song that you won the fight… But that one was bad. We were lucky nobody got killed.

What do you have in your record collection that might surprise people?

I love the Beach Boys. My mother instilled that in me. It’s the harmony thing that’s always been very important to me musically, whether it’s the Beach Boys, bluegrass or gospel harmonies. And I love Captain Beefheart. He’s so out-there and different. His Trout Mask Replica album is extremely avant-garde, so most people would think it’s just noise. And it is. Not everyone could get away with that.

Richard [Turner, Blackberry Smoke bassist] and Brit played in a metal band, Nihilist, in the eighties. Did you go through a similarly heavy phase?

I got into very heavy stuff when I was younger. I was very into Metallica and Megadeth and Slayer. I still love that stuff. And I got into a punk phase, and The Replacements – their earlier stuff that was really rough, garage kinda music. And Bad Brains, Minor Threat and the DC hardcore stuff. I found Bad Brains’ first record, a vinyl copy, not long ago and came home and put it on. It was early in the morning and my wife was like: “What the hell are you doing?!”

The part of the world that you come from is steeped in the Bible. Where do you stand religiously these days?

I believe in God. The way you might describe God differs from person to person, but when you add organised religion, the human element, into the equation, that’s when it gets complicated. I don’t think they’ve established a denomination that I’m a hundred per cent with.

Later this year, Blackberry Smoke will be performing live with Lynyrd Skynyrd, who are playing their final shows before retiring from touring.

It seems really bittersweet, the end of the touring band Lynyrd Skynyrd. Gary Rossington is the sole surviving member of the original band, as it were. I guess maybe he’s tired of the road. And he’s had a lot of health problems over the years. I bet it’ll be an emotional time for fans and the band alike.

It’ll be quite something, Skynyrd playing Sweet Home Alabama in Alabama for the final time.

Oh yeah, that’s very powerful. They play that song at sporting events down there, and it’s incredible to hear. In America, specifically in the south, college football is massively popular. The University of Alabama are the national champions again this year, and their stadium holds about 105,000 people, and to hear that many people singing Sweet Home Alabama is something to behold.

Find A Light is out now. Blackberry Smoke tour the UK from November 2 to 17.