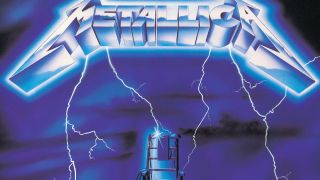 Music industry professionals refer to it as Difficult Second Album Syndrome, the condition whereby an emerging artist storms into the spotlight with their first album and then discovers that, after 18 months on tour promoting said release, they have no idea what to do for an encore. With Ride The Lightning, Metallica had no such problems.

Metallica’s second album is, indisputably, a masterpiece. In terms of songwriting, dynamics, musicianship and lyrical depth, Ride The Lightning is such a huge step on from the raw aggression of Kill ‘Em All, that it could be the work of a different band entirely. Which, in effect, it was: when Cliff Burton and Kirk Hammett joined the band on bass and lead guitar respectively, their debut album - save for Burton’s solo showcase Anaethesia (Pulling Teeth) – had already been written.

That remarkable bass solo excepted, neither man had a single songwriting credit on Kill ‘Em All: by comparison, on Ride The Lightning, Hammett is credited with co-writing four of the eight tracks, and Burton no fewer than six. The resulting uplift in quality is undeniable. But then it should also be remembered that at the time they recorded Kill ‘Em All, Metallica’s principal songwriters James Hetfield and Lars Ulrich were just nineteen years old. Read that again: nineteen years old.

The eight songs that make up Ride The Lighting were largely written in the garage of Hetfield and Ulrich’s El Cerrito home during the autumn of 1983, following the completion of Metallica’s ‘Kill ‘Em All For One’ co-headline tour with NWOBHM heroes Raven. Fight Fire With Fire and the Old Testament-inspired Creeping Death were first premiered at a gig at the Country Club in Reseda, California on November 4, 1983: the same show also saw a performance of a new instrumental track (featuring some leftover Dave Mustaine riffs) titled When Hell Freezes Over, soon to be renamed The Call of Ktulu.

Three days later, another new track was added to the quartet’s live set-list: this one bore the title Ride The Lightning. It was evident to all in attendance that Metallica were quickly out-growing the Thrash metal scene they’d helped spawn.

Further evidence of the quartet’s increasing maturity came with their decision to record their second album overseas. That call, as with almost all Metallica’s early moves, originated with Lars Ulrich, the Dane having noticed that Rainbow’s Difficult To Cure album, had been recorded in his former hometown, Copenhagen: exchange rates at the time meant that Metallica would be able to record at Sweet Silence for a fraction of the price they would pay for a similar quality studio on home turf. And so in February of 1984 the quartet decamped to the Danish capital to commit their new material to tape with local producer/recording engineer Flemming Rasmussen.

The results of this three week recording session were extraordinary. From the delicately-picked acoustic guitar arpeggios which introduced the roaring Fight Fire With Fire to the symphonic riffs which closed the epic …Ktulu, Ride The Lightning is an album of rare sophistication, ambition and power, effortlessly transcending the boundaries of what they had achieved with Kill ‘Em All one year previously.

The serrated riffs underpinning Fight Fire With Fire and Ride The Lightning might have had their origins in Thrash metal, but here they were sharper, sleeker and more incisive than anything the band had previously recorded, while For Whom The Bell Tolls was a masterclass in control and dynamics, a tale of medieval conflict made all the more dramatic and affecting by its authors’ realisation that true ‘heaviness’ could be better attained by easing up on their traditional full-tilt tempos.

This approach was made manifest even more explicitly on the album’s most controversial track, Fade To Black, a mid-tempo ballad referencing suicidal thoughts: the inevitable ‘sell-out’ accusations which accompanied its release were informed less by feelings of disappointment, than by a keenly-felt sense of betrayal. In truth, the San Francisco Bay Area ‘Trues’ who mockingly waved Kleenex tissues at the quartet when Fade To Black was first aired on home soil might have saved their opprobrium for the album’s sixth track, Escape, a badly mis-judged, painfully self-aware attempt at naked commercialism which ranks as Metallica’s only truly dishonest song: such was the band’s own hatred of the track that it wasn’t played live until 2012 when the quartet performed Ride The Lightning in its entirety for the first time at their own Orion Music Festival.

This, though, is the album’s only mis-step. More than just the sound of a group of young musicians growing into their own skin, Ride The Lightning is a fearless declaration of independence from a band who were utterly determined to forge ahead on a path of entirely their own making. Three decades on, it stands as both a blueprint and a benchmark against which all forward-thinking metal bands shall inevitably be judged. So let it be written, so let it be done…

Metallica: every song on the Black Album ranked from worst to best