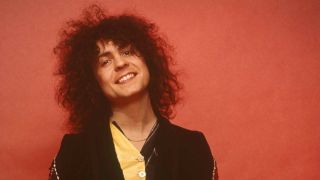 Marc Bolan did not invent glitter rock, but he most certainly perfected it. With nothing more than a mass of corkscrew hair, a battered acoustic guitar and a barefoot hippy bongo player, the elfin young Bolan transformed from a late-60s coffee house warbler into an electrified sci-fi superhero in silver spaceboots, glittered cheekbones and bright pink feather boas.

His music was pop-metal perfection; brilliant little bursts of rock flash and psychedelic poetry, the ultimate ear candy for the sex-saturated 1970s. And everybody loved him.

Bolan fever swept the UK, nearly topping Beatlemania in its froth, and T. Rex enjoyed a few years of stunning success. After a murky year or two in the mid-70s when Marc experimented with short hair, vodka and disco, he returned to the spotlight with a smashing comeback album and a punk- friendly television show in 1977, but his resurgence was short-lived. On September 16, 1977, he died in a car crash in London, two weeks before his 30th birthday.

Despite his tragic end, Bolanmania has never truly abated. There are a staggering number of T. Rex ‘hits’ compilations, reissues, remasters and junkpile collections out there to wade through, with many more on the way, Marc’s many fan clubs still do brisk business, and, most importantly, his music still rocks like crazy.

Here, then, is your definitive guide to getting it on and, if the mood hits, possibly even banging a gong.

You could not have a more fitting title than Electric Warrior. Bolan sheds his hippy skin, reinvents himself as a golden god with a gleaming, screaming electric guitar, and writes his two biggest hits in one fell swoop.

Jeepster and Get It On – pimped out for car and cola commercials for 30 years now – are virtually the only T. Rex songs many Americans have ever heard.

These two tracks often overshadow what is otherwise a stellar collection of sun-dappled narco-rockers like Planet Queen and The Motivator, as well as lighter, dreamier fare, like Monolith and the autobiographical Cosmic Dancer. This album influenced everyone back then. Still does.View Deal

At this point T. Rex were the biggest glam band of all time, and they sounded like it. The Slider is a masterpiece of blissed-out glitter rock. It’s so good that even the songs that are terrible are still great. Main Man is just one stoned riff played over and over, an obvious last-minute piece of fluff, and it’s as classic as the infectious summer anthem Rock On or the orchestral flash metal of Buick McKane.

Whereas albums that came earlier or later in the T. Rex timeline have come to sound dated over the years, The Slider is still as fresh, sexy and exciting as it was when it first jumped out of the box pouting, posing and preening back in 1972.View Deal

Much less formulaic than the string of hit singles that preceded it, Tanx represented a startling maturity in Bolan’s songwriting, revealing layers of humour and humanity never seen before.

Defiantly eclectic, Tanx was not a critical hit when it was released, but history has proven those fools wrong. It’s sublime.View Deal

Released just a few months before Bolan’s untimely death, the criminally underrated Dandy In The Underworld is a dazzling collection of vintage, back-to-basics glam rockers like the slinky Jason B. Sad, the pinballing Hang Ups and the gloriously tacky Crimson Moon.

Had he been around long enough to properly promote it, Dandy… would have been Bolan’s very own ‘68 Comeback Special, most likely propelling him right back onto his rightful throne as the boy king of all things glitter. But even touched, as it is, by tragedy, Dandy In The Underworld remains a fun, funky album, and the perfect coda to the remarkable story of T. Rex.View Deal

Recorded soon after original Tyrannosaurus Rex bongo boy Steve Took was ousted, A Beard Of Stars has only a smattering of hand-drums from his replacement, Mickey Finn.

In essence, it’s the one and only Marc Bolan solo album. Stylistically it was still in the same cross-legged cosmic folk vein of the early Tyrannosaurus Rex albums, but the songs here were layered with fuzzy acid- rock guitars and a rumbling electric bass.

On pleasantly trippy tracks like Woodland Bop and Pavilions Of The Sun it just makes for a richer, fuller sound, but on the jaw-dropping bongos/fuzz freakout Elemental Child the electric guitar shows the way for what was to come.View Deal

Pre-glam and pre-electric T. Rex, this is the best example of Bolan’s early aesthetic. Wonderfully outdated now, and making practically no sense it all, it’s like the soundtrack to Alice’s tea party with the Mad Hatter; a seemingly random series of bizarre conversations set to stripped down tangles

of clumsy acoustic guitar and clumping bongo beats. The most endearing part of it all is how earnest the young Bolan sounds while warbling clearly insane lyrics like ‘The toad road licked my wheels like a saber’ and ‘Daubed in doom in his tongue tombed room’.

In ‘75, T. Rex were floundering. The steady stream of singles had dried up, and 1974’s disastrous pseudo-concept album Zinc Alloy… sank like a stone. So the band sensibly played it straight on Zip Gun, with a sampler of simple, gooey glam rock pleasures sprinkled liberally with the more florid, danceable elements of the burgeoning disco movement.

The vintage feather boa stuff, like Light Of Love, the ballsy Space Boss, the shamelessly throwaway Think Zinc and even the Motown-fueled Token Of My Love, are all great. The disco-tinged junk, on the other hand, is deplorable. Once heard, the horrors of The Girl In The Thunderbolt Suit cannot be erased from your mind.View Deal

On the one hand, it is quite obvious that by 1976 Marc Bolan had completely lost touch with what was going on in rock’n’roll. This was not a man who could have predicted punk rock. His music had become bloated and weird, full of superfluous orchestration and over-reaching genre- bending. He had gone quite mad, and much of Futuristic Dragon makes that glaringly apparent.

On the other hand, he was still Marc fuckin’ Bolan, which means there are still several glammy gems here, including the elastic-fantastic New York City, the funky summertime rock’n’roll of All Alone, and the groovy Jupiter Liar.View Deal

This self-titled album came hot on the heels of their breakthrough hit Ride A White Swan. Still a guitar/bongo duo at the time, they had just shortened their name from the impossible-to-spell Tyrannosaurus Rex and had switched to an electric guitar – two moves which alienated the sandal wearers that had gotten them this far.

They more than made up for the loss with the success of this one. Musically it’s the stop-gap between the flower-sniffing folk of their early days and the stack-heel strut of Electric Warrior, a warm and pleasant collection of electric pop songs like the elfin One Inch Rock and Beltane Walk. Not terribly rock’n’roll, but quite charming.View Deal