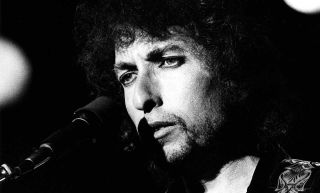 The legendary Bob Dylan may be a divisive character in the world of rock, but surely one thing we can all agree on is that the whole concept of album-oriented music – that is, collections of songs that deliberately attempt to say more than merely ‘I love you/you love me’, the mainstay of pop singles from time immemorial – would simply not have developed as it did without Bob Dylan.

From his bold attempt to raise pop lyrics to the level of poetry came The Beatles’ own decision to leave behind ‘She loves you, yeah, yeah, yeah’ and instead sing about such things as semolina pilchards, and skies full of women named Lucy.

And from The Beatles came... well, everybody else, including, yes, Deep Purple. Indeed, the whole evolution of electric guitar-driven, album-oriented music can be traced directly back to the Dylan/Beatles interface and the explosion of musical (and artistic, political and spiritual) ideas that emanated from their ground-breaking albums in the 1960s.

For without the alchemy Dylan employed to turn the base metal of old folk songs like Scarborough Fair into the shining post-war gold of newly minted ‘originals’ like Girl From The North Country there would never have been the impetus for people like Jimmy Page and Robert Plant to later write songs like Stairway To Heaven.

Born Robert Allen Zimmerman in Duluth, Minnesota, in 1941, Dylan had a voice that sounded old when he was 20; now it sounds positively decrepit. But then no one has followed quite the same, zig-zagging musical path; from folk-protest to rock visionary, to born-again bible thumper, to worryingly lost-soul, to truly reborn songsmith of jaw-dropping dexterity as, now in his late 70s, he considers the onset of his own mortality – a subject no rock artist has yet tackled head-on the way Dylan has on the albums he's made since the turn of the century.

Here, we round up the albums which have defined his career.

One of rock’s first double albums, Blonde On Blonde took the full-on electric blues Dylan had abandoned his folk guitar for the previous year to new, ever more esoteric heights. Featuring what he called “that wild mercury sound” and his most surreal lyrics yet, every one of its 14 tracks is a certifiable classic, from the stoned groove of opener Rainy Day Women #12 & 35 to the stunned post- apocalyptic love story that is closing track, Sad Eyed Lady Of The Lowlands. It also marked the end of an era, followed as it was by the near-fatal motorcycle accident that sent Dylan into semi-permanent exile. He survived, but the “wild mercury sound” didn’t. View Deal

Dylan had returned from his motorcycle accident a changed man – married, with small children. He released a string of albums whose only consistent theme seemed to be their determination to get as far away as possible from the kind of vividly cartwheeling imagery that, during his peak years, had left him labelled the ‘spokesman for his generation’.

Ostensibly a collection of love songs, Blood On The Tracks continued that trend, but to far more profound effect, with acoustic-based tracks like Tangled Up In Blue and Shelter From The Storm heralding a new, more mature Dylan, as John Lennon put it, “several years ahead of the rest of us – again.” View Deal

While his debut, Bob Dylan, had included just two originals, this, his second album, contained only two covers, and became his big breakthrough (and his first UK No.1).

From opener Blowin’ In The Wind to Girl From The North Country, Masters Of War, A Hard Rain’s A-Gonna Fall and Don’t Think Twice, It’s All Right – to name just the most famous – this album was where Dylan established his reputation as a songwriter of supreme importance. Backed only by his own spidery acoustic guitar and wheezing harmonica, that Freewheelin’... still sounds so remarkably fresh almost a half- century later says it all. View Deal

With the seven tracks that comprised the original vinyl LP’s side one featuring his first electric backing band, this was where Dylan bade farewell to his folk- protest roots, thereby alienating great swathes of his original audience. Even the four acoustic songs – including the classic It’s All Over Now, Baby Blue – on side two were considered too lyrically ‘abstract’ by folk purists.

Fortunately, the same rock audience that was about to make The Byrds’ amped-up version of this album’s Mr Tambourine Man a worldwide hit were more sympathetic. Other tracks, like Subterranean Homesick Blues and Love Minus Zero/No Limit proved that ‘innovation’ was Dylan’s new watchword. View Deal

The first Dylan album to be recorded entirely with an electric band, Highway 61 Revisited was brutally uncompromising. From the withering put-downs of savage opener Like A Rolling Stone (which gave him his first major hit single in his own right)

and the ice-cold Ballad Of A Thin Man, to the devastatingly bitter (and, at 12 minutes-plus, remarkably lengthy) closer Desolation Row, the sixth Dylan album was, in retrospect, the epitome of his ‘angry young man’ period. It also found him extolling a wickedly dark sense of humour, as on the title track: ‘God said to Abraham, “Kill me a son”/Abe said, “Man, you must be putting me on...”’ View Deal

The follow-up to the magnificent Blood On The Tracks, Desire had a lot to live up to – and almost managed it, too. With much of it co-written by Jacques Levy, however, it was bound to be a far less personal Dylan album, and therefore was not quite in the same league as its illustrious predecessor.

Tremendous opener Hurricane (about the wrongful imprisonment of boxer Ruben ‘Hurricane’ Carter) harked back to Dylan’s protest days, while the lyrically opaque Isis was redolent of the more enigmatic lyrical excursions of Dylan’s “wild mercury” days. Only closer Sara – a heartfelt paean to the ups and downs of his marriage to wife Sara – truly spoke from the heart. View Deal

The comeback album after the 18-month hiatus that followed his motorcycle accident, John Wesley Harding represented a new watershed in Dylan’s recording career. While musically it marked a return to his acoustic roots, its lyrics had a new, quasi-religious flavour that baffled as many as it entranced.

Its cover also pictured Dylan in new, sober mode, sporting plain ‘country clothes’, as opposed to the dishevelled, Chaplin-esque figure of before. In keeping with this new austere image, no singles were from the album were released, although an electrifying (in the literal as well as metaphorical sense) cover of All Along The Watchtower was later a huge hit for Jimi Hendrix. View Deal

Dylan’s recording career went into unexpected decline throughout the 1980s and early 90s, with only occasional highlights emerging from a general fug of woe-begotten albums, sparked by his ‘born again Christian’ period.

Time Out Of Mind, his first album of original material for seven years, changed all that. Featuring a lyrical preoccupation with death – particularly on Not Dark Yet and Highlands – that prefigured his own brush with mortality just weeks after the album’s completion, when he was hospitalised with a life- threatening heart condition, this is a sometimes harrowing, yet ultimately uplifting portrait of the artist as an older, wiser dog. View Deal

The third Dylan album was his first to feature only original songs. Still at the height of his protest phase, subjects under consideration included racism (Ballad Of Hollis Brown), hypocrisy of war (With God On Our Side) and the one-eyed rules of politics (Only A Pawn In Their Game). And of course, the title track itself, still one of Dylan’s most famous songs, capturing the spiritual and social upheavals of the 1960s, and the thematic follow-up to Blowin’ In The Wind. One Too Many Mornings and Spanish Boots... added some much needed beauty: if there a criticism it was that the album was so dour,
a problem Dylan would soon address by going electric. View Deal