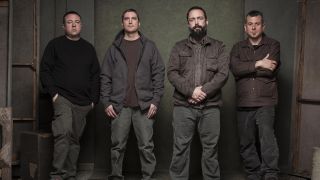 Elephant-riding super stoners Clutch burst forth from the unlikely dope-rock stronghold of Germantown, Maryland in 1991.

Initially a harder edge furnace blast of vibrating punk fury, over they years they’ve tempered their sound into monolithic waves of concrete-thick grooves, laced with intricate and sometimes baffling wordplay. In the past two decades, they’ve released nine albums on nine different record labels, weathered a hit single-driven surge in popularity, toured relentlessly all over the world, and developed an unshakably loyal fan base that may rival Deadheads in dedication, if not numbers.

“Sometimes ‘cult’ can be a nice way of saying ‘Not quite as popular as other bands’,” laughs Clutch frontman Neil Fallon, when discussing his band’s unique niche. “But in this respect, it’s a more genuine fan base. Our fans are such a mishmash of different folks from different walks of life that it’s obvious they’re fans of the band’s music, and not just a couple songs.”

That much is for certain. In many respects, Clutch is the quintessential cult act, the awesome-band-only-the-really-cool-kids know about.

“I think a lot of our fans are also fans of classic rock, especially some of the more obscure stuff. To pick a random example, a band like the Groundhogs, who have always been below the radar. I think that’s a big appeal of it.”

The Groundhogs, along with several other early 70s underground oddities like Sir Lord Baltimore and Captain Beyond, are often cited as the granddaddies of the ‘stoner rock’ scene, a mid-90s explosion of retro-fied ‘Gasm Rock signified by thick ropey riffs and headbanging, narcotic grooves.

The modern-day stoner-rock movement has two bands to thank for all the fuzzy memories: Kyuss, and the myriad offshoots (Fu Manchu, Unida, Queens of the Stone Age), and Clutch, who brought dope-rock to the seething masses of metal-kids via their ripped- to-the-tits breakthrough, 2001’s Pure Rock Fury.

Although Clutch still shares a lot of musical ground with the weed-metal crowd, Fallon says that Clutch would still rather roll their own. After all, there were just as many people tagging them as nu-metal pioneers.

“It was something for the press to talk about, a new adjective to throw around. That’s nothing new, it’s been going on since the 50s, and it’s going on now,” he says. “Style over substance can be very fleeting.”

Another big appeal for Clutch fans is Fallon’s complex and sometimes- troubling wordplay, which often resembles gangsta rap-lyrics as penned by a snarky astrophysicist.

Couplets like ‘Life inside the biosphere, dodecahedron fever’s here/Sporting scarlet letters of genetic imperfection, dear’ can lead a mind to strange and troubling places, but Fallon assures me that Clutch albums hold no secret messages from the other side. It’s just rock’n’roll, man.

“I think people should just roll with it, when it comes to the words,” he says. “We’ve never gone into an album saying that lyrically, this is going to be about X, Y, or Z. If anything, that can be contributed to the lyrics being written in a very short period of time. I write them all pretty quickly, so they capture a self-referential mood.”

Unfettered self-reference meets powerful blasts of dope-funk on Clutch’s latest album, Strange Cousins From The West, a particularly eclectic collection expertly spiced with Southern-rock tang, biker- metal bludgeon, and twisty grooves. With this album, we may just have the stoner-rock Steely Dan on our hands.

It’s a never-ending journey that’s lasted over 20 years now, and shows no sign of stopping.

“It’s not a bad life,” says Fallon. “You wake up with a different front yard every day. Of course, that can be a blessing or a curse, depending on where you are.”

This article was originally published in Classic Rock issue 134

Clutch: "It sucks that a band has to do wacky social media to be recognised"

The A-Z Of Clutch

The 11 best Clutch songs, as chosen by CKY