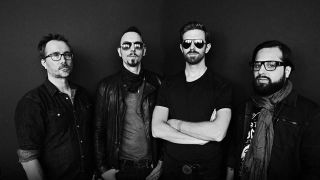 New York sure spits ’em out. The city has been a breeding ground for a thousand bands that matter. And when a green young combo by the name of Hollis Brown took the stage at Don Hill’s bar in Greenwich Village a decade ago, all five punters in attendance surely predicted great things for them.

Singer Mike Montali says that since that first show they’ve been through the rough and the smooth. But with the soul-rock R&B of third album Ozone Park they’re finally catching up with the giants in their record collection.

They were born in a garage

Rewind to 2009 and, as rock’n’roll purists, it’s fitting that Montali and guitarist Jonathan Bonilla set out in the quintessential grass-roots American rehearsal space.

“We were just kids wanting a hang out to listen to music, get stoned and play,” says the singer. “We painted this garage all different colours, put up posters of our favourite bands, record covers, magazine articles, pasted ’em everywhere to give us inspiration. We still have that primal energy. That’s something missing now, because everyone’s trying to say something cute or be witty or dress it up in some political agenda. We just want to get out there and fucking rock.”

They took their band name from Bob Dylan

If Hollis Brown sounds half-familiar, that’s because it’s lifted from the bleak suicide ballad from Bob Dylan’s The Times They Are A-Changin’.

“We couldn’t come up with any names,” sighs Montali. “Everything was terrible. Jon pulled out a Rolling Stones vinyl and said: ‘Well, they got their name from a Muddy Waters song, so let’s just pick a Stones song.’ We talked about Mother’s Little Helper, but then somebody said: ‘What about The Ballad Of Hollis Brown?’ It’s a depressing song, but he’s probably the greatest American songwriter. ”

It’s tough to salute the past without becoming a throwback, but Ozone Park walks the tightrope. From the pounding soul of Blood From A Stone to the southern rock of Bad Mistakes, these are songs in the classic tradition, retooled for modern times.

“The bands we admire most are the Allmans, Led Zeppelin, Beatles, Stones,” Montali explains. “But our goal on this record was to be the best fucking rock’n’roll band and carry the torch into 2019, instead of just making a record that sounds like 1976.”

They enjoy a double entendre

Ozone Park’s lyric sheet explores every kind of relationship, from the oat-sowing womaniser of Stubborn Man to the divorcees of Blood From A Stone. But you’ve got to read between the lines, Montali reminds us.

“Do Me Right is about my wife and how she’s always had my back, even when I’m a dick. But there’s also that innuendo that I love in songs. Like ‘You always do me right’, in a sexual way.”

They’ve suffered for their art

There have been great days in Hollis Brown, Montali reflects. Like the time they scored a record deal after performing the Velvet Underground’s Loaded album in full, or covered Walk This Way with Run-DMC. But the real measure of this line-up is their endurance for the bad things.

“Being in a band is yin and yang,” he offers. “We were headed to New Orleans and our tyre blew out. We were lucky we didn’t flip the van. We made the gig, but afterwards someone’s dog peed on our tour manager, and another guy sliced his hand completely open at two a.m. That was twenty-four hours of fucking hell!”

They have a higher calling

Like all the best bands, Hollis Brown fight like cats in a bag. But that doesn’t distract them from their higher purpose, says Montali.

“We’ve been through the fire. There’s been fights, alcohol abuse. That’s the nature of the beast. But we all realise that what we’re doing is as good or better than any fucking rock show you’re gonna see. So we keep coming back.”