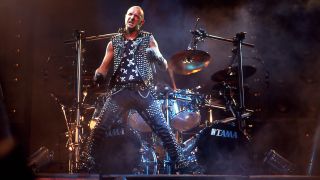 For many, Rob Halford’s high-pitched shriek is one of the defining sounds of heavy metal of a certain vintage and his leather-’n’-studs image is iconic.

Fans will also remember – and admire – him as someone brave enough to ‘come out’ as a homosexual man in a heavy metal world that is still notoriously intolerant of men whose sexuality is anything other than straight as a guitar neck. After quitting Priest in 1991 and going on to explore other avenues of music with Fight, Two and his own band Halford, he’s now happy to be back with the Brummie metal legends with whom he has enjoyed so much success.

In 2010 Judas Priest finally won a Grammy. Some think awards are superficial. Are they important to you?

Appreciation, whether from peers or the fans, is not to be sniffed at. Working as we do, in a style of music like metal, winning a Grammy is a really cool moment. It’s the equivalent of winning an Oscar. Some people attend the Brits just to get pissed, which is insulting. You should treat such events with respect.

Twelve years after ‘coming out’ on MTV, how has your life changed?

I’m far more relaxed. With all of that ammunition taken away, I don’t need to keep looking over my shoulder. I’m much stronger as a person. I know for a fact that there are gay readers of your magazine. But the sense of acceptance has been overwhelming.

Priest guitarist KK Downing once said he knew of your homosexuality “since about 1971”. How difficult was it to keep it a secret?

[Laughs] In the band everybody knew. So did my family and friends. But back then it couldn’t be addressed openly. Throughout the 70s and 80s I knew that going public would have been the wrong thing to do. Thankfully that’s all water under the bridge.

Do you believe there is a God or some kind of higher power?

The longer you live, the more those theories make sense. Look at the outpouring of love from the world after what happened in Haiti, or following the twin towers. There must more than a human connection. You can either hug a tree or read the Bible. But if you’ve got that capacity to be open-minded it’s a wonderful thing.

Do you believe in reincarnation?

Yeah, I’m coming back as a rat in sewer. That would be very heavy metal, wouldn’t it?

Was it a dark time for you during the 1990s, when you experimented with the bands Fight and Two, but couldn’t get them off the ground?

Not really. As a musician some of what you do is going to be accepted, and some rejected. But that doesn’t make [the comparative failures] any less valid. I look back at those times with affection, and I’m glad I went through them.

What’s the best piece of advice you’ve ever received?

That’s a very profound question. I’ve always been a receptive listener, but I’ve preferred to go through these past 58 years making my own mistakes and trying to learn from them.

As a working-class boy from Walsall who now lives in Arizona and also has houses in San Diego and Amsterdam, where do you stand politically?

Liberalism’s okay, but you need to maintain some kind of order. Some successful people in rock ’n’ roll say: “My heart is Labour but my money’s Tory”. That’s bullshit. I wish we could just abolish all these labels and allow common sense to prevail. I hate the class system, but I guess I’ll always be Labour.

In a Classic Rock’s interview with KK Downing in 2001 he said: “Everybody in this band categorically believes that Rob Halford should never sing with us again. He doesn’t deserve it”.

[Chuckles] That’s emotion, isn’t it? It’s passion, and that’s a wonderful thing. It was a very defining statement, it said so much about how KK was feeling. How all of us were feeling, I suppose. That’s what I love about everybody in this band – what you see is what you get.

I believe that materialism – flash cars, big houses – is a complete waste of time. If you’re looking for a serious answer, I’m not fucking Yoda, that’s for sure. But it’s important to find something that makes you content. As much as I love my down time, I feel the most complete in terms of why I’m here when I’ve a microphone in front of my face, and I’m screaming into it. That’s what I was supposed to be here for.

Here Lies The Metal God. No, actually to be truthful I’m still undecided. I’ll either be cremated – the fire things is very heavy metal – or will have one of those eco-friendly funerals, being buried in a cardboard box , decomposing and all your bits going back into the earth would be great.

For more on Halford and Priest and their best (and worst) albums, then click on the link below.

Every Judas Priest album ranked from worst to best