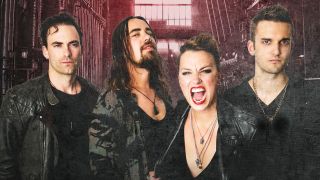 "In the end, it felt like when we started the band," says Halestorm guitarist Joe Hottinger. "Like we were back in Pennsylvania, playing bars, when we wrote songs that we knew would sound cool live. We hadn't done that in years.

"We got our mojo back. It's a rebirth. It's just very unapologetically Halestorm."

Hottinger is clearly excited by the band's new album, Vicious. If last album Into The Wild Life was both praised and damned in equal measure for veering towards a poppier sound, Vicious does what it says on the tin: it's gritty, sexy, bombastic, and packed with fire and brimstone.

"We approached this album not knowing the hell what we were doing," says Hottinger. "At the end of Into The Wild Life we wrote 10 or 12 songs, and they were good, but we weren't excited about them. We showed them to our producer Nick [Raskulinecz] and he was like, "this isn't the record we want to make with Halestorm!" And we were like, "thank god!" We agreed totally.

Vicious is out now.

"What a killer intro, eh? It sets up the record beautifully. You hear Lzzy just ripping heads off with her voice. It's amazing that she's able to do that! Lzzy wrote it with Brian Vodinm fron the band 10 Years.

"We were driving to the studio wondering what we were going to write about, and we drove by a bunch of vultures just chewing on something. We thought, 'Black Vultures! That's a good title!' Something's about to die, or they think something is about to die, and from our prospective we were thinking, 'We're not dead, motherfuckers!'"

"I record riffs on my phone. It's ground zero for all my shitty guitar playing! I always name them something so I can figure out what's what, and I was in my house upstairs with a bunch of dumb rock'n'roll skull things laying around, and I thought, 'Skulls! That will do!'

"Lzzy thought the riff was awesome and started writing melodies and lyrics. We liked the title, but how do you write a song called Skulls that isn't too cheesy? We ended up with lines about not being just another empty skull, and not being a dummy.

"There's lots of weird things happening in the world today, and it's not a political song. We don't really talk about politics too much because it's so divisive, and I don't want to be a part of that division. That division is the enemy, and that's the idea of the song: don't be divisive. I don't care what country you're in, there's a threat of evil happening, and it's trying to disrupt the peace and the way of life we all currently have."

"That came from our first writing sessions. The riff was actually kind of a joke, but Nick was like, "That riff is is cool!" and I was like, "is it?" And he was right.

"Lizzy wrote the melody and lyrics a month or two later, and just killed it. The whole vocal run over the word 'uncomfortable' is so cool and so different. Not many people can pull that run off!

"I'm so glad it was the first single, because it's part of that whole idea of challenging things. You think of Halestorm, you think of these big, radio-friendly singalongs. It's a good introduction to the record."

"We were sitting on a beach in Australia after on Australian tour. It's the only vacation with ever been on! It was a trip without instruments. Nobody could hold of us, so we ended up doing what we do, having drinks and writing songs, singing into our phones and hashing out ideas.

"Buzz have been buzzing around for a few years, so to speak, the drum loop set up the rest, and we were able to hash it out within a day or two. Lzzy finished up the lyrics and did a great job."

"I love this song. It's a head-turner for sure. Lzzy went through this phase a few years ago of sitting at the keyboard and writing these funny little songs there were like 90s electro pop. I think she was listening to Madonna's Ray Of Light all the time. She got totally into it. The songs she wrote were all cheesy and poppy, with all these crazy keyboard sounds. Not what you'd expect to hear from Lzzy at all!

"They weren't meant to be Halestorm songs, but we loved Do Not Disturb, and we wanted to make it into a rock song. We tried and failed a few times, but we bought it to Nick and he thought it could be sick! We started riffing on it, and it just came together in this slow groove. There's no swear words, but the song's so dirty, man! There should be a rating on that song. It's a trip. It makes peoples' eyes open wide, and if you can do that with music you're doing the right thing."

"We're a bit conflicted about Conflicted. It was a song A&R guy brought to us. It was half-written, and he thought we could make it cool. And we'll try anything - what's the worst that can happen?

"The song was a battle for us. We made at nine or ten different versions, and we made a big rock version which was my favourite, but that's not the one that ended up on the record. And that's OK!

"I still like what we did, it's just such a different feel, especially the way the record is sequenced. It's a kind of mellow, minimalist version of the song, and I think Lizzie finished it off beautifully. It's kinda cutesie and kinda fun, so fuck it!"

Killing Ourselves To Live

"I always envisioned this as a ballad, but at one point I thought, 'What if we just made it a heavy rock song? What would that sound like?' I made a voice memo, and we made the demo from that, and it worked out amazing.

"It goes on a journey that leads to the solo and back to the chorus. One of the goals of the record was to challenge us in our arrangements, and I'm glad it's there. Conflicted brings things down, and Killing Ourselves To Live just brings it up again."

"This was fun. It was a totally different way of approaching a song for us. Lzzy came home one night with it on piano, and finished the whole thing in an hour or two. We brought it into the studio the next day and we usually have a piano song on the record, and Nick was like, 'No way, dude! Let's make it acoustic!'

"So I picked up a guitar and just built it on the spot. I'd bought an old Moog Model D synthesiser, so that's on there too, and a day or two later the song was completed. It was a fun way to write a song, and it worked out really well."

"We did this song with Scott Stevens [songwriter whop co-wrote eight songs on Into The Wild Life]. He came to us with the idea. He had a bit of a verse and a bit of a chorus, and we just added to it and finished it up. It was really straightforward, and unlike the way we approached most of the other songs on the record. It's a straight-up riffer. I love the energy of it!"

"I'm glad White Dress and Vicious are next to each other on the record. It's a title that Lizzy has had for a while. She'd been working on this concept of not being a fairytale princess: sorry if I disappoint you if I'm being myself, but I can't be anyone else.

"I had a new guitar. I went to Imperial Vintage guitars in LA. They're the only dealers in the US for Manson guitars [made by British luthier Hugh Manson]. I'd seen Matt Bellamy from Muse play one, but I'd never played one, and I fully geeked out on this guitar. It's got a Fuzz Factory [fuzz box] in the bottom and a Sustainiac [pickup] in the top, and I was like, 'Holy Shit!' I had to get it.

"I wrote ten songs on this guitar, and this is the first one on the record that uses it. It's a great song, it's got a cool message from Lzzy, and I got to use my Manson. So I'm excited!"

"This was probably the last song we wrote for the record. When Lzzy likes a title she just starts writing. She just went off and created the whole song. She didn't even have a melody, just pages of lyrics and ideas. She wrote it with Kevin and Kane Churko [father and son producers] in Vegas, during the last writing session for the record.

"We were going to call the record something totally different, but when we came out with that title we knew that's what the record should be called.

"I had the riff already written on my Manson and we just laid everything out. Lzzy sounds amazing on it, and the scream at the end is fucking killer. It's vicious, man."

"We were going to do an 11 song record and end it with Vicious, but it felt incomplete. So we decided to end with the Silence, and I'm so glad we did. We'd had the music and the melody bouncing around for about five years, and we always knew it needed a special lyric.

"Every time we tried it it wasn't right, but in the middle of this writing process I made a new demo of it, and Lzzy put a focal down. The vocal you hear is actually from the demo, from the night she wrote it, and she killed it.

"She's such a sweetheart as a human, with such a pure love. To be able to write something using her own personal memories mixed in with this big idea of love outlasting the pyramids, it's beautiful. I'm really glad it made the record."