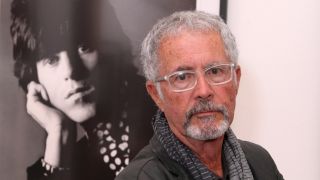 The Beach Boys, Rolling Stones, The Doors, Love and Spirit are just some of the artists Guy Webster worked with at pivotal moments in their lives. He became friends with most of his subjects, partly because he wasn’t interested in the ugly or the reportage side of photography. His method was simply to “make people look beautiful and glamorous.”

Webster fell into his life behind the lens by accident. The son of wealthy Beverley Hills parents – his father was the noted Oscar-winning songwriter Paul Webster – Guy grew up playing with the children of Frank Sinatra and Dean Martin. Candice Bergen was a regular visitor to his home and Jack Nicholson was a teenage pal.

After studying acting at UCLA and political science in Copenhagen, Webster was called up for Vietnam duty but swung a Bilko-style furlough by telling the enrolling officers he was a conscientious objector and practicing Buddhist. “They also thought I was gay but it worked out for me. I was so lucky they put me in charge of decorating Christmas trees and then suggested I enrol at the Art Centre School of Design, which was then the best photographic school in America. They gave me a camera and one roll of 35mm film and told me to take some pictures on a weekend pass. I learnt how to mix chemicals and developed my own modest roll and both my friends and the teachers said, ‘this is actually great!’”

Webster’s father didn’t fancy his son becoming a photographer – he wanted him to go to Yale and get a proper job – but Guy lucked out again when a mafia boss whose daughter he was seeing sent the young lovers off to a garage where the aspiring snapper was given carte blanche to help himself to any equipment he wanted – which happened to be a whole bunch of expensive (and stolen) Pentax gear: cameras, lenses, everything.

After six months of mundane social photography – dogs, cats, babies and weddings – Guy ran into Nicholson and his friends and did their studio head shots. While he was in Hollywood he ran into Lou Adler, who was starting out at Dunhill Records and would later own ABC and Ode, and began shooting album covers. The first was The Rip Chords, a Terry Melcher act for whom he shot a generic surf and hot rod cover, the band staring at a pretty girl in a bikini.

Another burgeoning friendship with the singer and entertainer Bobby Darin pulled in major bucks on a shoot and by 1965 Guy says, “I was working non-stop and making a fortune. By 1966 I had a home in Beverley Hills with four acres, horses and goats that would cost $35 million today. I paid $75,000 then and I was rich — if not quite rock star rich — but still making $4000 a week. I did all the early Mamas and Papas covers for Adler and got friendly with John Phillips before he went completely crazy on drugs and young girls. Luckily I was conservative in my drug use, I just did grass and some LSD. I thought I was a left-wing hippy activist so I drove a modest VW camper in public to ferry the groups around although I actually had a collection of fine motorcycles and cars that I kept to myself.”

The Mamas and The Papas. Taken during the cover shoot for their debut album, ‘If You Can Believe Your Eyes and Ears’.

Webster shot all the picture sleeves for the Beach Boys Good Vibrations single and hung out with Dennis Wilson. “We double dated and I once hooked him up with Miss Santa Monica, who was sitting next to me at a concert in Florida. He asked me, ‘Do me a favour and get her to my house in LA without my wife knowing.’ I also introduced Carl Wilson to both his wives and teamed Dennis up with Karen Lamm, which was tricky because she was then married to Bobby Lamm from Chicago and we were all close pals.”

Webster’s portfolio now included the 1966 cover art for The Stones’ Big Hits – High Tides and Green Grass that he took on location at the water reservoir in L.A.’s Franklin Canyon. He posed the Stones in a line, looking candid and with Brian Jones at the forefront.

As always his silent brief was “I make them beautiful and then they’ll trust me. I was also lucky because this was the time of long hair and that trends to make men look more handsome.”

Webster’s Doors photos are particularly important. He took the band’s debut album cover, a montage, in the same Beverley Hills studio where he’d taken the Stones and the Byrds portraits. “Jim Morrison I’d known at UCLA berceuse we did a philosophy course together. He came in wearing a white shirt with ribbons on that I didn’t like so I asked him to strip bare-chest because I wanted to make him look like Jesus. I made his face large and that pissed off the others but Elektra Records understood. Jac Holzman never interfered. I knew about graphic art and design and the group didn’t. I knew that Doors album would be huge. I also did a fallback cover, shot with a blue effect, but it was too busy.

“Morrison was savvier than most about image. He was very compliant. He put a lot of energy into the shoot, which the other Doors didn’t. But they didn’t have his panache. For the book though Ray Manzarek wrote me a page of reminiscence and that’s almost the last professional thing he did before he died.”

“In 1971 I ran into Jim again in Malibu when he drove past me in a black limousine. I was with Natalie Wood. Jim winds the window down and hollers and I didn’t recognize him. He was overweight and bearded. We had a chat. I told him I was burning out and was going to Spain. He said, yeah? I’m going to Paris for a year at least.’ Never saw him again.”

Webster would also shoot the sunrise/sunset Waiting For Then Sun cover and used a similar technique for Tim Buckley’s Goodbye and Hello album. “For that I had Tim on a the beach. I put a Pepsi-Cola bottle cap in his left eye, God knows why. I used a grainy washed out effect. I loved Tim’s music but on that day he was just a job. I think I did him and two other shoots.”

Webster was at Monterey, shot Captain Beefheart, Simon and Garfunkel (he did their Sounds of Silence cover) and Spirit. “My all-time favourite is The Family That Plays Together cover which is unusually for me in black and white. I wanted to show the rock and roll flophouse, $6 a night motel existence that was reality for many groups. At that time Spirit weren’t getting any money from Adler so it was accurate. I also put them behind a wooden fence in montage style, probably as some comment on the business. Usually I wouldn’t do that because I studied the Renaissance and fine art and I wanted to do portraits that were like Leonardo da Vinci – make ‘em look as good as is humanly possible.

Amongst Guy’s most striking work is his back cover shot for Love’s Da Capo. “The only picture I have left of them is that one. I took seven individual group member shots and fixed them against a white background with Arthur Lee in the prime position, of course. That job literally took moments. Only minutes. I doubt if they were in my studio for even an hour. Arthur shook my hand and said ‘do what you want with the cover, I really don’t care.’ He was nonchalant to say the least.”

Another striking image is Webster’s cover for Nico’s Marble Index album, one of the most sought-after cult items of its day. “I knew of her from some Fellini movie and from the Factory. She was like a Euro-trash model but I liked her singing, her music and her look. She was pretty outside the box. She came in the studio with a druggy beauty and I decided to frame her so her face really stood out. I darkened her hair from blonde and I concentrated on her chapped amphetamine lips. She was beautiful, exotic and wrecked. But whenever I do a talk that cover is one of the most requested. In fact it was selling prints of her that made me realise I could make money out of my old snaps and turn them into a goldmine (laughs) but I won’t make a dime out of this book.”

In a way it’s easier to ask whom Guy Webster didn’t shoot. “The Peanut Butter Conspiracy and PJ Proby didn’t make the book for edit reasons but I never did The Beatles though Derek Taylor wanted me to and they loved the Spirit cover.” It seems that Webster was in line to take the Beatles Hey Jude hits compilation for a while. It’s too bad he didn’t, because the actual cover is the band’s last ever photo shoot and is depressingly lifeless, with John Lennon in particular looking ill and disinterested.

Back to the positive side of Big Shots, and there are numerous images that leap off the page, a lovely image of Harry Nilsson looking young, fresh and healthy (from 1968), the Notorious Byrd Brothers shot (with a horse taking the placer of David Crosby) and iconic shots of Nancy Sinatra, Judy Collins and a Bob Dylan press conference at Columbia Records, where the troubadour catches the camera eye with a knowing glance.

True, there are countless rock photography collections on the market… but this is the best of them all.

**Big Shots is available now direct from Insight Editions, and can also be purchased from Amazon. **