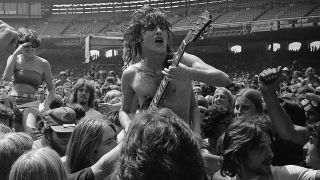 Presenting our no.1 Greatest Album Of The 70s, the connoisseur’s choice!

Sandwiched between the twin peaks of Let There Be Rock and Highway To Hell, AC/DC’s fourth international release didn’t immediately stake a claim as the finest album in the band’s catalogue. That Powerage is the only AC/DC album title not to feature in a chorus speaks of one of its key virtues – subtlety. Granted, there’s little that’s subtle about the throttling riffs on Riff Raff or the crunching Kicked In The Teeth, but elsewhere – on the beautifully lachrymose Down Payment Blues, the playful What’s Next To The Moon, the plaintive, in-the-pocket Gone Shootin’ – ’DC display a discipline, control and restrained power that only the most mature and confident of players can attain. Which helps explain why this is Keith Richards’s favourite AC/DC album.

Emphatically, though, this is Bon Scott’s album. Much of the beauty of Powerage comes from Scott’s brilliantly sketched portraits of disappointed, desperate men pushed beyond breaking point by lost love and empty pockets. As cocksure as he could be – and no other singer before or since swaggered with such Jack The Lad insouciance – Scott always had an affinity for the broken and bruised; that guy with holes in his shoes, holes in his teeth and patches on the patches on his old blue jeans, and Powerage is a celebration of fortitude in the face of soul-crushing setbacks. Crucially, though, there is always hope here, always a glimpse of blue skies for those knocked in the gutter, as evinced by Sin City at the heart of the album, a glorious ‘fuck you’ to the fates, a defiant last hurrah in the face of cruelly stacked odds. After Powerage, AC/DC would get louder, slicker and bigger, but they would never again display this much heart, soul and humanity.

What they said at the time: “Powerage shows AC/DC to have evolved… to full-blown competence.” Circus

I was introduced to AC/DC when we were lucky enough to have them open for us at shows on the Draw The Line tour in 1977. I was absolutely blown away the first time I saw them, and I’ve been a really big fan ever since. Even if you hadn’t heard their songs before, when you saw them live they had everybody on their feet, including me. They didn’t need any production, they didn’t need any lights, they just needed their guitars, their amps and plenty of watts, and they’d destroy the place. They were pretty mellow guys off-stage, but once they stepped onstage, they were on fire. They’re rock’n’roll at its best, the real deal.

All the early records with Bon Scott are great, and Powerage is definitely one of my favourites. To me, it perfectly distilled everything that I like about rock’n’roll down to its essence. As a guitar player, obviously I’m going to be drawn in by the riffs and the way Angus [Young] just tore it up on every solo, but then you listen to Bon’s story-telling and that’s just wonderful.

I got to know Bon pretty well, and spent more than a few late nights hanging out with him, and that guy was the real deal: he was a couple of years older than the other guys, but was definitely part of the family, and he lived the rock‘n’roll life to the fullest. When you heard a song like Sin City, you knew that he’d seen it all, and he understood life. It’s A Long Way To The Top isn’t on Powerage, of course, but when you heard that you knew that he lived and breathed that lifestyle.

People will know Highway To Hell and Back In Black because they’re the albums with the big radio songs, but there’s so many great, great songs on Powerage. People who’re really into AC/DC understand that Powerage is a classic album, a milestone. With each album that came out they were refining their basic sound, they weren’t trying to invent anything new, and by the time they reached Powerage the songs were just getting better and better. I have the album on vinyl and I’d just play it over and over, flipping it and starting again, and it never loses its power. These might not be the AC/DC songs that you hear on the radio or necessarily hear on jukeboxes in bars, but no-one writes rock’n’roll better than this.

I’ll still go to see AC/DC when I can and they’re still a great band. Brian Johnson had such big shoes to fill when he came into the band but he’s done an amazing job and they still kill it. But when I listen to Powerage I hear that amazing band who played 30 or 40 shows with us at the time, and tore it up every single night.

It’s a brilliant record, just pure rock’n’roll, and it will never age.