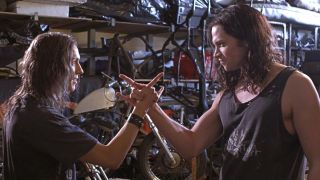 Since first hearing the guttural, neck-snapping abandon of Cannibal Corpse’s Tomb Of The Mutilated, New Zealand filmmaker Jason Howden has longed to make a movie that celebrated both his giddy enthusiasm for ‘80s Kiwi splatter flicks and his love of metal. With the release of his new metal-themed splatter comedy, Deathgasm, Jason has not only fulfilled his dream, but in doing so, he may well have made the most metal movie of all time.

Initially, the plot gallops down the well-trodden path of so many other teenager flicks — two outcasts bond over music while fending off the verbal slings and arrows of their cartoonishly sadistic peers. From this point however, all bets are off. The lads form an extreme metal band and track down a reclusive rock god living in a creepy old abandoned house. He gives them a dark and ancient piece of music, conveniently failing to mention that playing the music will literally summon the malevolent powers of Hell. Naturally, the band play it at rehearsal — wouldn’t be much fun if they didn’t — and from then on, it’s a comically over-the-top joyride through a blood-spattered landscape of demons, zombies, sex toys, decapitations and an utterly brutal black and death metal soundtrack.

Yet unlike most films, where metalheads are stereotypically cast as dim-witted brutes who tend to die early and grotesquely, in Deathgasm, they save the world, almost in spite of themselves. Think Bill And Ted meets Army Of Darkness. Behind sharp dialogue, quick pacing and acres of clever, laugh out loud moments, the film continues to inspire effusive reviews on this year’s film festival circuit.

“The idea’s been in the back of my mind since I was a teenager,” Jason tells Metal Hammer on the heels of a glowing reception at Canada’s Fantasia film festival. “I was a death metal kid back in the ‘90s and my mates and I would watch a lot of splatter films. We wanted to see ourselves doing those things – going out there and kicking ass and running around with chainsaws. There were some heavy metal horror films in the ‘80s but no real splatter ones, I guess. I finally got the opportunity to do it.”

A special effects veteran, making his bones in movies like the Hobbit films, The Avengers and Prometheus, Jason has long resented that metalhead characters are invariably cast as baddies. “I find that with some exceptions, metalheads are depicted pretty negatively in films and television. They all come across as generic bullies in Metallica t-shirts, but that hasn’t been my experience at all. I wanted to tell the story from a metalhead’s perspective – we’re not bullies, we’re not stupid, we’re just normal kids who happen to love metal.”

If this type of film has an achilles heel, it’s the urge to be too clever for its own good, relying on precocious two-dimensional characters spitting out jaded cliches that sound nothing like the way people actually speak. But Deathgasm deftly sidesteps such pitfalls, lovingly embracing its characters for all of the flaws and confusion that underscore their reluctant nobility.

“The whole idea was to celebrate the metal brotherhood and to show the unity in being metalheads. At the end of the day, they’re not the smartest guys and they’re not the strongest, but they’ve got the metal bond that brings them together and that’s how they basically save the world. That’s the heart of the film.”

Though the actors began the production somewhat lacking in metal fluency, Jason quickly brought them up to speed. “I put together a list of bands and genres for them. I was like, ‘This is Obituary, they’re death metal from Florida – listen to this.’ It was essentially a crash course in heavy metal. They were total pros – they got really into it!”

Indeed, Jason insisted on personally compiling the movie’s soundtrack. “I wanted to have the classic genres of metal represented. There’s no metalcore or anything – not because I’m anti-metalcore – but because I wanted to evoke the old school thrash and death metal and black metal. It was based around that time period.”

The 31 tracks include classic cuts from both established bands like Emperor as well as up-and-comers like Skull Fist, Axeslasher, Elm Street and New Zealand’s massive new black metal export, Bulletbelt. In the tradition of other rock-influenced horror flicks, Jason actually approached Bulletbelt about penning a title track for the film.

“I sat down with (drummer) Steve Francis and (guitarist) Ross Mallon and talked to them about getting some of their music on the soundtrack. I put it to them, ‘I love films like A Nightmare On Elm Street III and Trick Or Treat, which have a heavy metal theme song, and that’s what I’m really looking to do.’ Steve’s got an encyclopaedic knowledge of all things metal and he’s also a horror movie fan, so he jumped on it right away and they started cranking. They invited me into the studio to do some death roars on the track, which was awesome!”

“I’ve always been a big fan of classic metal tunes in films,” Steve tells us. “Like Dokken in A Nightmare On Elm Street III: Dream Warriors, Motörhead in Hellraiser III and of course the fantastic Fastway on the Trick Or Treat soundtrack. We knew it had to be a ripping, catchy and memorable tune. I was given the film script to write the lyrics before the film was even made so I had to visualise and feel the vibe of the movie. I think we nailed it.”

Deathgasm is currently making the rounds on the global film festival circuit, with upcoming showings in Germany, Los Angeles and London’s FrightFest at the end of August. If you can’t catch one of those screenings, Jason promises the film will see a DVD and Video On Demand release in both the UK and US later this year.

“The last five screenings have been sold out — people were going crazy and it’s been a lot of fun,” he says. “I think that it’s designed to be watched in a group. It’s not something you watch on a laptop with your headphones on. If you can’t make it out to one of the festivals, then crank it at home with some mates. Turn it into a party! Get some beers, some weed, some munchies and have fun with it! That’s the whole inspiration and how it’s designed to be enjoyed.” We’re two steps ahead of you, mate.

Meanwhile, as Bulletbelt continue work on the follow-up to 2014’s Rise Of The Banshee and prepare for a fall tour with Toxic Holocaust in Australia/New Zealand, they’ve graciously offered to give Metal Hammer readers an exclusive first look at the official video for Deathgasm’s horn-throwing title track.

Find out more on Deathgasm via the film’s Facebook.