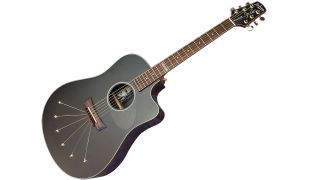 Pictured here isthe unusual yet wholly incredible Steven Wilson ID Series Signature acoustic from Jeff Babicz, which combines the skills of two true innovators. Veteran US luthier Babicz cut his teeth with Steinberger Sound during the 80s and 90s, the company famous for their innovative headless guitar designs (for function more than for style) that wooed players as diverse as Allan Holdsworth, Geddy Lee and David Bowie, while Wilson is one of today’s most revered musicians and composers.

Probably the guitar’s most striking feature is the fan of strings that spread out from behind the bridge and are anchored to the solid Englemann spruce top. This configuration creates a string pull that exerts lateral compression of the wood within the soundboard for a truer acoustic tone. In addition, the design enables the removal of traditional internal X-bracing – a tried and trusted method of strengthening soundboards – in favour of both a less invasive bracing pattern and the inclusion of two semi-parallel braces. The latter enables the string vibration to run along the soundboard’s entire area – a good thing indeed. Other innovations employed on this guitar include a revolutionary split bridge, a ‘continually adjustable neck’ that allows you to alter the string height with the twist of an allen key (a feature more common on electric guitars), and the L.R. Baggs Stage Pro Anthem pickup system that combines a condenser mic with an undersaddle piezo pickup.

All of that sounds good on paper, and in reality is stunning both acoustically and when amplified, making the Steven Wilson ID Series Signature arguably one of the most tonesome acoustic guitars around right now. At £1,995, it’s certainly well worth tracking down.

How Babicz gave an EVH icon a new lease of life

During his time at Steinberger, Babicz built a guitar, a GL2T, for Eddie Van Halen. Immortalised on the 1986 DVD Live Without A Net, it featured the groundbreaking Trans Trem bridge unit, which enables the pitch of all six strings to be raised or lowered simultaneously, without compromising the actual tuning. Check out Van Hagar’s Get Up and Summer Nights for demos of the guitar in action.

In 2015, Babicz revealed that he’d been contacted by Eddie to restore the original guitar. He threw himself into the task and, early in 2016, teased followers of his Facebook feed with a few pictures of the finished article.

“I want to play this guitar again,” Ed (pictured) is reported to have gushed to Babicz. “People want to see this guitar.”

They certainly do. Although the enduring popularity of the EVH range of electrics that he uses today may well scupper any official public appearance of the instrument.