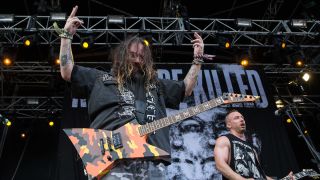 The main talking point at Soundwave Melbourne yesterday (apart from how fucking hot it is) was the first ever show from bona fide supergroup Killer Be Killed.

Combining the powers of Soulfly, The Dillinger Escape Plan, Mastodon and The Mars Volta (although Dave Elitch was replaced by Converge’s Ben Koller for the show), Killer Be Killed is a severely heavy monster that takes no prisoners. Don’t believe us, here’s proof!

Of course, if you’re after some exclusive pics of Killer Be Killed’s FIRST EVER SHOW then look no further than right below this sentence.