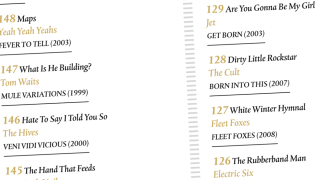 In Classic Rock 200 we counted down the 200 greatest songs of the magazine's lifetime, 1998-2014. Today, it's part three, and Classic Rock's editor Siân Llewellyn writes about four of those songs, and about the bands that made them.

When we were putting together issue #200, the mag staffers picked their favourite album of Classic Rock’s lifetime. And it was a really tough ask. There’s been some incredible music released over the last 16 years. In the end, I whittled it down to a shortlist, and as I truly couldn’t decide (seriously, we’re talking sleepless nights here), I decided to take the matter out of my own hands and let science decide – ie, I consulted the ‘most played’ button on my iPod and let that make the choice from my nominees.

Technology decreed that Bruce Springsteen & The E Street Band’s The Rising was the one. It’s an album I adore. In fact, I think it’s a masterpiece. From Bruce reuniting with the E Street Band to its impeccable songcraft to the way it tackles tragedy in a manner that’s cathartic and never mawkish. It’s triumphant and melancholy, devastating and uplifting. More often than not, all at the same time.

Another record on my album shortlist was Ryan Adams’ Gold. Four days before the Twin Towers fell and the world changed on September 11, 2001, the former Whiskeytown man ventured to Brooklyn to shoot the video for his ode to my favourite city. Armed with an acoustic guitar, Adams with the proud Manhattan skyline as his backdrop sings of Avenue A, the upper west side and his love for this most atmospheric of towns. It’s a fantastic song, full of melody, fond farewells and meaning, made all the more poignant thanks to the film clip.

Oh, and Adams did a brilliant piano version at Abbey Road Studios.

It’s funny the way you discover new music, even when you work on a magazine and things get sent to you every day.

Back in 2011, Metal Hammer Editor In Chief Alex Milas and I bonded over this haunting folk rock duo. Here’s how it went…

On 6 Oct 2011, at 11:19 am, Alexander Milas wrote: And yes, I am completely loving them - wonderful band, need the record! Just picked up on a bit of a buzz after their appearance on Jools earlier this week and I’m totally into them.

On 6 Oct 2011, at 11:32 am, Sian Llewellyn wrote: They really are. I bought it from iTunes back in the summer when Barton Hollow was single of the week on the US iTunes store. I hadn’t realised they were on Jools. Will have to catch it on the iPlayer…

And so it went on. And on. And on a bit more. In fact, every now and then, Alex and I still talk of how bloody marvellous The Civil Wars were. They boiled rock to its barest blues-based essentials and made it their own. Check ‘em out.

I fell head over heels in love with The Replacements when I bought a bright blue vinyl copy of Let It Be on a whim a million years ago. Instantly taken with Paul Westerberg’s ramshackle way with a tune and the musical knife edge the band seemed to walk - one move the wrong way and it’d all fall apart – I went on to devour everything I could find. Fast forward a few years, I’m working on Classic Rock and The ‘Mats as a going concern is nothing but a distant memory. Westerberg was turning in solo albums (in the most part, superb ones too), but still, I wanted his old band back. Then, out of nowhere in 2006, arrives news of a Greatest Hits collection. Yeah, yeah, yeah, that’s all well and good, but what I wanted was something new, but that was never gonna happen, was it? Bob Stinson had died in 1995, Tommy Stinson had been playing bass and acting as MD for GN’R since ’98 and Chris Mars had been concentrating on his painting and showed little interest in returning to music. But, lo, somehow the press release revealed that Westerberg, Stinson and Mars (the latter on backing vox rather than his usual drums) had got together and recorded two brand new songs. Woah. Then I panicked. ‘What if they’re shit?!’ ‘Nah, they won’t be shit’ ‘But what if they are?’ ran my internal monologue. But I needn’t have worried. Both new songs - Message To The Boys and Pool & Dive (the song that made our list) - were perfect slices of Replacements magic.

**You can view the entire 200 tracks in issue 200 of Classic Rock, which can be ordered online from MyFavouriteMagazines. **