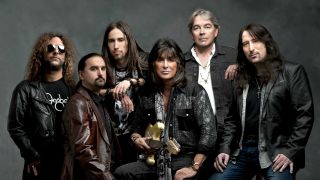 Blessed with extravagant dark and hair and hollow cheekbones, Washington DC-born Meadows was the co-founding guitarist of Angel, best remembered for wearing all-white outfits and a style that fused hard rock, pomp, prog, glam and even pop. Despite having been recommended to Kiss’ label, Casablanca Records, by Gene Simmons, the big time never came and after Angel’s split in 1981 Meadows vanished. A debut solo album, Fallen Angel is his first new music since those days.

After 35 years away, how did you end up returning to music?

I had retired from playing but I found an Angel fan page on Facebook a few years ago and realised how many people still remembered the band and were touched by us. I agreed to do an internet radio interview, and so many people tried to listen in that the website crashed. I was dumbfounded. And then I started to get offers of record deals.

Bizarrely, you had owned and run a tanning salon in Oakton, Virginia?

I had several businesses, including property. But yeah, I had four salons and I loved it. It was a really upscale clientele… a lot of pretty girls. But I never stopped playing guitar or writing songs.

Did you miss being a quote-unquote rock star?

Yeah. I was happy with my businesses but I would watch That Metal Show and wish I was up there. But all of it seemed too far away. Now I’m doing it again I’m ecstatic.

Yeah. I love heavy stuff and really poppy things. For me it must have a strong chorus and melody but I also love big guitars. I wanted to make a record that people can sing along with, and not just heavy metal.

In the early 1980s you turned down the chance to replace Ace Frehley in Kiss?

That’s not strictly true. I auditioned for Kiss and they offered me the gig but at the same time Gregg [Giuffria, keyboardist], Barry Brandt [drummer, also of Angel] and I were trying to get our own band, Legend, off the ground. When I told Gene, he was so insulted he and Paul Stanley left the room. They were going to offer me $200,000 a year plus points [a percentage of record sales], but I didn’t say yes or no.

That around the same time that same sense of loyalty nixed another job with Aerosmith.

Yeah, exactly. David Krebs [Aerosmith’s manager] was a friend of mine, and he had also asked Mickie [Jones, bassist who died in 2009] to join the New York Dolls when we were putting Angel together. There were a few such opportunities, I guess I was a fool.

To some Angel were just too theatrical, they felt the image overshadowed the music?

I can understand that, and we did have big show. But look at Alice Cooper and Kiss, lots of bands did that. And I always wanted to go and see something that was a little more than just a rock show. On our final tour we gave in to the pressure and played without costumes and then we got complaints. It was a catch 22.

Being signed to Casablanca at Gene’s behest fostered a presumption that Angel were just Kiss Junior.

[Sighs]: Yeah. But a lot of people thought we were better than Kiss. It was often said that we were far better musicians.

Did watching Jagger and Scorsese’s music industry series Vinyl remind you of visits to the Casablanca Records office?

Haha…I loved that show, and I heard it was based on the Casablanca story. When we first went there the label was based out of Neil Bogart’s house. Neil wasn’t like Richie Finestra but there were similarities; you’d go into Casablanca and there’d be a bowl of blow on the table, everyone smoked joints. It was the golden era of music.

In 1976 Frank Zappa and his band paid tribute to your “beautiful shiny hairdo” and “insolent pouting” with the song Punky’s Whips. Did you consider that an honour?

I had to okay its release. The song was originally called Punky’s Lips. It said that my style is ‘more fluid than Jeff Beck’. I knew it was satirical and not intended as mean, so I wasn’t insulted. It’s kind of humorous. In fact, Zappa asked if I would go onstage with him in LA in costume and play the song. I agreed but the rest of the band got jealous so that didn’t happen. I did go to the show, though, and it felt like being on Dean Martin’s Roast, but I was fine with it.

You were recently reunited with the rest of Angel to receive an honour at Vegas Rocks Hair Metal Awards. It was the first time the five of you had been in a room together in 35 years. Such experiences can be awkward, how was it?

There was no tension. It was a very emotional experience. A few of us got teary-eyed, hearing those stories again made Gregg [Giuffria] a little weepy. When we first got together we had felt like we were going to conquer the world, and it was great. We felt like a gang again.

The awards show was surreal. The Scorpions and Twisted Sister were there with a lot of other big acts and some of them played, but when we were introduced we got the night’s biggest ovation. But I guess we did start the big-haired rock thing.

Last year Frank DiMino made a similar comeback to your own. You must have discussed working together again as Angel?

Yeah. People have been trying to do that for a long time but I’ve always said that somebody would have to bankroll it. Putting on white jeans and a white T-shirt would tarnish Angel’s past – it’s a good show or nothing. Gregg made a lot of money from the gaming industry and was getting quite emotional about that idea, so we’ll see.

We couldn’t go on tour and be Angel again, that’s in the past. But doing two final shows to cap it all off, that’s something I’d never say never about.