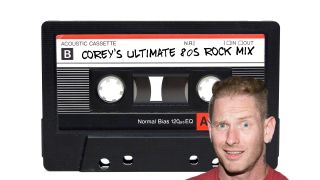 ELECTRIC BOYS – All Lips and Hips (1988)
“This song has stuck with me over the years because of its backbeat, its big-ass chorus and its novel use of a sitar. It’s got great suggestive lyrics – standard operating procedure in the 80s – and pretty gritty guitar tone for that time. I still listen to it when I’m cruising in my car.”

ZODIAC MINDWARP AND THE LOVE REACTION – Prime Mover (1987)
“Not obscure, but I’m sorry, this song is a pure ripper! I remember seeing the video on Headbanger’s Ball and when the nun’s head exploded, INSTANT NEW FAVOURITE. And Zodiac Mindwarp definitely has a way with self-aggrandising metaphors. Total barnburner.”

QUIREBOYS – 7 O’CLOCK (1989)
“When I heard this song, they were called the ‘London’ Quireboys – leave it to America to make you change your name – but I still loved the song. It’s a great blend of the Stones and Rose Tattoo. My friends called it ‘Booze Rock’. I just called it Good Shit.”

MICHAEL MONROE – Dead, Jail Or Rock N’ Roll (1989)
“I was the only one of my friends who knew who Hanoi Rocks were, so when Monroe dropped this solo album, I was ready. It did not disappoint. The pre-chorus on this song is so catchy it’ll change YOUR name. Brilliant.”

AEROSMITH – St. John (1987)
“This is a deep cut on Permanent Vacation, and it’s one of my all-time faves of this band PERIOD. It’s dark and bluesy, and the guitar tone that Joe Perry brings out is fucking fantastic.”

VAIN – Beat The Bullet (1989)
“Davy Vain still plays in Japan, which is a GOOD thing. I loved this tune because it was fairly simple but had a lot of attitude. I’ve got a live bootleg somewhere that could punch you in the mouth – great tune.”

MOTÖRHEAD – Cradle To The Grave (1989)
“This was a B-side and one of the grimiest songs ever recorded. I once threw a microphone stand at a cement wall while singing along to this killer. The stand bounced back and smacked me in the eye – I still have the scar.”

FASTER PUSSYCAT – Babylon (1987)
“I couldn’t resist; I absolutely love this song. Seemed like every band had a weird tune on their albums for a while, but this song was really different. Great chorus – makes me forgive them for stealing lyrics from Cheap Trick’s She’s Tight and using them in Bathroom Wall.”

BANG TANGO – Someone Like You (1989)
“Say what you want, this fucking song is ridiculously awesome. The guitar work alone on this tune was enough to make me love it, but then Joe Leste’s vocals are extra ragged and raw. I still own this album and pass it on.”

BULLETBOYS – Smooth Up In Ya (1988)
“This single was hugely popular in the US. But even after the band jumped the shark by trying to cover Tom Waits, I continued to love this song well after it wasn’t cool to do so. Plus, the rest of this album crushes.”

Corey Taylor’s latest book You’re Making Me Hate You is out now. Corey will perform a one-off show at London’s Koko on May 8. For more details, see the venue’s website.