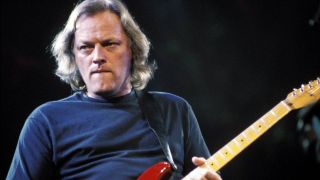 Pink Floyd were no strangers to the live spectacle. They’d pioneered the rock light show in the late 1960s, played in the ruins of Pompeii in 1971, and famously built – and then knocked down – a giant wall on stage in 1980. But their free performance on a barge floating on Venice’s Grand Canal on July 15,1989 took things to another level. What the 200,000 fans gathered in the Italian city, and the 100 million people watching on satellite TV didn’t know was that this Floydian extravaganza risked damaging the sinking city’s foundations – and provoking the ire of an army of gondoliers.

David Gilmour: Initially Steven [O’Rourke, Floyd manager] was very against the idea of playing Venice, saying it would be too difficult. Throughout the second leg of that tour he’d come up to me and say: “It’s never going to happen”. I said: “Steve, if Venice doesn’t happen, you’re fired”. Or something like that.

Mayor Antonio Casellati: I was the mayor when the prefecture [the non-elected city council] agreed with the organisers to authorise the concert to go on. I was categorically opposed, while my vice-mayor was in favour of the show to go on.

David Gilmour: There was a big row on the Venice council. Some people there wanted to get others off, and they used this issue to discredit them. We were political pawns.

Mayor Antonio Casellati: During the city council meeting, I was absent and the council agreed to give the permission for the concert. This also came about due to threats of financial lawsuits against the city.

Neil Warnock [Pink Floyd booking agent]: The show was free to the audience, with the costs mostly being picked up by the company that was doing the satellite broadcast around the world.

Nick Mason: To be fair, the council probably accepted something for free, and then realised there’s actually quite a lot of expenses involved. We were putting on the show, but we had made no provision in our budgets for portable loos or anything like that.

Fran Tomasi [promoter]: From a professional point of view it was the most complex project I’ve ever realised, and it was possible thanks to a close- knit and enthusiastic team.

Nick Mason: The issue of sound levels had come up at a number of concerts in different locations. Do the enormous sound volumes cause damage to the fabric of historic structures?

David Gilmour: A PA sitting a quarter of a mile out in a lake is going to damage buildings that have been there for 700 years? Give me a break.

Guy Pratt [bassist, Pink Floyd]: Venice is spectacularly beautiful, of course, but it doesn’t actually have a big enough venue for a band like Pink Floyd to play in. So to get round this they got hold of a North Sea oil rig, built the stage on top of it, sailed it up the Grand Canal flying the Jolly Roger, and moored it opposite the Piazza San Marco.

Robbie Williams [tour director]: It was actually a large flat barge used to transport and service oil rigs. We recruited a tug-boat skipper and diver from the South Coast to assist with the marine aspects, and he sourced the three barges that we used – main stage, backstage and front-of-house. We loaded the production trucks on to the barge at a dock in Venice, having built the stage, roof and wings etc. It was then towed into position down the main ‘drag’ in front of St Mark’s Square, thereby avoiding the narrow canals.

David Gilmour: Most of the residents just left town and hoped Venice would still be there when they came back Monday, and if anything had gone wrong they’d blame us.

Mayor Antonio Casellati: The city of Venice received a big blow as a consequence of the Pink Floyd concert. The city was invaded by masses of people that converged on St Mark’s Square. Venice is invaded by many people during the Venice Carnival, but the difference is that they are scattered around the city and not in one area.

Guy Pratt: We were staying in the Excelsior Hotel, which was out at the Lido, and it was quite difficult to actually get to the main barge, because there were so many gondolas and other boats clustered around that area. One interesting detail is that although the canals and the settings were distinctly unusual, as soon as we reached the barge everything became comfortingly familiar. I climbed up the same old flight of stars, past the usual backstage snug. The stage area was set up identically wherever we were playing. It felt almost like home.

Just before the show started, the head of the gondoliers’ union came to see Steve O’Rourke.

David Gilmour: They threatened that if we didn’t give them $10,000 immediately they would fill the entire space up in front of the stage and blow their whistles all the way through the show.

Nick Mason: We reckoned that 100 decibels of our sound system would probably outweigh their whistles. By then we were beginning to get a little beady at the ingratitude – particularly as the gondoliers had all rented their boats out for people to sit on to watch the show.

David Gilmour: So we said, “Fine, come back at the end of the show and we’ll give you the $10,000”. And when they did we said, “Piss off – you missed your chance”. There were other things where we had to bribe people to make things happen, where again they had agreed on something and then reneged, and you have to say, “Take this money and do it”.

Nick Mason: It was quite difficult, especially as show time got closer, to get to and from the barge. Michael Kamen, for example, was going to play [piano] with us. It was all geared up for him, but he couldn’t get on to the barge in time. He got as far as the mixing desk, 200 yards away on the shore, and had to watch it from there.

Neil Warnock: Some of us were in a hotel overlooking the Grand Canal, and I remember looking out and seeing all these people swarming over the little bridges across the canal. People were even hanging off the sides of the bridges. I began to get worried that all that weight might cause a bridge to collapse.

Guy Pratt: The view from the barge was fantastic – looking out across the Piazza San Marco from the lagoon, a fabulous setting. Directly in front of the stage there were hundreds of people watching us from boats, which was very strange, and, beyond them, hundreds of thousands in the piazza.

Just before the show started, a barge full of champagne-swilling, canapé-nibbling dignitaries parked their vessel right in front of the stage.

Nick Mason: We’ve always believed it was the councillors who had made things difficult for us. They’d got an official barge and decided to moor it right in front of the stage – to the fury of the crowd. We were really rather pleased when the crowd took it upon themselves to start hurling whatever they could at the barge. It was very amusing: the waiters assembled like Roman centurions and used their trays as protection from the barrage. They then found somewhere more suitable to moor.

David Gilmour: We had a specific length of show to do; the satellite broadcasting meant we had to get it absolutely precise. We had the list of songs, and we’d shortened them, which we’d never done before. I had a big clock, with a red digital read-out, in front of me, and had the start time of each number on a piece of paper. If we were coming near the start time of the next number, I just had to wrap up the one we were on. I was nervous. Playing live to 100 million people. It gets to you at times.

Guy Pratt: I think it was just about the only time I’ve ever heard a trace of nerves in his voice but, even then, that was only between the songs.

David Gilmour: As we finished, the council’s own firework display started and the volume was 10 times anything we put out. If anything caused a problem, it was that. Bass frequencies from a huge stack on land could maybe shake things up a bit. But we were on water, and water is a very effective insulator. We had a really good time. But the city authorities who had agreed to provide the services of security, toilets, food, completely reneged on everything they were supposed to do, and then tried to blame all the subsequent problems on us.

David Gilmour: Along one of the main waterways is an island called the Giudecca, and they’ve got a pontoon bridge all the way across, which they’d agreed to open up for us early the next morning to let us float the whole stage through, towed by tugs. They then refused to open it, so we had to tow this vast stage the size of a football pitch out into the open sea. Then the sea police came boarded and said: “You can’t come this way.” We said: “They won’t let us through that canal where they’d agreed”. So we had to pay out.

Mayor Antonio Casellati: After the concert the newspapers were furious and criticised us. The Court of Auditors called us for accountability. We were absolved of any wrongdoing, but the consequence for me was that I had to resign as mayor.