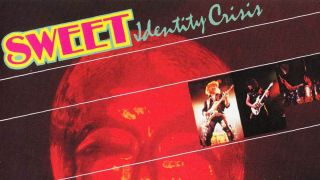 It was 1981, and things were not looking good for The Sweet. After dominating the charts in the UK during the height of the glitter rock era, the band had been on a devastating downward spiral ever since. Lead singer Brian Connolly’s rampant alcoholism was hastening their doom. Gigs, big ones, were blown by his sloppy, tragic performances. Glam was out, at least back home, and Chinn & Champman, the behind-the-scenes songwriters who penned Sweet’s biggest hits, had moved on to new wave.

The band itself had been waging a war of identity for years, inching ever-closer to the storming hard rock they loved, but never able to shake their teenage bubblegum image. And so, their last gasp, the aptly titled Identity Crisis. Three quarters of the band were still on board – guitarist Andy Scott, bass player Steve Priest, drummer Mick Tucker. Connolly was lost in a mist of booze and regret. The album bore no hits, and was only released in Germany at first. It got a wider release in 1982, but by that time, The Sweet had already broken up. The album stiffed, the dream was dead, and rock’n’roll went on without them.

Like many bands, The Sweet had ground themselves into bitter, bloody nubs by the end. A decade earlier they were a neon-streaking, star-spangling, eight-armed jukebox of a band, spewing one chewy-chewy bubblegum hit after another, four glittery proto-flash metal gods bedecked in mascara, capes and thigh-high boots, comic book superheroes riding a sugar high to the top. But then the records stop selling and the puppetmasters behind the scenes cut their strings, and it all went straight to hell. But if you keep a close eye on the timeline, The Sweet basically limped to their inglorious finale the same year that flash metal caught fire in LA.

The death of the original Sweet coincided with the bands that would replace them – Motley Crue, Ratt, Quiet Riot, Poison, etc. Outside of the New York Dolls, who were a cult act even in their prime, and Kiss, were very clearly their own specific brand, the US had no history of glam. Everything these bands learned, they learned from the early ‘70s British glitter brigade – Bowie, Slade, T Rex and The Sweet, basically. And of those four, The Sweet were clearly the harbingers of things to come. Their whole career was basically a struggle to become a metal band, after all.

Aside from Quiet Riot’s affection for Slade, the influence of UK glam was downplayed by the Sunset Strip bands, probably because so many of them were basically barbarians in perms, macho chest-thumpers who cited AC/DC and Zep and Sabbath as influences, even though half of early ‘80s glam metal hits are basically Blockbuster cranked to 11. And really, a lot of the early Hollywood bands looked like they picked their outfits from The Sweet’s dumpster.

So it was a real shame the way things shook out. After all, it’s not like it was impossible to crossover from the ‘70s. Glam metal warmly embraced Kiss, Whitesnake and Ozzy, after all, so why not The Sweet, especially when they sacrificed so much to bring cheeseball glam with heavy metal guitars to the masses? Jesus christ man, this was their fuckin’ party, and they weren’t even invited.

Which is not to say they didn’t try to get in. As far back as 1984, Andy Scott and Mick Tucker were fitfully forming new incarnations of The Sweet, largely with NWOBHM cast-offs. Brian Connolly had a separate Sweet at the time, as well. Eventually lawyers got involved, devolving the brand into “New Sweet” and “Andy Scott’s Sweet”, neither of which caught hold. Eventually Connolly died. So did Tucker. And the Sweet wars dragged ever on, blowing right past the flash metal era, the grunge era, the nu-metal era, and even into this bizarre up-is-down climate of laptop superstars and Axl/DC.

I fear that we will all be dead and the Sweet Wars will still rage. Currently Steve Priest is touring with an LA version fronted by Heaven & Earth mainman Joe Retta, while Andy Scott continues to trudge forward with his ever-revolving line-up. In 2012, Scott’s version released the endearingly bonkers New York Connection album, wherein Scott mashes up Sweet hits with covers of (mostly) New York-based bands/songs. The Sweet’s own Ballroom Blitz merges into Blitzkrieg Bop, for example, and New York Groove somehow loops in Jay Z’s Empire State of Mind. It’s mad science, but it actually works. But even so, it’s no return to former glories.

Clearly, The Sweet lost the plot. Ultimately they are as responsible as we are for their glaring omission in the sequin-studded history of flash metal. They could not have come with a better title for their last proper album. This whole six-decade debacle has been one long, troubling Identity Crisis. But let’s pause for a moment and heap some well-deserved praise on the classic line-up/era of The Sweet. They basically invented ‘80s glam metal in sound and vision with style and razzle-dazzle showmanship and some of the greatest pop songs ever written.

Think about it, man: Fox On The Run, Ballroom Blitz, Love Is Like Oxygen, Blockbuster, Wig Wam Bam, Teenage Rampage, Action, Little Willy… could there have really been a Poison or a Def Lep or even a Hanoi Rocks without them? Maybe, but they wouldn’t have been nearly as fun. The Sweet made gloriously ridiculous, over the top rock’n’roll and they did it while wearing the shaggiest haircuts and shiniest boots possible. And if that’s not Motley fucking Crue, then I don’t know what is.

Next week: Sixes, Sevens and Nines

The 10 best songs by The Sweet, by Wednesday 13